The Chief Justice holds a variety of responsibilities including acting as the administrative head of the Nevada Judiciary as well as the official public voice of the Nevada Supreme Court. 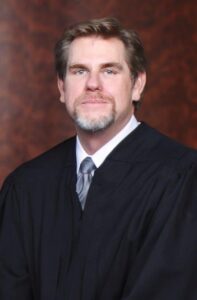 “It’s an honor to serve as Chief Justice, and I’d like to thank Jim Hardesty for his service and leadership over the past year,” Parraguirre said. “With the assistance of the Court of Appeals, we have been able to significantly reduce the backlog of pending cases to less than 1,000 cases. This is remarkably lower in comparison to the number of pending cases in the preceding years.  As we move into a new year, I plan to continue our support of the Court of Appeals so that the appellate courts can continue to resolve more cases and issue more opinions for the people of Nevada.”

Over the course of 2022, Parraguirre said he will also focus his attention on the trial courts.

“The backlog of trial court cases is a concern,” said Parraguirre. “As a result of the COVID-19 pandemic, courts were forced to significantly curtail many of their core functions.  This created an unprecedented backlog of cases in many jurisdictions that judges throughout the state are diligently fighting to resolve.  I want to ensure every possible resource is available to assist them in their efforts.”

During his three terms on the Nevada Supreme Court, Parraguirre has served on numerous committees and commissions, including the Court’s recently formed Commission to Study the Adjudication of Water Law Cases. He is currently in charge of the Senior Judge Program as well as the Court’s Settlement Program.

He previously served twice as Chief Justice of the Nevada Supreme Court in 2010 and 2016, and will serve as Chief until the end of 2022. He intends to file for re-election in March 2022.