You are here: Home / Press Release Wire / Snoopy and the Red Baron: New Exhibition at the Brewery Arts Center

Snoopy and the Red Baron, a traveling exhibition on view at the Brewery Arts Center, from February 19-May15, 2022, celebrates one of Snoopy’s most recognized personas. Learn about this favorite storyline in Peanuts through high quality reproductions of original comic strips and discover the rich World War I history Schulz used in nearly every strip. 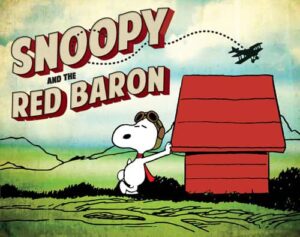 Visitors will have ample photo-ops next to Snoopy’s doghouse to share on social media. When asked about the origins of Snoopy’s aviator role, Charles Schulz credited his son Monte’s interest in making plastic airplane models as his chief inspiration. Schulz described drawing a little helmet on Snoopy after seeing Monte’s World War I aircraft models, and “suddenly got the idea for it.” He also cited 1960s events that commemorated the start of World War I, and movies such as The Dawn Patrol. He immediately recognized the potential of the Flying Ace, acknowledging, “I knew I had one of the best things I had thought of in a long time.”

Throughout the decades, Snoopy comically embraced his fighter pilot role for delighted Peanuts readers. As Snoopy envisioned himself soaring through the clouds in pursuit of his nemesis, the infamous Red Baron, he sat atop his doghouse, which he imagined to be a real British biplane known as a Sopwith Camel (Schulz once said, “Can you think of a funnier name for an

airplane?”). He wandered through parts of Europe that World War I aviators genuinely traversed, stopping in cafés to quaff root beers and flirt with French mademoiselles. In everything he cartooned, Schulz strove for authenticity, a point made especially clear by his Flying Ace storylines.

Beyond the comic strip, Snoopy as the Flying Ace prompted the manufacture of countless memorabilia items, including toys, games, music boxes, and puppets. Fans dressed up their dogs in flying caps and goggles, and Air Force squadrons adopted Snoopy as a symbol of their patriotism. This most famous of all Snoopy’s personas continues to bring humor and nostalgic joy to Peanuts fans all over the world.

“I don’t think there has been an animal character in a long time that has done the different things that Snoopy has done,” Schulz once reflected. “He’s an attorney. He’s a surgeon. He’s the World War I Flying Ace.”

The Brewery Arts Center will have a grand opening to the exhibition at 5:00pm on Saturday, Feb. 19, 2022 and activities each month of the exhibition. The gallery hours will be Tuesday through Sunday from noon to 4pm, Thursdays from noon to 7pm and for special events. Entry will be for a suggested donation of $10 per adult and $5 for students and seniors. More information will be available on the Brewery Arts Center website at breweryarts.org or by calling 775-883-1976.

Snoopy and the Red Baron is organized and toured by the Charles M. Schulz Museum and Research Center, Santa Rosa, California. It is sponsored locally by the Carson City Cultural Commission and the Nevada Division of Tourism.