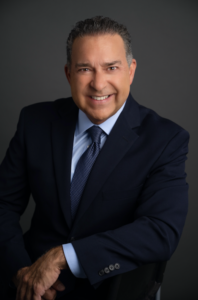 “Like many Nevadans, I have grown increasingly frustrated with the lack of transparency in our election process,” said Ramalho. “We need to have confidence that the will of the people is being met and minimize the opportunities special interests have to influence the outcome of our elections. That’s why I’ll push for Voter I.D. and fight to eliminate the practice of ballot harvesting. Together, we’ll make it easier to vote, but harder to cheat!”
After a journalism career that included 21-years as an anchor and reporter in Las Vegas, Gerard will now direct his leadership skills toward service to Nevada’s citizens. Gerard brings a unique perspective having covered many of Nevada’s biggest stories over the past two decades and will be a strong voice for the business community. He will fight to ensure that “all” businesses are considered essential, and “all” have the same rights as others.
Gerard’s parents taught him the value of faith, family, and freedom. His mother grew up in Mexico City and later became a naturalized U.S. Citizen and his father is a WWII U.S. Navy Veteran. Those principles will continue to guide him as he serves Nevada. In addition to his reporting career Gerard has worked as a media liaison, board member, and advisor to several local non-profit organizations, promoting veteran’s causes, childhood nutrition, and victims of domestic violence. His level of commitment to community is needed in our state government.
Gerard’s announcement video:  https://www.youtube.com/watch?v=10Sldi3bxeE
To donate to Gerard’s campaign:  https://secure.winred.com/gerard-for-nevada/donate
To find more about Gerard’s platform and his candidacy, please visit www.GerardForNevada.com