You are here: Home / Press Release Wire / Pigeon Head and Pioneer: Cast Your Vote on the Signature Beer at the Theater 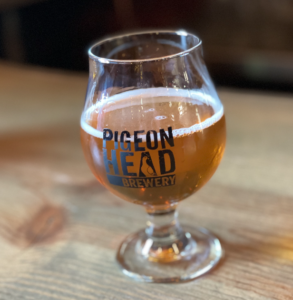 Pigeon Head Brewery and Pioneer Center for the Performing Arts are searching for the best beer for the big stage. The community is encouraged to vote for their favorite beer to be served at all performances as well as the popular “Broadway Comes to Reno” series this fall. The winning brew will be shared at every concession stand as the Pioneer Center’s official partner beer. “We are beyond excited to get started narrowing down the feature beer for the Pioneer Center,” said Bryan Kenneth Holloway, co-owner and brewmaster for Pigeon Head Brewery. “This will give folks the opportunity to enjoy many of our great offerings including lagers, pilsners, IPAs, and more.” Holloway acquired a bachelor’s degree in Music Education from the University Nevada. Although he went on to join the beer industry, he continues to be an avid supporter of local music and arts programs and now has the opportunity to support such programs through the various charity events throughout the year.

DETAILS:     Pigeon Head Brewery and Pioneer Center for the Performing Arts ask public to pick featured beer to be served at all performances.

To participate, guests are encouraged to visit Pigeon Head Brewery and order a Pioneer sampler, consisting of 3 8oz. flight. They vote for their favorite by scanning a special QR code and share on their social media platform. For every purchase of an accompanying 4-pack or 6-pack, a portion of the proceeds will support the Pioneer Center for the Performing Arts and guests will be entered to win a Pioneer and Pigeon Party Pack.

Pigeon Head Brewery was founded in May 2014 with the inclination to brew traditional German-style lagers. As our love for lagers grew, so did our desire to explore the many other styles that craft beer has to offer. Our taproom is a great place for the beer drinking community to unite. Stop by to enjoy weekly beer specials and pick up a case to take home. Indoor seating with views of the brew house and outdoor patio seating (weather permitting) are available for groups of all sizes. Special events and parties welcomed. For more information, visit pigeonheadbrewery.com or call (775) 276-6766.

About the Pigeon Head Brewery Brewmaster

Bryan Kenneth Holloway was born and raised in Carson City, Nevada. After High School, he attended the University of Nevada where he acquired a bachelor’s degree in Music Education.  Bryan’s love for brewing started in his college years with a small homebrew setup in his garage which eventually turned into much more. He went back to school where he completed the International Degree in Brewing Technology from the World Brewing Academy. This is a dual campus degree in both Chicago, IL and Grafelfing, Germany. After a short time brewing in Temecula, Ca at Wiens Brewery, he returned to Reno where he accepted the Head Brewing position at Pigeon Head Brewery in November of 2014. In December of 2017, Bryan and his business partner Peter, purchased Pigeon Head Brewery. Bryan and Peter joined forces and turned their aspirations of brewery ownership into a reality. They continue to work tirelessly in an effort to launch Pigeon Head Brewery to the next level in a mission to produce world class beer with a passion for quality.

About the Pioneer Center for the Performing Arts

To learn more about Pioneer Center for the Performing Arts or how to donate, visit https://pioneercenter.com/, For administrative services call 775-686-6610

Crisp, clean, and refreshing. A golden colored, bottom fermented lager beer that is light in body. This highly attenuated lager lends a dry to medium-dry finish. The beer showcases the finest quality malts and hops imported from Germany.