The Levitt AMP Carson City Music Series presented by The Change Companies is back and better than ever.  So grab your family, friends and neighbors and get ready to experience the power of free, live music to bring our community together! 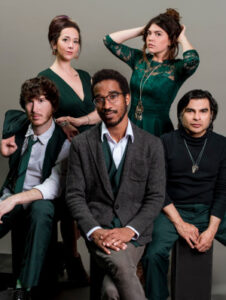 Sponsored in part by the Mortimer & Mimi Levitt Foundation, a national funder of creative placemaking that empowers communities to inject new life into underused public spaces through free, outdoor concerts, the Levitt AMP Carson City Music Series will present 8 free, family-friendly concerts to the public this summer at The Change Companies stage at the Brewery Arts Center.

This Saturday, August 21 the show starts at 7pm with Sacramento band Bad Mother Nature for an opening set and then at 8pm Los Coast takes the stage.

The visionary band from Austin, Texas, Los Coast, always delivers a punchy, yet soulful psychedelic-pop that can seamlessly incorporate a wide-variety of genres: psychedelic funk, rock, blues, jazz, and singer-songwriter pop. Everything is guided through the band’s understanding of music appreciation theories. Los Coast is the brainchild of guitarist Trey Privott and guitarist and keyboardist John Courtney. Even before the release of their debut album, they band earned a reputation as one of Austin’s most exciting up-and-coming talents. Sharing a love for music and fun with their band mates, Megan Harmant on bass, Damien lanes on drums, and Natalie Wright on the keys, Los Coast is becoming known for their rousing and expansive live sets.

The final headlining concert for the season scheduled on August 28 is the band who opened our very first Levitt AMP concert in 2016, Mumbo Gumbo with Moons of Jupiter opening.

The public is invited to bring their own picnics, blankets and lawn chairs to the concerts, which has an open setting. There will be food trucks, drink vendors and kids activities at every concert. The Levitt AMP concert series is located at 449 West King Street at the corner of King and Minnesota Streets. Admission is free.

Please bring a mask to wear if you head inside the buildings to use the bathrooms.  We appreciate the public’s cooperation as we follow and enforce the current COVID-19 safety guidelines for each show as we know that these guidelines may change throughout the season. Visit breweryarts.org for a full schedule of concerts, directions and information on parking and wheelchair accessibility.

Also during the concert, join The Brewery Arts Center and Immunize Nevada for a free Covid-19 Shot Clinic!  The clinics will be held during the Concert Series in the Art Classroom at the BAC every Saturday in August from 6-9 PM.  No appointment or insurance needed!  There will be all sorts of goodies & giveaways and freebies to all who get a vaccine, including a Free Jell-O Shot with vaccination if you are over 21!

Since 2016, Carson City was named one of 18 small to mid-sized towns and cities across America to win a Levitt AMP [Your City] Grant Award of $25K in matching funds to present a free concert series

at what is now, The Change Companies stage in 2021. The Brewery Arts Center submitted the Levitt AMP proposal and is presenting the concert series. In an effort to inspire and engage communities across the country around the power of creative placemaking, the Levitt Foundation invited the public to choose the Top 25 finalists through online voting. Learn more about the winners and the 180 free Levitt AMP concerts across America at http://levittamp.org

About the Brewery Arts Center

The mission of the Brewery Arts Center is to enrich the quality of life by cultivating arts and culture for all. Founded in 1975, by a group of artists yearning for a space of their own, who raised $300,000 to purchase the Historic Carson Brewing Building and turn it into a community gathering space for artists.  They then proceeded to build an annex for a gallery, art classroom, a black box theater and the Brewery Arts Center (BAC) a Nevada non-profit organization was born.  In 2000, the organization purchased the St. Teresa Catholic Church building and converted it into a 250 seat Performance hall and in 2015 was able to close the road to traffic in between the two buildings to create a two city block arts campus complete with facilities for visual arts, theatrical arts, dance and music, and outdoor art to include a Harmony Sculpture Park, murals, rotating sculptures and in the summer months, an outdoor amphitheater.

The Change Companies has come on board once again as this year’s title sponsor.  The Brewery Arts Center is proud to be aligned with such an important company comprised of a team full of warm, hard-working and talented individuals, driven by their shared mission of promoting positive behavior change.  It’s a perfect fit for this series.

The Mortimer & Mimi Levitt Foundation is a national funder of creative placemaking that empowers towns and cities across America to transform underused public spaces into thriving destinations through the power of free, live music. In 2019, more than 550 free Levitt concerts will take place in 26 towns and cities, all featuring a rich array of music genres and high-caliber talent. Learn more at levitt.org.