The Pioneer Center for the Performing Arts announced that Christopher Daniels has joined the organization as the Theater Services Coordinator. 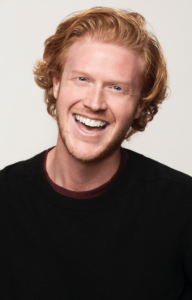 Christopher Daniels is a celebrated artist with over fifteen years of experience in performance theatre. After graduating from the University of Wisconsin-Madison with a B.A., majoring in Psychology and minoring in Women’s Studies and Lesbian, Gay, Bisexual, and Transgender Studies, Christopher Daniels moved to Reno in the summer of 2009. He immediately became immersed in the Reno Arts Scene. First as a principal player in Reno’s number one comedy troupe, The Utility Players, and then as a local actor on the stages of Bruka and Good Luck Macbeth. He has written three solo performance shows: “Undressed”, “I’m Spiritual and all I have to show for it is this award” – inspired by when he won Best Spiritual Advisor/Minister from the RN&R – and “Miss Ginger Devine Presents: The Come on her Back Tour”. He has proudly served as the Executive Director of Good Luck Macbeth for the past 7 years, an edgy and contemporary theatre company in the vibrant Midtown district of Reno, and more recently was the Theatre Outreach Director for the Cordillera International Film Festival. Daniels is excited to bring his knowledge about and passion for live theatre to the Pioneer Center.