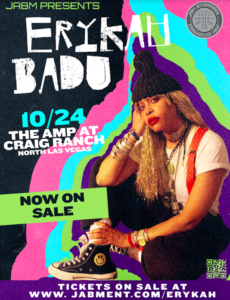 LAS VEGAS, NV – On Sunday, October 24, R&B sensation Erykah Badu will be performing in Las Vegas, as part of her national tour.

Often compared to Billie Holiday, Erykah Badu is an R&B artist that rose to fame thanks to her albums Baduizm and Live, which are certified triple platinum and double platinum, respectively. Badu was recognizable throughout her career for her eccentric style and music which combines a contemporary blend of soul, R&B, funk, jazz, and other progressive, soulful styles.

As an actress, she has appeared in major Hollywood films including Blues Brothers 2000, The Cider House Rules and House of D. She also has appeared in the documentaries Before the Music Dies and The Black Power Mixtape 1967-1975.

Jayson Sawyer, the CEO and Founder of JABM, is looking forward to bringing national talent to local venues off the Las Vegas Strip. “Many of my friends and family are locals in Las Vegas and because we are such a tourism-based city, often it’s the locals who get bypassed when their favorite artists come to Las Vegas,” said Sawyer. “I wanted to make sure they know we are a community-based company and want to make these events as accessible as possible, which is why we chose Craig Ranch Park as the home for this specific event.”

General admission tickets for the show are on sale beginning Friday, July 23 at 10 am for $65. Day of Show General Admission tickets cost $75 and Reserved Seating is priced at $150.

For more info on this event, visit https://bit.ly/3kAPOiC.

JABM connects communities by promoting live entertainment events and curated experiences to change the status quo in the industry. Jayson Sawyer has served as the Chief Executive Officer of JABM since 2020. He created the company with one mission in mind–changing the status-quo for what it means to promote live events, entertainment, and curated experiences. Prior to his role at JABM, Jayson worked in Sales at several Silicon Valley tech companies, most recently LeanData Inc. Prior to LeanData, Jayson was at Adobe Inc. selling their Document Cloud business solutions to their Enterprise clients.