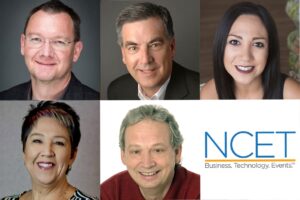 Bill Leonard has been elected to the board of directors of NCET, a member-supported non-profit that produces educational and networking events to help people explore businesses and technology.

Matt Fisher, Andrea Quiruz, Toni Quiruz and Chuck Sweeney have been re-elected to the NCET board.

Bill Leonard, elected NCET’s vice president of communications for Tech Wednesday, is a lead-generation specialist and owner of Copy Unlocked, a firm that develops business-to-business and business-to-consumer marketing campaigns.

Leonard is a graduate of the University of California, Los Angeles, and earned a master’s degree in business from The George L. Graziadio School of Business and Management at Pepperdine University.

Matt Fisher, re-elected as co-vice president of special projects, is a product visionary at Trakker Design Research, an industrial design studio in Reno, and also serves as a fully ordained Buddhist priest who teaches at Reno Buddhist Center.

From 30 years as a product designer he holds 19 patents. Fisher has created innovative and disruptive designs for consumer goods and industrial clients across the nation.  As a priest at Reno Buddhist Center, he teaches a world view based, like his design aesthetic, on simplicity and sustainability.

He earned a bachelor’s degree from Bowdoin College in comparative religion and a master’s degree from San Jose State University in industrial design.

In addition to her position at the PGA TOUR event, she is a freelance content writer.

She earned a bachelor’s degree in marketing from the University of Nevada, Reno.

Toni Quiruz, re-elected as vice president of membership, has worked 15 years in marketing and sales for Digiprint Corp. in Reno. She previously held positions in graphic design and pre-press operations at Sierra Packaging and Converting Corp.

Quiruz was recognized as Plum100 Magazines 1 0f 100 Influential People of Reno/Tahoe and additionally as Northern Nevada’s Professional Saleswoman of the Year.  During her time at Digiprint, the company has been recognized as Best in Printing by Reno News and Review nine years in a row along with Ambassador of the Year and Company of the Year for the Reno + Sparks Chamber of Commerce.  She currently also holds board positions with WIN and BNI International.

Chuck Sweeney, re-elected as co-vice president of special projects, serves as a business coach who helps leaders of organizations develop and implement a stronger vision for their companies.

He previously worked as a senior executive with 30 years of administration, marketing, and field operations management experience with the New York Life Insurance Co. His background includes responsibilities for international, national and regional marketing strategies as well as business development, sales, and special promotions.

“NCET is built on a solid foundation thanks to the successful business experience of leaders such as Bill, Matt, Andrea, Toni and Chuck,” said Dave Archer, president and CEO of the nonprofit. “We are grateful for their service.”

NCET, Northern Nevada’s largest educational and networking organization, is a member-supported nonprofit organization that produces educational and networking events to help people explore business and technology. NCET’s award-winning programs include the annual NCET Small Business Expo and NCET Tech Showcase and Awards, the monthly Biz Bite and Special Event luncheons, and the Tech Wednesday and Biz Café events.  NCET is funded by memberships, sponsorships and program revenues, and receives no state or Federal funding.  NCET is not affiliated with the State of Nevada or the University of Nevada.  For more information, visit www.NCET.org.