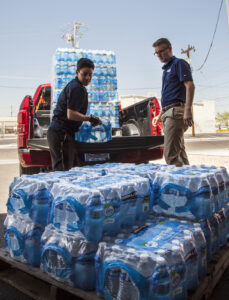 Ford and its philanthropic arm, Ford Motor Company Fund, are teaming up with Cowabunga Bay Water Park to launch the inaugural Fill an F-150 Bottled Water Drive in Las Vegas and help The Salvation Army provide vital hydration throughout the hot summer months.

From June 11-20, all four Vegas-area Ford dealerships are collecting cases of water to support The Salvation Army and its Emergency Disaster Services program, which provides hydration to those in need on days of excessive heat. According to the Southern Nevada Health District’s Office of Epidemiology and Disease Surveillance, an average of 99 heat-related deaths per year have occurred in Clark County over the last five years; 82 coming in 2020.

“The Salvation Army considers the scorching heat our natural disaster in the Southwest, and bottled water donations are vital to the effort,” said Captain Anthony Barnes, Clark County Coordinator of The Salvation Army Southern Nevada. “This water drive was launched by the Ford Fund in Phoenix nine years ago, and we’re excited to be able to expand it into the Las Vegas market for the first time.”

Cowabunga Bay Water Park will provide discounted admission coupons (good for up to $20 off Mon.-Thurs. admission or $10 off Fri.-Sun.) to each person who donates at least one case of water (standard 16.9 oz., 24 or more bottles) at any Vegas-area Ford dealership. The discounted daily admission coupon is redeemable during the 2021 season. Coupon quantities are limited.

“We’re eager to expand our partnership with The Salvation Army, which is very much in line with Ford’s mission to serve the communities where we do business and help those in need,” said Brad Jones, regional manager for Ford Motor Company. “We hope our Ford customers – and those new to Ford – will stop by a dealership with their water donation and, in turn, get a little fun out of their good deed with discounted admission to Cowabunga Bay Water Park.”

Those interested in donating a case of water in support of the Fill an F-150 Water Drive may drop off water at any of the following four Vegas-area Ford dealerships June 11 through June 20, 2021: