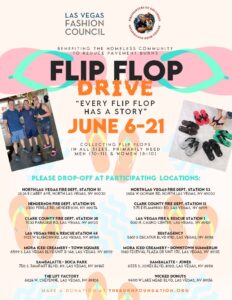 The Las Vegas Fashion Council and the Firefighters of Southern Nevada Burn Foundation will be collecting flip flops to benefit the homeless population from Sunday, June 6 to Monday, June 21 at participating drop-off locations, to help during this Vegas heat.
Both organizations are collecting flip flops in all sizes, but primarily need Men (10-11) & Women (8-10).
—–

For more information, visit the website at www.lasvegasfashioncouncil.com and stay up to date on upcoming events by following LVFC on Twitter @LVFC_NV , Instagram @LVFC_NV and facebook.com/LasVegasFashionCouncil.