You are here: Home / Features / Special Reports / Then & Now 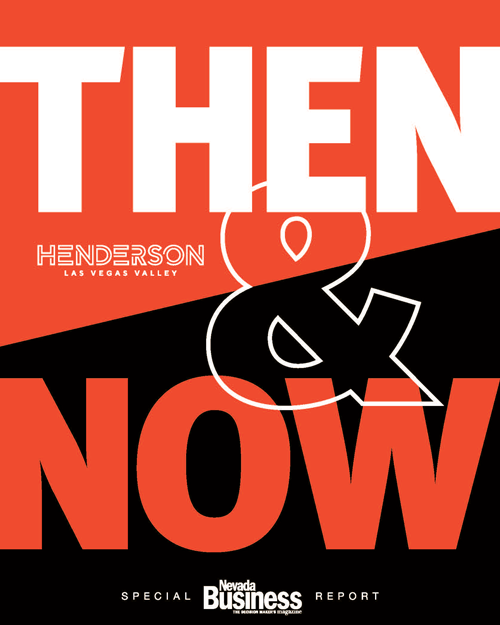 It’s the second largest city in the state, one of the safest cities in the nation and has some of the best schools in southern Nevada. Fifteen minutes from the McCarran International Airport, and 30 minutes from the California border, Henderson is a great place for people and businesses to call home.

Ten years ago, the City of Henderson was just coming out of the Great Recession. Economic recovery in Nevada took 128 months, so the peak of recovery hit in February 2020– just as COVID-19 shut down all non-essential businesses, said Anthony Molloy, AICP, redevelopment manager, City of Henderson. It’s been a rough dozen years for the city.

But through a recession and a pandemic, Henderson has diversified its economy, grown its industries and population and created a unique and vibrant downtown – the Water Street District. From its designated Opportunity Zone and its master planned communities, to the influx of new businesses and new jobs, Henderson is creating a unique, livable, walkable community with the economics, environment and enterprises to make it a great place to call home.

“We’ve grown from about 275,000 to 330,000 in population over the last 10 years. With that level of growth, we’ve had to continually adapt,” said Michael Tassi, director, community development and services, City of Henderson. “Over the last 10 years we have adopted our Henderson Strong comprehensive plan and that has set our goals for the next 15 to 20 years for how we are going to develop as a city.”

“About 10 years ago, we set out to build a more diverse, and thus more stable, economy,” said Henderson Mayor Debra March. “We have strategically targeted, and landed, a significant number of new businesses that provide better paying jobs to our residents.” New businesses locating in Henderson will find a growing available workforce.

“We are uniquely situated close to an international airport, near a major interstate arterial and next to one of the largest economies in the world,” said March. “Henderson also ranks high in quality-of-life indexes that businesses seek for their employees, being named a top city to raise children and one of the 50 best places to live in America.”

But it’s more than just a young workforce and great geographic location that marks Henderson as a city developers enjoy working with. There’s a “get to yes” environment within the Community Planning offices that streamlines the entitlements and permitting processes. Staff works with businesses and developers to find solutions to problems rather than creating roadblocks.

“Everything we do is centered on the needs of our businesses and residents,” said March. “Almost 20 years ago we reimagined our Business Development Services Center with a customer service focus. Our services are streamlined cross-departmentally so businesses don’t have to work through silos.”

The permitting inspection process in the Development Services Center is a quick, transparent entitlement process. Time is money for developers to get shovels in the ground, Tassi said; Henderson allows them to schedule around guaranteed review times. The department has a 98 percent success rate meeting those appointments.

Henderson’s Redevelopment Agency focuses on neighborhoods considered in distress, whether physically, socially or economically and through the creation of redevelopment areas, devotes additional resources to those areas in order to focus planning efforts that will encourage reinvestment and economic development.

But it’s not just new developments that get attention from the city. When a redevelopment area is created, a portion of the property taxes is set aside to provide resources in order to encourage reinvestment and provide resources for community residents.

“We have a residential improvement program available for residents in our redevelopment areas,” said Molloy. The fund helps cover costs of painting exteriors and improving landscaping, fences and walls in front yards.

As a result of efforts taken with housing development citywide, Henderson boasts the highest average household value in Nevada, roughly 30 percent higher as compared to the region as a whole.

Henderson is in transition from a place to live and learn but not necessarily work, to a community that has it all: colleges, job opportunities and housing.

“Henderson has always been a desirable place to live,” said Tassi. Community design creates multimodal streets that accommodate cars, pedestrians and bicycles. It’s a walkable city with a lot of parks. Community Development, Parks and Recreation and the Department of Utilities Services all work together to maintain Henderson’s high quality of life.

Henderson’s new housing developments include Cadence, a master-planned community that ranked tenth in the nation in 2020 with 849 sales, and Inspirada, ranked thirteenth in 2019 with 544 sales.

“There used to be a perception that Henderson was a bedroom community or suburban environment and that people had to go out into the county to work,” said Derek Armstrong, director, Economic Development and Tourism, City of Henderson. One of the biggest changes over the last decade is the focus on creating employment centers in the city.

Balancing jobs with houses so residents can work where they live might mean making decisions not to do things—like zoning land for residential use. “One particular piece of land that I’m thinking of is across from the executive airport where the Raiders Headquarters is now located,” said Tassi. “That was a residential development and we engaged with Lennar Homes to do a land exchange so we can preserve that for non-residential uses and create employment.”

Henderson appears to have fared better overall than some other Nevada cities throughout COVID-19. One reason for this could be because there’s a little more space and more single-family housing and a little less density than elsewhere in southern Nevada. But both infection rates and hospitalization rates were lower in Henderson than in other parts of southern Nevada.

Henderson’s also recovering faster economically. “Our businesses have been pretty resilient,” said Armstrong. “We’ve seen some of our businesses retool and repurpose themselves to help out, but whether they’re manufacturing or otherwise, the industries we’ve brought in over the last decade aren’t as severely impacted as the tourism and hospitality industry.”

Vaccine rollout is keeping southern Nevada hospitals from being overwhelmed and keeping vulnerable populations safer. With those two things in place, and the Nevada economy poised to open again, “I think we’ve made significant progress and now we’re starting to measure how much we’re improving in terms of our economy as opposed to how much our economy is declining,” said Jeremy Aguero, principal analyst, Applied Analysis.

Restaurants are reopening and casinos are moving back to 24/7. “In terms of the recovery cycle, I said early on I thought it was going to be about 18 to 36 months,” said Aguero. “We’re about in the middle of that right now, so we’re probably 12 to 18 months until we get back to something that approaches normal. I think we will get back there; it’s just going to take some time.”

“There’s been quite a bit happening in the city over the last 10 years,” said Armstrong. “It’s not just a place people can live, but where they can work and play, and there’s no better example than West Henderson.”

Kroger and Turano Nevada Baking Company opened distribution centers, and Haas Automation, “the world’s largest manufacturer of machines that build machines,” according to March, broke ground in November on its proposed 2.4-million-square-foot advanced manufacturing facility. Also under construction: Henderson West Hospital, a 40-acre campus which will house a new hospital and several medical office buildings. Google has located a data center off Boulder Highway and Warm Springs Road. The city hopes to create a tech corridor there, with other tech companies like Vadatech, a computer support company, coming in.

Of all the redevelopment areas and projects Henderson’s been involved in over the past decade, downtown redevelopment is considered the most important. Bringing Lifeguard Arena to Water Street was an Opportunity Zone project; the designation provides access to capital that doesn’t exist in other geographic areas.

Water Street didn’t draw a lot of foot traffic until 2000 when the Downtown Henderson Investment Strategy provided guidelines for bringing the street to life. The Redevelopment Agency brought together residents, business owners, city officials and community groups to determine what they wanted to see in a vibrant, healthy downtown.

“If a business is looking to come to Henderson or developers are looking at a redevelopment area specifically, we provide them with a concierge service,” said Molloy. Which means somebody on staff is assigned to work with them through the licensing process and zoning approval.” Team meetings bring together representatives from each department to get developer concerns out on the table and remove barriers and obstacles to going forward, facilitate the development and move it through the process as quickly as Possible.

Located in the Water Street redevelopment area, Lifeguard Arena is home to the Henderson Silver Knights. Having a professional American League hockey team in downtown generates interest and investment from new and existing businesses and brings residents to downtown for events the entire family can enjoy.

The city created a partnership with the team that’s changing the city in exciting ways. On weeknights Lifeguard Arena is full of kids learning to play hockey. A related project, the Henderson Events Center, is a planned, 6,000-seat indoor arena which will be owned by the city and managed by the Silver Knights. “The new, state-of-the-art entertainment venue will feature Silver Knights home games, the Henderson Symphony and other performing arts, and community events like graduations,” said March.

Henderson Silver Knights is the city’s first professional sports team, and Henderson is one of only 32 cities to be home to an NFL team. The Raiders Headquarters and Intermountain Performance Center, located in Henderson, has already brought in almost 400 new jobs, according to March.

The presence of professional sports teams is revitalizing downtown. Already a five-story mixed use project has gone up across the street from Lifeguard Arena, and the area is home to new businesses from Fratelli’s Pizza to Mojave Brewing Company to Biscuits and Bourbon on Water Street. “Restaurants, retail and other businesses that surround these major entertainment centers will benefit from increased traffic as visitors come out to sporting events,” said March. “And everyone benefits as our economy strengthens and grows.”

In addition, Hass Automation is expected to bring in 2,500 high skill jobs, and Safe Life Defense should bring in another 400. The recent sale of Boyd Gaming’s shuttered Eldorado Casino will return hundreds of jobs to Henderson, and Henderson Hospital West will create thousands of healthcare jobs.

Henderson continues to diversify its economy, and the economy of southern Nevada. Focused efforts to attract businesses in key target sectors has resulted in significant diversification over a short timeframe, and specifically targeted industries that bring in high-paying jobs. Targeted industries include: Advanced manufacturing and logistics; healthcare and life sciences; corporate headquarters and global finance; technology; hospitality and retail.