You are here: Home / Features / Building Nevada / Multi-Family in Nevada 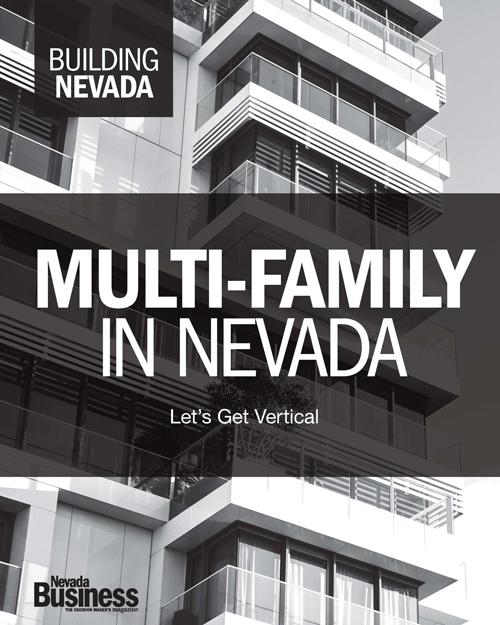 When the pandemic locked Nevada into quarantine in 2020, multi-family commercial real estate market professionals braced for bad news. With the state essentially at a standstill, the most likely scenario was the multi-family commercial real estate market would take a direct economic hit. Instead, the opposite happened. The pandemic accelerated the market nationally, and the same thing happened in Nevada. People left highly dense markets and engaged in social distancing by moving somewhere there was literally more space per person.

“They left New York, San Francisco and LA,” said Trevor Richardson, broker, Dickson Commercial Group. “Everybody wants to talk about it like it was an exodus but, it’s not like nobody lives there, it’s just that a lot of the density has left.”

While that meant rents are rising in Reno to levels previously unseen, multifamily users are getting more space, and amenities, for their buck. So, the number of people coming to Nevada continues to drive rent prices upward, and building sites are becoming scarce. In a nutshell, this market is not what commercial real estate professionals expected from the pandemic.

“We’re all gun shy about recessions in Reno, but I have data that shows Reno outperformed every market on the West Coast during the pandemic,” Richardson said. “We’re not over-saturated. Even if everything that’s under construction was built today, it’s still not enough multifamily to curb the market and to make it affordable.”

Home is Where the Heart is

In southern Nevada, residential building has taken a turn and headed into the city, rather than out of it as multi-family projects go up in the center of the city.

“What’s truly interesting is we’re seeing more assets being built in the core,” said Devin Lee, CCIM, Northcap Commercial. Northcap has a project in the Hughes Center and another being built in front of Symphony Park. “That’s new, where the core is getting built. I’m pretty exited about it, because I’ve been living here my whole life and we’ve always been building out.”

Projects are still being built pushing out from the core, but now they’re also being built at the heart of the city. Increased density is one of the key trends of multi-family construction in 2021. The days of the old 2-story garden walk-up apartment properties have passed. Density is the name of the game in metro areas, with 30 to 70 units per acre. Housing shortages in high population, high density cities are driving the need for larger projects with lots of amenities. Concierge services, resort settings and smart technology all combine to allow busy professionals to control their homes even when they’re not in them.

“The whole apartment game in Las Vegas is developing,” said Lee. “The last five to, almost, 10 years, people are building to a better spec, and also trying to find places to build where there’s walkability. That’s another relatively new concept [in this market].”

In northern Nevada, multi-family properties are building in south Reno and in Sparks, and they’re looking for infill sites. By far the largest infill project is RED Development’s Reno Experience district, a multi-use, multi-family project already renting out 1,500-square-foot, 2-story loft units with rents running $3,000 a month. That’s a shocking amount for Reno rents, but the units are leasing out and the locals have shown the most interest in leasing.

Other than that, Richardson said, northern Nevada doesn’t have enough units even under construction to curb demand, it hasn’t for the last six years and probably won’t in the next two. And there are boundaries to expansion.

Some of those barriers won’t change. Reno is in a small valley surrounded by 360 degrees of mountains. There’s nowhere to sprawl. Boise can build to the east for another hundred years, Phoenix is surrounded by flat developable land. Reno has mountains, so building apartments means building up, like the apartments at the Reno Experience district.

“It’s cut and dried and simple,” said Richardson. “We have four layers of converging facts: geography, population, overwhelming demand to live here because of our climate and a growing industrial and business community. Throw all those into a small market that can’t expand very much, and prices go through the roof, land values go through the roof. That’s what we’re experiencing.”

When people started leaving the bigger, more densely packed cities, they moved to secondary markets, often leaving a densely populated state like California for the nearest population center in the next state over. The result is booming rents in the secondary and tertiary cities, and rents dropping in once-denser cities.

Reno’s in the top 20 nationally in terms of single-family median home prices. What’s unusual is that Reno’s single-family home prices have remained high even as rents continue to climb. That makes Reno unique, because other markets with expensive single-family prices saw rents drop.

Richardson sees that distinction as a function of fundamentals: people, mountains and migration. People have been coming to Nevada from California for 150 years. They just have more reason to do so with California’s current politics and pandemic. Others come for pure migration purposes. They just want to be in Nevada.

Amenities, the Needs of Now

With the ability to work remotely, people are spending more time than ever in their homes, sometimes by choice and sometimes by necessity. Spending so much time at home means, for most people, home needs to offer more.

Today’s multi-family projects are expected to have a well decorated clubhouse and game rooms, likely equipped for billiards, foosball, and Xbox. Outdoor activities are a must, yoga studios are par for the course and higher end properties offer amenities more typical in condos: concierge services, resort-style pools and landscaping and restaurants.

Most of the properties being built are considered Class A. In fact, some are considered double Class A, or Class A+ – or just more. Tuscan Highlands is a 304-unit luxury property at St. Rose Parkway and the I-15. Located in the Southern Highlands master planned community, the property opened during the pandemic. There is a restaurant on property for residents that, with 12,000-square-feet of outdoor dining, means eating out while staying safe during COVID-19. Concierge services exist to handle the minutia of life.

Today’s multi-family units range from 500-squarefeet to more than 1,500. Some residents downsized to apartments; others are looking for all of those perks in a house-sized apartment.

Home offices have been trending for years, but the pandemic really put them to work. The ability to work from home is a benefit when businesses have to shut down to ensure the safety of employees and customers. But the ability to work from home also means people are home around the clock. That’s led to changes in the amenities renters want. Some of the perks they’re looking for include outdoor events as well as health clubs, salons and chiropractic services. Pet parks, resident lounges and co-working spaces are on wish lists and in developments, said Jonathan Fore, managing partner, Fore Property Group.

“Resident lounges are the community room from 20 years ago but now with a wine bar, a coffee machine, billiards and a foosball table,” said Fore. “An area where tenants who live there can gather within the building.” Fore Property Group is currently working on Jade Las Vegas luxury apartments on West Twain Avenue, and a 143-unit project near U.S. 95 and Durango.

Also high on resident’s wish lists is solitude. In addition to rooms set up for creating videos and podcasts, there are quiet rooms available where tenants can work. “For residents, if they’re not going into an office, they need to have a quiet area. If they don’t have it in their apartment, they need to have it in the building where there’s the ability to video conference, meet with other people and close the door and have a quiet space to work,” said Fore.

Technology made work from home possible. It also makes controlling home from work, or anywhere else, possible. Tenants are actively looking for units with technology that allows them to control the heat or the air conditioning before they get home. They want video doorbells so they can monitor anyone around their unit when they’re not home. And, when they are home, they want high speed internet both for virtual meetings and to stream television as they cut the cable cord.

In both northern and southern Nevada, rents reflect apartment amenities and square footage, with most double class A units going for $2.15 or more per square foot, and some units leasing at $3 a foot. The pandemic affected the market, which was expected. What wasn’t expected was the way in which it did so.

“We started tracking in April,” explained Lee. The brokerage team didn’t just track which tenants were going to pay rent and which weren’t, they also tracked volume. “We saw almost double the amount of traffic we had, and that came from southern California.”

In July and August 2020, Northcap Commercial saw 50 to 60 percent of new renters coming out of southern California, where previously it had been 30 percent. At Tuscan Highlands, more than 60 percent of residents are from out of state.

“Sixty-two percent of our people come from out of state,” said Bob Schulman, chairman, Schulman Properties, developer of Tuscan Highlands. “About 80 percent of those are from southern California and 10 percent from northern California.”

Because density of California cities like San Francisco and Los Angeles drove residents to find less-dense places to live, the surprise was that, instead of being hurt by the pandemic the way the market was hurt by the Great Recession, in Class A multi-family product, volume increased. A large part of the change has to do with so many more people working remotely. This means, today, a great many people living in Nevada don’t necessarily work in the state. Class A multifamily properties benefitted from people leaving high density cities like Seattle and San Francisco for Nevada metro areas. And while some of the new rents, such as $3,000 for a 1,500-square-foot apartment, seems high to Nevadans, in San Francisco they’d be paying twice that rent for half that space.

Another pleasant surprise for landlords and property owners in 2020 was that renters in Nevada paid their rent. On the high-end properties side, tenants seemed to believe it was simply what was expected and went on paying through the economic uncertainty accompanying the pandemic. For tenants in affordable housing properties and those who lost their jobs or were relying on unemployment, brokers and property owners found that federal programs providing rental assistance money actually worked. For the most part, rents got paid.

Overall, there weren’t as many evictions as anticipated at the beginning of the pandemic, even before the eviction moratorium went into effect. But, as the moratorium ends April 1, 2021, there’s expected to be an impact on multi-family properties.

Especially with so many Americans unemployed during the pandemic, there’s nationwide demand for affordable housing. Nevada is no exception. The problem is developers can’t afford to build affordable housing – it doesn’t add up financially, said Lee.

Fore Property Group owns and manages several low-income housing, tax credit properties throughout the Valley. “We have a strong waiting list at each property, and definitely the demand outweighs the supply,” said Fore.

In southern Nevada, Lee expects once the casinos are fully open there will be both a housing and a labor crunch. And, with rents going up relatively quickly, he believes there’s enough demand to support a high-rise construction project. In northern Nevada, density continues to be the watchword, as Reno’s largest infill project grows upward.