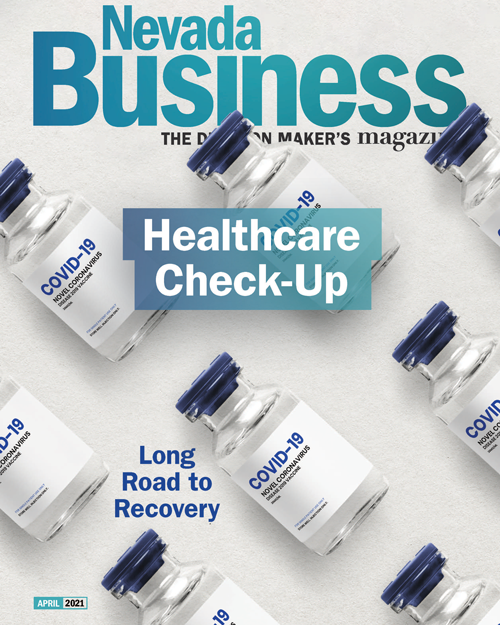 Nevada’s doctors and hospitals battled gallantly to beat down one of their biggest threats ever throughout the COVID-19 pandemic. Now, as the pandemic begins to wane, the healthcare industry faces a major new headache: Digging itself out of the financial woes left in the wake of the battle against COVID-19.

Administrators of big acute-care hospitals — the ones on the frontlines of Nevada’s pandemic battle — expect their institutions will need half a decade to regain the financial ground they lost in the past 12 months. Many physicians, too, took a substantial hit as patients stayed home, delayed routine care and put off elective medical procedures.

And to add another twist on things, no one is entirely certain how healthcare will be delivered in the future after the pandemic forced rapid, widespread adoption of telemedicine. Those technologies aren’t going away. They are likely to have big effects on how physicians and hospitals treat patients, and that’s going to bring a new set of questions about the facilities and services the healthcare system will need in the future.

For the moment, leaders of the healthcare industry are focused on short- and medium-term financial issues. University Medical Center of Southern Nevada (UMC), for instance, now finds itself in a pandemic-related financial hole that’s nearly a quarter of a billion — that’s with a “b” — dollars deep.

Mason VanHouweling, chief executive officer of the hospital, said the pandemic dramatically squeezed UMC’s revenue at the same time that its costs rose rapidly. On the revenue side, early on in the pandemic the hospital cancelled elective procedures, such as knee replacement surgeries, and encouraged residents to stay home rather than visit clinics or other facilities.

“We experienced a 40 to 50 percent drop in patient volume,” said VanHouweling.

Clark County, facing budget woes of its own, was forced to cut its subsidy to the medical system, but federal pandemic-relief funds covered part of that shortfall. In all, pandemic-related problems reduced revenues by about $77 million at the hospital, which had been posting solid financial results for at least six years after a rocky stretch in the years following the Great Recession.

At the same time that revenues tanked, costs skyrocketed. Labor costs spiked as UMC contracted with more nurses from around the country. Purchases of personal-protective equipment soared, as did purchases of supplies, such as oxygen. As one example, the hospital boosted its purchases of oxygen by ten-fold from normal levels during the worst days of the pandemic.

In northern Nevada, the combination of higher costs and lower revenue brought an operating loss for Carson Tahoe Health during 2020, said Alan Garrett, president and chief executive officer of the nonprofit. He said its flagship hospital moved quickly to stop all but emergency surgeries as the pandemic began to tighten its grip on northern Nevada last spring.

As a result, Carson Tahoe’s surgical volume was down by nearly 25 percent during 2020 compared with year-earlier numbers. Urgent-care and emergency-room revenues also posted significant declines. And its costs, too, rose dramatically.

At Carson Tahoe Health, labor costs rose by about $10 million. The organization boosted pay for front-line workers and spent heavily to bring nurses and respiratory therapists from elsewhere in the country to relieve exhausted staff members — especially around the holidays.

Costs of some personal-protective items and routine medical supplies doubled or tripled as the result of shortages and supply-chain issues, Garrett said. The hospital bought more ventilators, robots to handle some cleaning chores, and added technology to improve the safety of communication with patients. And it spent heavily to renovate facilities to prepare for surges of COVID patients.

The hardest-hit specialties were those that depend on elective procedures — plastic surgery, orthopedics, cardiology, dermatology and ophthalmology. Medscape said 9 percent of independent medical practices closed, at least for a while during the pandemic.

On a positive note, Wall Street’s boom last year helped Carson Tahoe Health’s investment portfolio — those assets accumulated in better times — to cover some of the losses from its operations. “We are a conservative investor, but the strong stock market did provide some relief,” said Garrett. “Special federal funding was appreciated but not nearly enough to make up for the losses.”

Full financial recovery is likely to be a slow process. “I am hopeful that within five years the financial impact of the pandemic can be recovered from sustained, improved performance,” Garrett said.

The Carson City hospital returned to normal schedules in February, but still faces higher costs for personal protective equipment. Staffing remains high to screen visitors and take other cautions associated with COVID-19. On the revenue side, emergency room volumes were just beginning to return to normal early this spring, Garrett said.

UMC brought its losses to an end in December, partly because revenues from COVID testing helped cover continued declines in emergency room cases and hospital admissions. January saw a small step out of the red and into the black. Hospital officials feel positive about the recovery of the Las Vegas economy through the rest of this year and expect recovery of the overall economy will buoy the hospital’s finances.

“We’re trying to recover the business we lost,” added VanHouweling. “Really, it’s like starting over again.”

Important as the financial issues are, healthcare executives are concerned about the wellbeing of workers who have come through these exceptionally difficult times.

“We consider the people of UMC to be the true heroes through all of this,” VanHouweling said. “They’ve been here every step of the way,” he added.

One of the most important steps taken by the UMC leadership team throughout the crisis: Staying in close contact with front-line medical professionals, listening to their needs and providing the assistance they needed, whether it was medical supplies or a counselor from behavioral health.

VanHouweling credits, too, the support of the community for the hospital’s staff during the darkest days of the pandemic. Hand-written cards made a difference, so did meals sent over by restaurant operators. “We really appreciate our community’s support for UMC,” he said.

When the pandemic’s arrival upset retail supply chains, Carson Tahoe Health partnered with local retailers to provide diapers, shelf-stable foods, and other high-demand items for free to staff members who needed them. Counseling was also available. Stress-reduction events such as Zoom yoga and trivia contest provided respites. Painted rocks from kids in the community and a fly-by from Air Guard jets brought moments of joy.

“We’ve tried to be encouraging and supportive of our staff, as we all can empathize with one another,” Garrett said.

Penny-pinching will be the norm. “With the 2020 financial loss, we will need to be extra thoughtful about where we spend our dollars in the next few years,” Garrett said. “The imperative to make healthcare more affordable just became an even higher call.”

On the revenue side, the future of Medicaid payments is one of the biggest issues for doctors and hospitals alike. When the scope of the state’s budget crisis became apparent last summer, the Nevada Legislature required that the Nevada Department of Health and Human Services cut payments to Medicaid providers by 6 percent — a total of about $53 million. That’s no small potatoes for medical professionals.

Medicaid, the primary public health insurance program for low-income people, serves about 810,000 people in Nevada — nearly 26 percent of the state’s population. That means the 6 percent reduction in reimbursement rates brought pain across the medical spectrum, from hospitals to individual physicians. And while available funding declined, demand for Medicaid services rose.

Richard Whitley, director of the Nevada Department of Health and Human Services, notes that the number of Medicaid recipients in the state has hit a new record every month since April — an increase of 20 percent in 10 months. Whitley said demand increased, too, for mental health services and programs such as the state-operated Supplemental Nutrition Assistance Program that helps families meet nutritional needs.

The pandemic also triggered some surprising cuts. The number of marriages in the state declined in the pandemic. Domestic-violence services are funded through money collected as part of the marriage license fee. Hence, less money was available for professionals who provide domestic-violence prevention.

Along with the future of Medicaid payments, another set of big questions is raised by the widespread adoption of telemedicine. Its use exploded as patients and medical providers looked for ways to reduce in-person contact, and regulators removed some of the barriers to its use.

“As an industry we struggled with telehealth for years, but the pandemic cued us to make it pervasive in days,” Garrett said. “We have traditionally focused on a model of you coming to our home for care and now we see the possibility of us going to your home for care.”

The increase in use of telehealth is especially remarkable in rural areas, said Whitley. From 2019 to 2020, Medicaid claims for telehealth services in outlying areas of Nevada increased by 260 percent, and he expects that trend to remain in place.

The effects of telehealth’s adoption could be widespread. Some issues are mundane. For example, will smaller waiting rooms in clinics become the norm? However, others are far more significant. Some doctors see a day, for instance, when telehealth serves as a screening tool for emergency room visits. That means only the most seriously ill patients would be seen by emergency-room physicians, while the remainder are treated virtually and receive follow-up visits at home. In turn, reduced emergency-room caseloads would have a noticeable effect on hospital finances.

For all the success stories and individual acts of heroism by medical professionals, the pandemic threw a strong light on weaknesses of the national’s healthcare system. Garrett believes hospitals and other health providers will be asking themselves hard questions in coming years.

Some of the hardest questions will focus on the very fundamentals of the healthcare industry. Garrett said Nevadans needn’t look very far to see the sorts of issues that will be addressed.

“California built a healthcare system that created efficiency by reducing available beds,” he said. “That essentially failed with the pressure of the pandemic.”

The pandemic also spotlighted inequities in the healthcare system as COVID-19 put many members of racial and ethnic minority at greater risks of serious illness or death. “I am hopeful that non-profit healthcare in America will make addressing these disparities a priority,” Garrett said.

Already, executives say they see signs that the stresses of the pandemic began to create a stronger healthcare system in Nevada. Whitley, for instance, said state health teams strengthened their partnerships with agencies across Nevada. Garrett came away with an even-greater appreciation for medical professionals.

“It was humbling to work alongside so many caregivers who cared for others tirelessly, regardless of their own fears, challenges, and trying circumstances. The Carson Tahoe family showed up every single day,” he said. “The pandemic served as a refining fire.”

And even as health executives work through the financial headaches brought by the pandemic, VanHouweling said dollars never were the issue as thousands of Nevadans fought for their lives and hundreds died from COVID-19.

“Our mission,” he said, “is to take care of the health of the individuals who live in our community.”