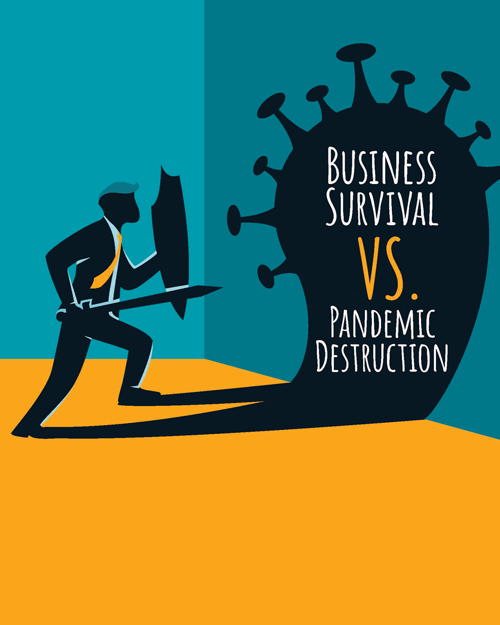 For Nevada businesses struggling to survive during the coronavirus pandemic, bankruptcy may end up being the only way out. While overall filings nationally were up 20 percent last year, according to bankruptcy court records, the number of businesses in the state that filed Chapter 11 bankruptcy, which involves reorganizing and remaining in operation, have remained relatively stable. And according to some experts, it either won’t be too long before more firms seek relief or will come out the other end of the pandemic in a position to pick up where they left off before the crisis devastated the Nevada economy last year.

“In 2020 there was one less filing than in 2019,” Fell said. “So we didn’t see an uptick in filings in 2020. For 2021, we only have stats through January. [There’s a] total of eight cases which was three more than last year and 10 less than the prior year. From the standpoint of the state of Nevada we are not seeing a real trend yet.”

Federal small business loan programs and rent relief may be delaying the inevitable. “It waits to be seen how that shakes about,” Fell said. “Now that we are getting into a recovery that may not be a problem. We don’t know.”

Fell said, in Las Vegas, there were businesses that were tied to the convention or tourism industries that all but disappeared in 2020. For example, he had a client in the convention industry and when the coronavirus pandemic canceled their business, they simply closed their doors, locked up and moved on.

Ryan Works, chair of the bankruptcy, insolvency and financial restructuring group with McDonald Carano said a lot of small companies are simply, “throwing the keys back to the landlord and saying, ‘Come get it. We can’t make it; we can’t restructure.’”

Fell added that those situations are not going to show up in the bankruptcy statistics. “There is no reason for them to file bankruptcy,” Fell said. “There was nothing to liquidate, nothing to reorganize. It was just the business was gone.”

In Las Vegas and Reno, there were also a number of restaurants that have closed because they can’t operate take out or at 25 percent capacity. They’ve closed and will never return, even as Nevada begins to loosen capacity restrictions put in place to prevent further outbreaks.

Despite financial stimulus, small business loans, unemployment compensation and payment deferrals, there are many businesses still struggling in Nevada.

“The numbers for bankruptcy filings remain pretty consistent for the last two years and that trend appears to be continuing into 2021 as well,” said Blakeley Griffith, a partner with Snell & Wilmer.

Cecillia Lee, a bankruptcy attorney with Lee High Ltd. in Reno, agreed that bankruptcy filings have remained pretty consistent, but cautioned that could change as the state continues to recover from its pandemic-related recession. In general, Lee said, what she and her colleagues have seen in the last year, is a decrease in bankruptcy filings in both personal and Chapter 11 filings, but many experts have attributed that decrease to the CARES Act and the moratorium on evictions.

“When the pandemic first hit, bankruptcy attorneys were bracing themselves for a repeat of 2009 but that didn’t happen in Nevada,” Lee said, “It’s now simply a matter of when bankruptcy filings will begin to increase.”

Overall, Lee said she believes that the various state and federal programs to address some of the issues businesses have had to deal with over the past year have, “just kicked the can down the road.”

“The economy is in recession,” Lee said. “We’ve not felt the depths of it yet because of programs such as the moratorium against evictions. That really creates a pent up situation that is probably going to be felt as the economy opens up more and more.”

Works said Nevada lags behind New York and Delaware where a lot of the national restructurings happen. He attributed that to the size of the state’s economy and a lot of smaller companies that are located here.

The coronavirus pandemic has impacted Nevada bankruptcy courthouse operations, leading to judges implementing procedures and adopting protocols due to the virus, including online hearings, postponing proceedings, courthouse restrictions and, in some cases, closing courts.

Fell said federal bankruptcy courts have been operating at full capacity for the last year with nothing really changing except everything going remote.

“We are not having any in person hearings presently, since this all started,” Fell said. “The court, from the outset, did everything telephonically which was not that foreign to the bankruptcy court. There were always telephonic appearances because a lot of major cases have out of state counsel.”

For contested matters, things that require evidence or trials, Fell said they’ve been using Zoom. “It was effective,” Fell said. “From a technology standpoint the bankruptcy courts have really stepped up to the plate and their operations have really not been affected.”

The state court has been totally different, Fell added. “In state court everything got bumped. Now with the slow reopening, they are starting to schedule in person trials and hearings,” he explained. Fell added that he was not aware of any in-person appearances in state bankruptcy court as of yet, leaving any hearings to be conducted virtually.

As of late March, Lee said there have been no in-person bankruptcy trials in Washoe County. “Everything has been done over the phone or by video, which is not optimal,” she said. “It’s not the same as conducting a hearing and testifying in person.”

Bankruptcy filings have still been happening during COVID, and the bankruptcy courts here in Nevada have been running very smoothly, added Griffith. “However, it is likely there will be more bankruptcy filings in the future, for both businesses and individuals, as COVID winds down,” Griffith said. “Lenders have delayed foreclosure proceedings on both commercial and individual loans, but this delay will likely end after the pandemic ends.”

As Nevada’s economy begins to open up, some attorneys expect pent-up demand for business bankruptcies because of the financial hardships from the pandemic.

Others are more conservative in their expectations. “You’ll find a lot of folks in this industry [nationally] who believe a wave of bankruptcies are coming,” Fell said. “From the national perspective that may very well be true. I think national retailers, national restaurant chains are the ones that have struggled the most.”

Many of those filings were before COVID because some of those retailers were already in trouble. “COVID may just push some of them over the edge. On a national basis we may see some major filings but, again, not directly tied to Nevada or Nevada employment or economic activity.”

When asked if those national brands closing locations in Nevada would have an impact locally, Fell said they would as well as for landlords who had rented the space. “No question the national brands have economic impact, but it is not significant like a major Nevada entity, like a casino or major manufacturing plant in the state that actually gets hammered.”

Nevertheless, Fell didn’t necessarily expect to see a wave of bankruptcies in Nevada. “If a business has survived this long, I think there is a good chance [it will continue to survive] as the state begins its reopening,” he said. When you talk about business bankruptcy Fell added, “it doesn’t make a lot of sense if a business is failing to go into a restructuring unless there is some light at the end of the tunnel. They can say, ‘Revenues are down right now, we need some breathing room, but in six months here are our projections, as the state reopens. Here is the business we will be doing,’ [In that instance,] a restructuring might make sense. But again I haven’t seen a lot of activity in that regard yet.”

As Nevada’s economy is starting to reopen, there might not be a real wave of business bankruptcies here. However, “personal bankruptcies are something I always thought could really explode because there was so much unemployment,” Fell added. “While stimulus and unemployment checks were being handed out there is only so much you can do and there are only so many jobs coming back.”

Griffith, on the other hand, expects an increase in the demand for business filings post-pandemic. “It’s likely that businesses have been able to avoid bankruptcy thus far because of funding from the government and working with their creditors during the pandemic,” she said. “However, once the pandemic ends, it will be important to see if businesses are able to return to ‘normal’ or if they will need to restructure or wind down in a bankruptcy proceeding.”

Before any business files Chapter 11 reorganization, Griffith said they may want to consider working with any lenders and creditors outside of bankruptcy to restructure and work out their debts.

Lee agreed, saying they’re a lot of options out there for businesses that may need to close their doors but a, “lot of this is dictated by the [state of the] economy.” She said her advice is that if businesses owners find themselves considering bankruptcy, reach out to an attorney. “Don’t wait,” Lee said. “And don’t use your IRA to fund your struggling business for three or four months only to find out you can’t survive. Get help from a professional and make a game plan.”

Fell added that businesses really need to make those plans sooner rather than later. “You don’t want to do it after you run out of cash,” he explained. “You want to do it when you still have cash, so you can explore all your options. That’s key early intervention.”

Lee added that she’s seen a number of business owners cash out their IRA’s to try and help their businesses survive only to be faced with a hefty tax bill that they may not be able to afford. A typical Chapter 7 liquidation can cost between $5,000 to $10,000 in Nevada, while a full-blown reorganization of a business through a Chapter 11 proceeding can cost hundreds of thousands of dollars or even millions of dollars depending on the size and scope of the company.

“Let’s be clear, bankruptcy is an expensive and inefficient way to do business and it’s really a remedy of last resort,” Fell said. “I don’t tell a business to go into a restructuring until they have exhausted all their other options because of the inefficiencies and cost of it.”

He concurred that the first thing people should consider when they are struggling is opening lines of communication with lenders, landlords and vendors. Negotiating concessions that everyone can live with is key. “But, when all else fails, if the business doesn’t have any real plan or way to project into the future as far as its revenues, cost structure and whether or not it can recover, options include selling if there is a willing business out there,” Fell said.

Fell had a client that recently sold off its inventory and equipment to at least allow employees to move into a new company and save jobs, even though there was no money for the owners. If bankruptcy is a business’ only alternative, the filing doesn’t have to happen right away.

“Let’s say an owner goes into foreclosure,” Fell said. “The foreclosure process in Nevada takes 120 days, So you don’t need to file bankruptcy on day one, you can file on day 119. The key is to be proactive and engaged on day one so that you are talking to the right professionals and you are opening those lines of communication to your vendors and lenders.”