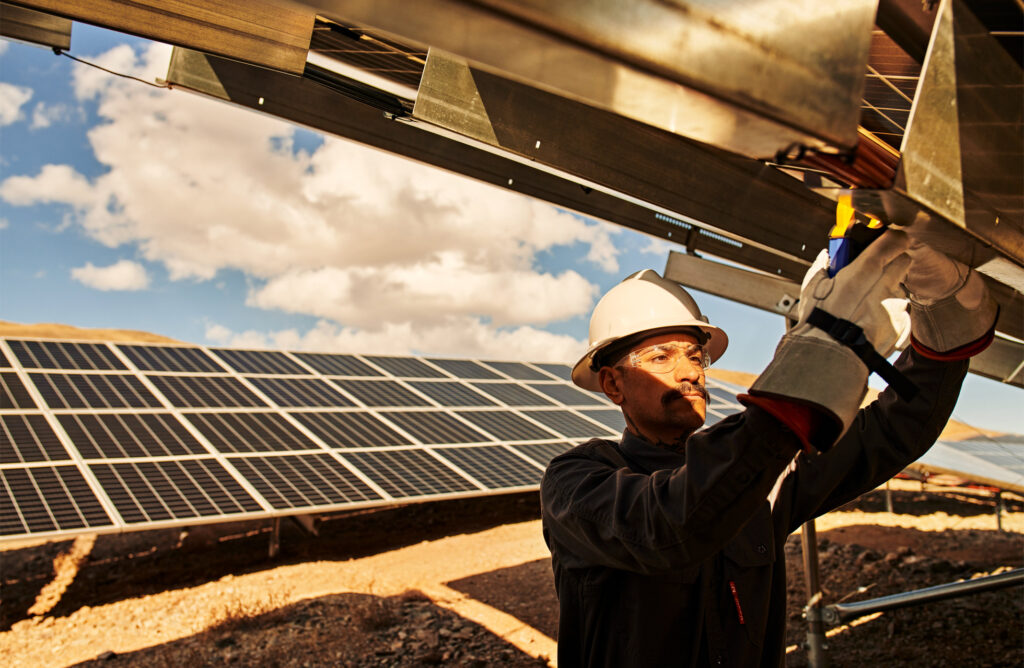 Within the Park, the Turquoise Solar Project is owned by Greenbacker Renewable Energy Company (“GREC”), a utility-scale renewable energy development company. Upon completion, the project became the largest operating solar project in GREC’s portfolio. The project was also recently awarded “Utility-Scale Project of the Year” in Solar Builder’s 2020 Project of the Year awards.

“Turquoise is the largest single operating solar project in the Greenbacker Renewable Energy Company portfolio to date, with many more great projects soon joining it from our construction pipeline. Moreover, it is very highly regarded in the solar power industry,” said Charles Wheeler, CEO of GREC. “Completing it has been a huge accomplishment and is the product of a tremendous collaborative effort between the parties involved. We’re incredibly proud to have been part of it all. Despite an extremely challenging year across the country, 2020 was a year of growth for us, as we continued to bring amazing new wind and solar projects like this one online. During the year, our total investment income increased by 60% reflecting the strong growth we’ve achieved thanks to projects like Turquoise.”

The project reached commercial operation on December 4, 2020 and has outperformed expected power generation to date, despite lower-than-expected levels of sunshine. This strong performance has benefited from the service provider’s ability to keep the inverters at near-100% availability to generate clean power for Apple’s data center. Cypress Creek Renewables provides operations and maintenance for the project.

Apple is proud that for nearly three years we’ve powered all of our worldwide operations with 100 percent renewable energy,” said Lisa Jackson, Apple’s Vice President of Environment, Policy and Social Initiatives. “In the process, we’ve charted a course for other companies and organizations to bring clean energy projects to communities around the world and help combat climate change. We’re excited to have the Turquoise Solar Project bringing new renewable energy to Nevada.”

The project, originally developed by Estuary Capital Partners and Sumitomo Corporation of Americas, was acquired by GREC in 2019. “Estuary first envisioned the Turquoise Solar project back in 2013,” said Jill Daniel, president of Estuary. “Previously, the site had been intended for natural gas-fired power generation. Estuary considered the site better suited to solar, especially given Apple’s industry-leading commitment to the environment. The project benefited greatly from the support of NV Energy and our partners in Washoe County, who helped it overcome many challenges, and we’re proud of our contribution to making it a reality.”

Construction of the project began in November 2019 and created 236 clean energy craft worker construction jobs, over 90% of which were filled by Nevada residents. It also represented a more than $60 million investment in Washoe County.

Much of the Turquoise Solar Project is located on rocky desert terrain with slopes ranging from 10% – 30%, which presented a unique engineering challenge. McCarthy, which served as the engineering, procurement, and construction (EPC) contractor on the project, partnered with TerraSmart to design and engineer a plan for the site. The approach had the support of in-house and external consultants and hinged on TerraSmart’s fixed-tilt racking system, which utilizes ground screw foundations. The system proved more than up to the terrain and was able to handle drilling into the site’s rocks, hills, and arduous soils. Through the collaboration, McCarthy and TerraSmart saved time and costs by minimizing clearing and civil work on the project, which also involved the installation and wiring of 156,000 bifacial 390W ET Solar modules.

“Thanks to the collaborative partnership with TerraSmart, this was another project where our team could design and engineer a solution for a solar project that had very unique terrain challenges,” said Scott Canada, senior vice president of McCarthy’s Renewable Energy Group. “We are also grateful to the exceptional local craft workforce for their ability to work safely and efficiently during these challenging times. Their efforts ensured the commission of the Turquoise Solar Project, allowing for the generation of clean energy to power Apple’s data center.”

Over the past decade, McCarthy’s Renewable Energy & Storage group has completed, or is in the process of completing, construction on more than 50 utility-scale clean energy projects in communities across the country. These projects deliver a combined capacity of more than 4.2 GW of clean power production and 320 MW of energy storage to the communities they serve.

“TerraSmart was pleased to partner with McCarthy on the Turquoise Solar Project and provide our turnkey ground mount-racking solution to help build a key utility-scale solar project at the Reno Technology Park,” says TerraSmart CEO Ryan Reid. “Initially, Turquoise presented many challenges to installers who said the land conditions couldn’t be penetrated. However, the site’s topography and subsurface conditions were nothing new to TerraSmart. Known to forge into the toughest of soil conditions, TerraSmart’s refined engineered products, agile machinery, and adjustable racking solution enabled a successful install on the mountainous Nevada base’s basalt cobbles, boulders and bedrock. Our proprietary tech has been standing up to extreme winds, freezing ground conditions and tenuous terrains for over a decade.”

Greenbacker Renewable Energy Company LLC is a publicly reporting, non-traded limited liability company that acquires and manages income-generating renewable energy and energy efficiency projects, and other energy-related businesses. The projects in which we invest, such as solar and wind facilities, sell power under long-term contracts to high credit worthy counterparties such as utilities, municipalities, and corporations. For more information, please visit www.greenbackercapital.com

McCarthy Building Companies, Inc. is the oldest privately held national construction company in the country, with more than 150 years spent collaborating with partners to solve complex building challenges on behalf of its clients. With an unrelenting focus on safety and a comprehensive quality program that span all phases of every project, McCarthy utilizes industry-leading design phase and construction techniques combined with value-add technology to maximize outcomes. Repeatedly honored as a Best Place to Work and Healthiest Employer, McCarthy is ranked the 12th largest domestic builder (Engineering News-Record, May 2019). With approximately 3,700 salaried employees and craft professionals, the firm has offices in St. Louis; Atlanta; Collinsville, Ill.; Kansas City, Kan.; Omaha, Neb.; Phoenix; Las Vegas; Denver; Dallas, Houston; and San Diego, Newport Beach, San Francisco, San Jose and Sacramento, Calif. McCarthy is 100 percent employee owned. More information about the company is available online at www.mccarthy.com or by following the company on Facebook, Twitter, LinkedIn and Instagram.