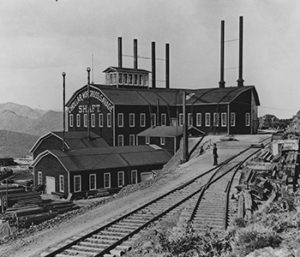 Savage and Son, Inc. marked their 125th anniversary of business this year. Established in 1893, Savage and Son is a family-owned and operated business that serves Northern Nevada and the Sierra as a provider of plumbing, HVAC and piping. The company holds Nevada Contractor’s License number 10 and is Nevada’s oldest contractor having passed the family business down through four generations. Over the past century and more, Savage and Son has completed several iconic projects in the Northern Nevada region, helping shape the area.

The family business traces its roots back to the early mining days in Virginia City, NV in 1859, where Leonard Coates Savage was highly involved with piping water out of the silver mines. Leonard helped discover the famous Savage mine but was unable to afford the development of the mine and found himself in a gambling hall where he dealt his claim to some Bay Area bankers in exchange for seven acres on Peavine Mountain and a white horse named Shakespeare.

It turns out the claim Leonard dealt became one of the most lucrative claims on the Comstock. While this didn’t turn the family into millionaires, it did start them on a path that has resulted in longevity. A few years later, Leonard Coates Savage’s son, Frank Charles Savage, co-established Genesy & Savage Plumbers and Tinners in Virginia City in 1880. In 1893, Frank opened his own plumbing business in Reno and named it Savage and Son, where they repaired everything from steam boilers to walk-in refrigerators on ranches.

Savage and Son was the original plumbing and heating contractor for many historical buildings in Northern Nevada including, Stewart Indian School, Lake Mansion, Governor’s Mansion, Saint Mary’s Hospital, Central (Reno) High School and Washoe County Hospital. In 1905, Savage and Son installed a heating plant at the Washoe County Hospital (now Renown) for $100, and over 100 years later they worked on the new Renown Tahoe Tower.

Earlier this year, Savage and Son performed a retrofit on the University of Nevada, Reno’s Lincoln Hall, where they discovered the original water closet under the stairs that was installed by their ancestors who were the original contractor for the building in 1896.

Success by Longevity and Innovation

To maintain a successful business for 125 years, innovation and adaptation to the changing times is crucial. Savage and Son can attribute its longevity as a business from constantly innovating and evaluating their performance and product and ability to meet the needs of their customers. In 2005, they built a 10,000 square-foot fabrication shop to improve operational efficiency, from cost to installation and implementation.

The Savage family credits their success to their dedicated staff, the previous generations who laid the foundation for a solid business and their strong family guiding principles of hard work, resourcefulness, integrity, selflessness and grit.