You are here: Home / Features / Feature Story / The Business of Credit Unions: The “Own-Your-Own” Financing Institution 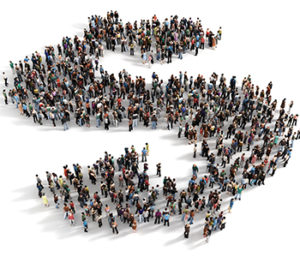 Credit unions offer a full suite of products for consumer and business customers, may work in construction lending and offer services from commercial loans to bill pay and payroll services. The differences between credit unions and banks represent choice for business owners deciding on a financial institution.

The biggest difference between credit unions and banks is structure. Traditional banks are for-profit entities whose shareholders are investors who have bought shares. Banks typically can raise capital through the capital market.

Credit unions, which originated in Europe in the mid-1800s, are member-owned non-profit organizations. Every member is a shareholder, and every dollar deposited is a share.

“A credit union is a not-for-profit organization that is controlled by its members, and has a board of directors that are not paid but are elected by credit union membership,” said John Lund, Nevada CEO, America First Credit Union (AFCU). “Credit unions only exist to serve and help their individual members, whether they’re consumer members or business members.”

One of the other major differences between credit unions and banks is the way they are taxed. As non-profits, credit unions are not requred to pay any federal corporate income taxes. Banks, on the other hand, are currently subjected to a 21 percent federal tax. That percentage was reduced from 38 percent as a result of the Trump administration’s tax reduction plan.

The first question a business owner should ask before deciding to work with a credit union is whether or not the business qualifies for membership, Burns said.

“Because one way credit unions are different from banks is that they have what’s called a field of membership, that basically defines the association of the credit union,” said Burns. Because the institutions are non-profit cooperative organizations by law, membership plays a role. Generally, membership requirements are geographic or professional. Silver State Schools Credit Union requires members to be employees, students or volunteers with Nevada schools. Clark County Credit Union has geographic membership requirements.

Another good question for business owners would revolve around how credit unions are insured, either federally or privately. While both protect deposits to $250,000, if it’s a concern, business owners should investigate, said Burns.

Third, can the credit union meet the business’ banking needs? Because while they can do a lot of what banks can do, they can’t do everything banks can do, whether because of regulations against working with a startup business or not handling construction loans, or because of limitations placed on the amount of commercial loans credit unions can make.

“We want to make sure we offer relevant products and services for businesses. Speaking for America First, we work hard to understand that many of these business owners put life and soul into making their business the best it can be, and we want to help them and partner with them,” said Lund. AFCU’s focus is on smaller businesses; they don’t get involved in giant commercial activity.

Those credit unions that are geographic in nature may not offer the same accessibility as other financial institutions. They may not operate statewide or have branches in every community, though most network with each other.

“Credit unions are very member-oriented, so a lot of credit unions will accept deposits for other credit unions and allow people to use their ATM to have the same kind of accessibility you can get with a retail bank,” said Burns.

ASI is a privately held company that insures shares in some state chartered credit unions and was established in 1974 as National Guaranty Insurance Fund. It insures to the same level as the National Credit Union Administration (NCUA), which is a federal organization, the sister agency of banking’s FDIC.

One of the biggest benefits of working with a credit union is that they’re community based, locally owned and operated.

“Generally we have people who have 25 or more years of experience looking at commercial loans,” said Jim Hunting, president and CEO, Sierra Pacific Federal Credit Union. “The difference is we have very few fees and don’t charge points. We go out of our way to have very competitive rates and probably most important, we establish a relationship with people wrapped around their actual business needs. And we’re fast. We make all of our decisions here and I personally am involved in all decisions. We do our due diligence and sit down and decide very quickly, which is what most businesses need.”

“We offer longer terms, and generally lower rates, and less fees, which obviously is kind of an up front cost for business owners,” said Nina Hallock, commercial loan officer, Great Basin Federal Credit Union (GBFCU). “One of the benefits of our credit union is that we’re looking to grow our membership in the community. So when local businesses come to us, we know that we’re helping them, and they’re helping us. By keeping our fees lower and our rates lower, that saves them money, and by offering a little bit longer terms, that helps them keep the cash flow, so they can focus on growing.”

“Our motivation is our members and to deliver great value to them,” said Kershaw. One way to do that is to share success, so Clark County Credit Union uses bonus dividends. “In January 2018 we gave to our members a bonus dividend of about $3.35 million and gave that back in ways and levels that our members do business with us, so whether it’s a deposit or a loan, we delivered that value back and that’s one of the ways we like to signify the value of that relationship.”

“Though they’re similar to banks, they’re member-owned, so the profits and losses are shared amongst all their members, which means everybody that deposits into it shares the profits, usually through lower interest rates, lower fees, usually a little higher interest earnings on interest earning accounts, and because they’re member-owned, everybody in the credit union is a shareholder,” Burns said.

That benefit can actually create exposure. “When a bank fails, the shareholders get wiped out but the depositors are protected,” said Burns. “In a credit union, the depositors are the shareholders, so everything above the $250,000 they get wiped out on, that’s what usually happens. We’ve prevented any of that happening in the financial crisis,” he added, but it’s something to be aware of.

That said, NCUA is a federal organization and, like FDIC, backed by the full faith and credit of the U.S. government. Private company ASI insures to the same level. Regulatory and financial ratings for 2018 show Nevada credit unions are very comparable to Nevada’s community banks.

“They’re all operating in a safe and sound, satisfactory condition, and they are subject to similar evaluations as banks,” said Burns.

There are similar limits on lines of credit, which are generally geared toward community businesses. “We wouldn’t be able to do a line of credit for a huge company,” said Hunting. “It’s limited to $100,000, if it’s an unsecured line of credit. If it’s secured, we can do all sorts of things, but that’s a limitation a large bank wouldn’t have.”

Which doesn’t mean credit unions don’t offer lines of credit or commercial business loans (usually called member loans). Credit unions are the largest state chartered financial institutions in Nevada in part because many community banks merged or disappeared during the recession. Typically credit unions focus loan activity on local business. “There’s a void left after the recession in community banking, and some credit unions have stepped up to fill that void for the small and medium sized businesses that are key to the economies in the area,” said Hunting.

Sierra Pacific FCU has originated a number of SBA 504 loans, specifically meant for businesses to purchase buildings or machinery or for construction. They are seeking certification for SBA 7A loans, which are general purpose business loans, and just became eligible with the state to do USDA loans. “We’ve done everything from hotel loans to warehouses to office buildings and doctor’s offices,” said Hunting.

Not all credit unions operate the same way. GBFCU doesn’t do construction loans, and is very limited on what it can do for startups.

“It’s best to say you have to have been in operation at least two years,” said Hallock. “But there are times I can work with people if they’re close to that and get them to the point where I know they’re ready for a loan.”

AFCU, on the other hand, works with brand new businesses. “We sit down, give advice, tell them what we have to offer,” said Lund. “It’s often scary for someone getting started in a new business. Sometimes it feels overwhelming and we’re there to help the process and provide some guidance and suggestions.”

In terms of new regulations, S.2155 passed in the spring, offering some regulatory relief.

“Credit unions have been a little restricted because our business lending has been limited in what counts as business lending for us,” said Kershaw. Along with lending caps, there were restrictions about family units that weren’t owner-occupied, so a house purchased as an investment and rented out counted against the credit union’s lending cap.

“That was removed and it gives us more flexibility in being able to lend to businesses because it gave us more cap, essentially,” said Kershaw.

In some cases, credit unions are working with lawmakers to bring about new regulations, like finding ways to mitigate fraud when retailers and other organizations that don’t have strict policies and privacies in place are hacked. GBFCU is working with state legislators to put safeguards in place that require any business that accepts cards as a form of payment to adhere to certain privacy laws to help prevent hacking and ensure privacy for banking customers.

“There’s a place for both credit unions and banks in our financial industry,” said Burns. “It’s something that’s very essential and gives the public a choice. Most people don’t recognize the differences between a bank and a credit union because they operate very similarly. Banks are, for the most part, very transparent to the average customer as far as their strengths, [and credit unions] right now, their safety and soundness is just as stable as it is for banks. I don’t see that anybody has anything to worry about in that regard. It’s just that banks are more business oriented and credit unions more consumer oriented, though credit unions are expanding into the commercial role.”