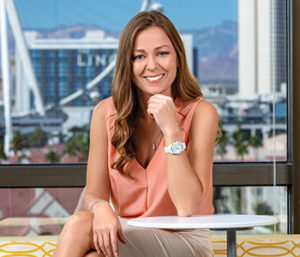 During the recession, brokers across the board did what they could to stay busy, from cold calls to out-of-the-box solutions. Nevada’s retail market was no different. Christina Strickland, a CBRE Las Vegas senior associate who specializes in retail, no longer has to make cold calls to drum up business like she did during the recession. Now, she’s receiving calls, in abundance, she said.

“It’s nice to be this busy, where you almost have too much to do,” she added.

The retail segment of the Las Vegas commercial real estate market is “strong,” Strickland said. Transactions are being conducted by national, regional and local retailers that are entering and expanding in the market. Lots of new construction, 924,104 square feet worth as of June 30th, is underway throughout the Valley, according to the commercial real estate firm CBRE’s “Las Vegas Review, Q2 2018” report, which contains the most recent data available. The 8.3 percent vacancy rate at second quarter’s end has decreased since, Strickland said. The steadily increasing average lease rate was $1.52 per square foot on last report.

Of significant note, Strickland said, the retail market continues to transform as many retailers strive to give customers what they want and ultimately, stay relevant and viable. This has translated into a move toward more entertainment, food and experiences and away from soft goods, such as apparel, and sporting goods.

This shift is evident in many new and redeveloped shopping centers, where the tenant mix is more diversified, with restaurants, maybe a fitness or other experiential facility smattered among the soft goods versus an all soft goods format.

In new centers, rather than a large anchor surrounded by ample shop space, the updated model has an anchor in a smaller than traditional box, perhaps a junior anchor or two and several pads. In general, most retailers are opting for smaller physical footprints.

Filling spaces left by large retailers isn’t a problem but looks different today. Rather than other large retailers moving in, often other entity types do, and sometimes two or three of them. In Boulevard Mall’s former Dillard’s space, for example, a call center occupied the top floor while John’s Incredible Pizza and Goodwill Industries took the lower level.

Driving these trends are retailers’ efforts to compete with ecommerce and millennials’ influence. Brick-and-mortar retail is here to stay, Strickland said. In fact, some ecommerce retailers are adding a physical component to their enterprises, like Amazon opening bookstores and purchasing Whole Foods.

Retailers are employing various strategies to draw visitors to their brick-and-mortar locations, such as offering entertainment, digital interactions or other enticements such as dressing room mirrors that facilitate selfies-taking or letting customers try products in the store. Some food stores are adding departmental concepts, like Smiths with its artisan- and cheesemonger-staffed specialty cheese shops.

The challenge and opportunity for retailers now is to make the customer experience, in the store and online, attractive and as seamless and convenient as possible, said Bryan Wachter, senior vice president, Retail Association of Nevada, the 2,100-member trade organization for sellers of goods and services. Some are providing click-and-brick, a melding to provide the best of both, by offering, for instance, online sales with in-store pickup or an in-store kiosk for ordering products online.

“Firms that can do that and capitalize on that I think we’re going to see around for a very long time,” Wachter added.

Retail also is seeing a preponderance of family entertainment-type businesses popping up, such as trampoline centers, laser tag places, indoor miniature golf courses, escape rooms and the like. Once relegated to industrial flex-type space, they’re now, more and more, moving into retail spaces, oftentimes filling vacant big boxes, and landlords are increasingly willing to accept them as tenants.

The shift away from traditional retail uses and the traditional retail center mix is “one of the primary challenges” for landlords and tenants as it requires a “change in mindset,” Strickland said. It also requires, in many cases, that leases be revised, as many still reflect the ideas of yesteryear, prohibiting or limiting certain retail uses in a center, for instance.

The retail market in Northern Nevada is trending similarly to its southern counterpart for the most part. One exception is that Reno-Sparks has a minimal amount of under-construction retail.

The region’s economic fundamentals in the region have been working in retail’s favor, including solid job creation, an uptick in business activity, a hot multifamily residential market, a strong office sector and more people moving into the area.

The overall vacancy in Reno-Sparks, as of the end of 2018’s second quarter, was 12.45 percent, which is 5 percentage points lower than it was five years ago, data from NAI Alliance’s “Reno/Sparks, Nevada 2Q18 Retail Market Report” showed. In the third quarter’s numbers, that rate should be lower, Bland said.

The most dramatic change in retail has been among the line shops, spaces sized under 20,000 square feet, filled by local, regional and national mom-and-pop type tenants. The vacancy rate among those dropped nearly by half as of June 30, 2018, to about 12 percent from about 23.42 percent in 2013.

Like in Nevada’s southern region, more and more entertainment-type enterprises are popping up and helping fill big box space. For instance, in Reno, Round1, an arcade, bowling and entertainment venue is taking over some of Sears’ former space. Urban Air Trampoline and Adventure Park has moved into a former Office Depot space.

The challenge for brick-and-mortar retailers today, Brand said, is “just staying relevant to the customer,” who wants options, convenience and experiences, and that involves competing with e-tailers. Many are making distinct efforts in that regard, such as providing click-and-brick opportunities. Other efforts are offering in-store sales or social gatherings such as customer appreciation events, and using social media to spread the word and draw people in. Some places, like Golf Headquarters, Bland said, are offering a level of customer service that’s unattainable online, sometimes in the form of on-site, knowledgeable and helpful salespeople.

Four-year-old Downtown Summerlin, the 100-acre, 120-tenant mall in Las Vegas, exemplifies many of these trends. The property’s executives purposely aim to incorporate a mix of tenants to include not just retail but, also, dining, entertainment, health and wellness, and other components, said Anthony Rossi, general manager, The Howard Hughes Corp.’s Downtown Summerlin. The goal, of course, is to induce people to visit the mall more often.

“We can’t stress enough about how important we feel the extracurriculars are, which help set us apart and make us that real community destination,” Rossi said.

The mall’s success also requires continually evaluating the national and local market changes and adapting the tenant list accordingly, Rossi said. For instance, the corporation added Brooks Brothers and Madewell in October. When Sports Authority and Golfsmith closed their stores, it leased the spaces to Bed, Bath & Beyond and the PGA Tour Superstore, respectively.

“We’re always focused on what’s next and how to improve the lineup as leases expire,” Rossi added.

Another strategy is continuing to find ways to upgrade its offerings. For example, this year a local group will organize and host the mall’s holiday parade instead of the ex-Nevada organization that did it in the past.

“We’re always challenging ourselves,” Rossi said. “We’re looking at it all over the next year and next three years.”

The shift in the retail market toward the positive came about five years ago, Strickland said, when it began recovering from the recession and bits of growth were taking place. The vacancy rate at that time was about 3 percentage points higher than the recent, mid-2018 figure.

“It’s just continued to improve from that point,” Strickland said.

She predicted that Southern Nevada retail will remain strong and grow, particularly in light of the array of commercial construction underway, the active housing market and dropping unemployment rate.

“I think most everyone involved in retail is optimistic,” she added, “but it’s more of a cautious optimism.”

The retail market likely will continue moving in the same direction for Northern Nevada, Bland said, with vacancy rates declining. As that happens, lease rates should rise high enough to justify new construction.

“Everything’s going very well in the Reno market, so it’s going to continue to shine on the retail sector,” Bland added. “It’ll continue to improve.”

The retail industry in Nevada as a whole is “energetic,” said the Retail Association’s Wachter. Retail employment, with available jobs likely outnumbering applicants today. Same store sales are increasing among major brands, which suggests they’re reinventing themselves and funneling money back into their retail locations. The amount of time vacant spaces are remaining on the market is shrinking.

A significant trend, and one Wachter believes will continue, is many companies are investing more in their employees, whether by providing additional training or paying for them to take college courses or raising the minimum wage, Wachter said.

The 2019 Nevada Legislature likely will see a bevy of retail employment issues, Wachter said, including right to work, predictive scheduling, paid sick leave, minimum wage, taxes, improving unemployment among 16 to 21 year olds, as Nevada laws need to catch up to the changes the industry has undergone over the past decades.

Effective as of the first of October, Nevada began requiring remote sellers to register and collect sales tax. They are out-of-state vendors that lack a physical presence in Nevada and that, in the previous or current calendar year, sold more than $100,000 in sales to Nevada, or conducted 200-plus separate transactions for delivery into Nevada. According to the state taxation department, this new mandate could generate an estimated $17 to $29 million for The Silver State.

As for how Nevada’s retail industry will fare over the next three years, Wachter said, “It is going to continue to keep improving.”