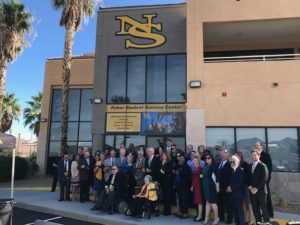 The College purchased this building in December of 2017. The acquisition and renovation of the building was made possible with funding from the Nevada Legislature.

During the 2017 Legislative Session, Assembly Bill 546 provided Nevada State College with $3.5 million towards capital improvement projects to fill immediate space needs. Of that amount, $1 million went to the acquisition of an adjacent two-story building. Those funds, in conjunction with funding from the sale of property gifted to the College from Jim and Beverly Rogers, allowed for the purchase of the building.

“We are pleased to add a new one-stop student success center to our growing campus to meet the needs of our diverse student population,” said Nevada State College President Bart Patterson. “Russell was instrumental in advancing the mission at Nevada State College and providing strategic leadership to the institution as a whole.”

J. Russell Raker served as the first associate vice president for the Nevada State College Office of Institutional Advancement where he worked with the college’s leadership team, the foundation’s board of trustees and the Nevada System of Higher Education (NSHE) to raise private funds.

Nevada State College, a four-year public institution, is a member of the Nevada System of Higher Education. Nevada State places a special emphasis on the advancement of a diverse student population. Located on a developing 512-acre campus in the foothills of Henderson, Nevada, the College was established in 2002 as a new tier in the state system between the research universities and the two-year colleges. Nevada State has grown to offer more than 45 majors and minors. Today, the College serves nearly 5,000 students and has over 4,000 alumni, representing a broad array of cultural and economic backgrounds. For more information, visit http://nsc.edu.