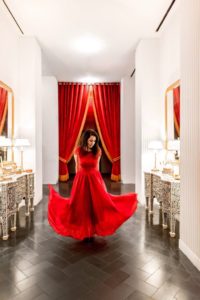 A little bit naughty and a whole lot of rock and roll.

That’s the idea behind the creation of the new Redbury New York.

Located in Manhattans burgeoning NoMad district, it is just a short jaunt from the Empire State Building, Madison Square Park, The Theatre District, Fashion District, Museum Row and all the boutiques, restaurants and nightclubs downtown. This legendary neighborhood was home to the late 19th century music publishing meccas known as Tin Pan Alley. World-renowned photographer Matthew Rolston dove deep into New York’s illustrious history as one of the birthplaces of American pop music and rock ‘n roll, incorporating elements of this narrative into the property’s 259 newly-renovated guest rooms and interiors. in addition to their thoughtfully – inspired accommodations, this NoMad neighborhood hotel is home to Marta, a Roman-inspired pizzeria and bar Marta, a cozy lobby bar, along with recently added Caffe March and Vine e Friti.

Earle Keizer, President, and CEO of BCT says “Our managed services Business Continuity and Disaster Recovery is based on three core tenets: 1) Protecting data and systems, 2)Redundant copies of data to protect you from ransomeware, 3)Virtual compatibility to recover IT infrastructure on the fly. Along with Datto, we are pleased to offer our services to this marquee New York City hotel.”

“We give our clients peace of mind,” says Rory Jackson, Manager of Technical Operations and a Datto Champion. I love the fact that the IT solution we offer is a type of bulletproof backup that used to be available only for large enterprises. The hardware and software built by Datto can capture a snapshot of a company’s entire IT system in just minutes. Since the system sits on the customer’s premises and in the cloud, the hotel can get back up and running from anywhere as long as it has an Internet connection.”

“We partnered with Datto, because they truly are the best in Disaster Recovery and Business Continuity. For example during the recent Hurricane Florence, Datto’s Disaster Response Team were in place in Raleigh, NC., ahead of the storm to get business back online; connecting their system to 4G LTE coverage through a remote device. No one was charged with the equipment deployed. For them it was the right thing to do,” says Lester Keizer, CEO of BCT. “This is the kind of security and protection we bring to Redbury Hotel.”

“To be a technology business partner with one of the great Historic Hotels of America is an honor and a privilege,” says Lester. “The managed service we provide helps hotel staff and their happy customers sleep well at night!