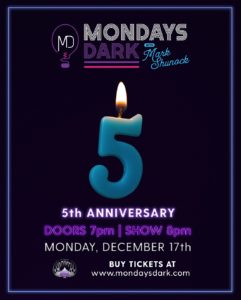 Mondays Dark to Hit $1 Million Raised for Charity Next Year

LAS VEGAS – It’s time for cheers, charity and fun for the fifth anniversary celebration of Mondays Dark, the twice-monthly celebrity-driven variety show benefitting local nonprofit organizations. With 42 charities under one roof, the anniversary party has become one of the largest philanthropic events of the year. It happens Monday, Dec. 17 at The Joint inside Hard Rock Hotel & Casino.

Guests will enjoy a stellar night with some of Las Vegas’ top entertainers who will be announced in the coming weeks. Festivities also will include a live and silent auction with art, show and concert tickets, dining packages, spa treatments, jewelry and other great prizes, and the reveal of the 21 Mondays Dark beneficiaries for 2019.

“I can’t believe Mondays Dark is five years old. I love our year-end celebration which brings all of our partners together as well as our new ones for next year ‒ 42 local groups celebrating each other under one roof. It’s a cool party,” said Mark Shunock, entertainer and philanthropist who founded Mondays Dark. “In 2019, we’ll hit the $1 million mark in funds raised, and this is something our team is extremely proud of.”

Doors for the Mondays Dark fifth anniversary party open at 7 p.m., and the show begins at 8 p.m. Tickets are $20, $30 and $40 per person. There are also seven VIP Box Suites available at $1,500 for 12 people including food and cocktails. The Hard Rock is located at 4455 Paradise Rd. Tickets are available at www.MondaysDark.com.

Shunock developed the idea to give back to the community and support local charities with Mondays Dark in 2013 when he was starring in the hit Broadway musical, “Rock of Ages.” He enlisted some of his entertainment friends to help, and Mondays Dark was born. The popularity and reach of the fundraisers has continued to grow with charities and performers eager to be involved. By year’s end, 80 nonprofits will have been helped.

Mondays Dark was named “Best of the City” from Vegas Seven in 2014 and “Best of Vegas” from Las Vegas Weekly the following year. In addition, Shunock received the 2014 Angel Award for Cultural Advocate/Entertainer of the Year and was named Best Philanthropist from “Best of Las Vegas” and the Las Vegas Review Journal and the Impact Award from the Association of Fundraising Professionals Las Vegas Chapter for Mondays Dark.

About Mondays Dark and The Space

Mondays Dark was founded in November 2013 by entertainer and philanthropist Mark Shunock, who currently can be seen as the emcee for “Magic Mike Live” and the in-arena host for the Vegas Golden Knights. He wanted to provide the community with a sizzling mix of entertainment, music and comedy while supporting the many charities in Southern Nevada. To date, the 501(c)3 organization has raised more than $800,000 for local nonprofits, one event at a time, one ticket at a time. With the opening of The Space arts complex in 2016 by Shunock, Mondays Dark found a permanent home and opened the door to a wide variety of additional community outreach to Las Vegas – from local productions to children’s workshops, from targeted fundraisers to Mondays Dark events, and from fashion shows to weddings. Quickly earning a reputation for hip and intimate experiences, The Space features a 3,000-square-foot raw performance space, black box theater, two rehearsal studios, podcast/recording studio, and a vintage piano bar and lounge. It is located at 3460 Cavaretta Court off of Polaris Ave. just north of Harmon Ave. For additional information on Mondays Dark, including updates on The Space, programming and charitable events, visit www.MondaysDark.com or www.TheSpaceLV.com or connect via Instagram @MondaysDark, Twitter @Mondays_Dark or Facebook at www.facebook.com/MondaysDarkLasVegas.