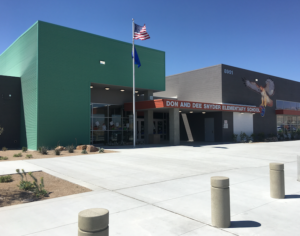 Hirschi completed the project in December 2017

Hirschi Masonry, a premier masonry contractor based in southern Nevada, is proud to celebrate the upcoming one-year anniversary of the completion of work at Don and Dee Snyder Elementary School.

“This was one of our top projects of 2017, and we are excited to celebrate the one-year anniversary of the project’s completion,” said Chad Hirschi, president, and CEO of Hirschi Masonry. “At Hirschi, we are passionate about education, and we are honored to have been a part of building this new elementary school that will provide top-quality education to our valley’s youth.”

Hirschi began its work on Don and Dee Snyder Elementary in February 2017 and completed the project in December 2017, with a crew of thirty on site. Hirschi built six buildings total and a perimeter retaining wall, installing around 90,000 concrete masonry units in ten weeks.

Don and Dee Snyder Elementary opened in January 2018 and is a STEAM school with a primary focus on science, technology, engineering, arts, and mathematics. The elementary school also has a robotics program, a rarity for elementary schools in Nevada.