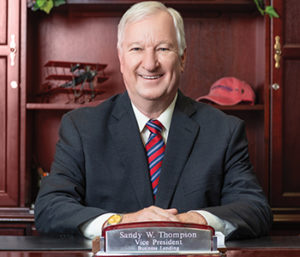 A tremendous number of loans for commercial real estate (CRE) projects are being sourced and approved in Nevada in what’s described as a robust market being driven by industrial and multi-family properties.

In today’s market, “The cost of money to borrow for the long term is actually approaching less than short term, which has some implications. But, the bottom line is, we’re suggesting if they’re going to pull the trigger to acquire new properties for their own portfolio and occupy them, or they’re looking at existing, that they either consider refinancing or to pull those triggers sooner rather than later and look seriously at fixed rate loan products,” said Aney.

There are four broad categories of CRE, industrial and multi-family, which are pretty much driving the market, and retail and office, which are growing again after a long, recession-caused hiatus.

“We’re seeing some projects on the office side, some that are well located, good sub-market office space, both for construction and refinance side, and really have been doing some good business in the mixed-use side,” said Zaby.

Mixed-use projects are primarily in Southern Nevada. In Northern Nevada, there’s a need for more office space, while the South is only looking at very well located Class A office projects, or infill projects in areas like Henderson.

One of the sectors driving CRE financing statewide is multi-family apartment complexes. For the real estate lending division of Nevada State Bank, it’s also a chance to dip into a new part of the market, age-restricted, 55 and older communities.

As people continue to migrate to Nevada from California, age-restricted communities are a CRE sector that seems to have been missed. A lot of the existing product is 10 to 15 years old, and new product is in construction.

Retail, curtailed by the recession, recently slowed its modest growth because of what some are calling the Amazon factor. When Amazon began delivering groceries, retail took a step back.

Most banks will consider most CRE projects initially; due diligence then determines whether to go forward to financing.

“The area we really have been cautious about, not that we’re not doing it, but the retail space has been a little hit or miss,” said Zaby, citing the Amazon factor. We’ve been shying away, skeptical for more retail, especially non-anchored retail.”

One Nevada Credit Union, which works with members on property acquisition and refinancing of existing properties, finds the more generic the property, the easier it is to finance.

“If it’s a management intensive property like a hotel or motel or has items like a [convenience] store with underground storage tanks or retail center with onsite dry cleaning plant, that creates a few more hoops we have to jump through to get approval,” said Sandy Thompson, vice president of business lending at One Nevada Credit Union. “We look at each loan on their own merit and look at the property’s operating history and the strength of the tenants on the property, the borrowing entity and the guarantors.”

In recent years, One Nevada Credit Union has seen their highest request volume on retail.

“We have done office and smaller industrial properties, and we actually have a fairly broad base of property types we’ve done over the last couple years, including medical offices, learning centers, mobile home parks, convenience stores and we’ve done fast food restaurants and some restaurant-bar-gaming facilities as well as hotel/motel properties,” said Thompson. “Probably the largest volume we see in requests is in retail, followed by small industrial and then office.”

“Industrial and office space right now are going to be your two main sectors, driven by vacancy rates. A lot of industrial right now is build-to-suit or for specific type tenants and specific type projects. Obviously that makes it easier for us to loan on when there’s a tenant in tow,” said Zaby.

“It’s not that we’re opposed to office, the vacancy rates are rather high here in Vegas except when you go downtown Las Vegas, vacancy rates are probably sub-seven down there. You really have to look at each individual deal and determine what the need is for that project in that vicinity.”

Older garden-style product makes up a lot of the vacancies; banks are looking for pre-leased projects, Class A projects. “We haven’t seen any requests for office product over this year, or really a good portion of last year.”

Projects, Places and Purpose: Getting Financed

Who’s looking to finance CRE projects in Nevada? Developers, often with a tenant in tow for a build-to-suit project, and investment-type trusts that are buying and financing on longer term assets to buy and hold, Zaby explained.

Developers throughout Nevada are looking for financing for multi-family complexes, though that side of the CRE industry may have reached its peak in Southern Nevada and be slowing in the North.

“We want folks that have good partnerships with their developers, their contractors, that’s a huge part of getting construction loans, to know that you have a contractor who can and will deliver,” said Zaby.

In a market where construction costs are rising and there’s a labor shortage, banks want to be certain the projects will be finished.

Pre-leased projects, existing or new construction, have an advantage. “It always helps to show the property can generate cash flow to support the loan that they’re requesting,” said Zaby.

“The people we’re working with generally come in with a loan package that’s complete,” said Jenkins. “They’ve gone through the regulatory aspects locally to make sure the building can be what they want to build on that particular project, they’ve done a cost analysis to build, and usually a market study on why that building works there as far as lease rates.”

The bank then validates the need for the type of building, the support from developers and investors, and the track record of the parties involved with the type of product.

All Over the Map

Nevada is a distribution hub for the western states with one-day delivery times from Northern Nevada to the edge of Seattle and from Southern Nevada into Los Angeles and Phoenix.

Jenkins said the industrial deals Nevada State Bank has bid on is mainly in Sparks, off I-80, heading both west and east, and even further east, at Fernley, 30 miles out of Sparks.

“The industrial space Las Vegas has seen in the last 12 months is 5 million square feet of industrial delivered and made available, and 7 million square feet of absorption,” said Aney. “You end up with a vacancy rate in the industrial sector between 4 and 5 percent, much like Northern Nevada industrial at 6 percent. With that growth we’ve also seen tremendous pressure and opportunities in the multi-family sector. In the Las Vegas area, probably about 50 percent of that multi-family growth is along the 215 corridor including Summerlin.”

There isn’t a geographic sector most banks won’t consider for CRE project financing if the developer is confident in the product type and the investor, owner or developer has a good balance sheet and liquidity. But there aren’t as many CRE projects in rural counties, and those that do seek financing are often motel/hotel projects that aren’t as appealing to lenders as industrial or multi-family.

“We probably get four requests a year from rural areas,” said Jenkins. Most are for the motel/hotel properties, very few for multi-family, and those declined as the price of gold dropped.

Banks prefer to lend on projects in markets where they have branch offices, though most will consider projects in rural markets. Mutual of Omaha Bank has financed projects in Laughlin, Elko and Winnemucca.

“We really do try to stay in our lanes of the markets where we’re doing business, where we have branches and employees,” said Zaby. Still, he noted, “Our bank will look at any project in any area, any geographic.”

One Nevada Credit Union has branches in Clark and Washoe counties and members need to live or work in the county. Once they’re members, however, One Nevada can lend statewide, and has done deals in Elko and Fallon and considered projects in Carson City, Dayton and Ely.

After global financial markets faltered in 2008, the Dodd–Frank Wall Street Reform and Consumer Protection Act was signed into law in July 2010. The intent was to improve financial stability and increase consumer protection.

“Initially it did create a more restrictive lending environment, which I think has kind of eased up with time as the financial markets have improved,” said Thompson.

A credit union doing a CRE or member business loan is regulated by National Credit Union Administration Part 723, which was modified in January 2017. The change put more responsibility on individual credit unions and their underwriting, but also helped streamline the lending process, according to Thompson.

Banks today try to be both more prudent in lending practices and more diverse. Should another 2008 economic downturn happen, the more diverse a bank’s portfolio the better the institution’s chances to survive.

According to Jenkins, there’s more equity in deals than what was seen in the past. “We’re probably looking at developers that have more liquidity than they’ve had before, and I think, regulatory-wise, that’s pushed underwriting to be a little more conservative.”

“The underwriting itself hasn’t necessarily changed,” said Aney. “We may have more questions than we did in the past, but the reason there’s more loans being made now is the economy changed and there’s more quality opportunities and balance sheets, people now have equipment they didn’t have in 2012, have equity they didn’t have before.”

A lot of primary markets turned around faster than Nevada’s CRE markets. However, according to Jenkins, in markets like Los Angeles, “those value propositions for developers have really swamped. Start something new and it’s tough to make money on it there, the gap rates have gotten so narrow.”

Now it’s Nevada, which turned around after the economic downturn later and more slowly than primary markets, where there’s value and strong profitability.

“We’ve probably booked four or five new customers in the first not quite eight months of the year,” said Jenkins. “Almost all of them are from out of state. The market is really positive here for a lot of folks.”