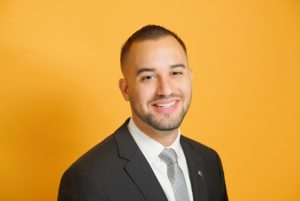 Henderson – Nevada State College announces Anthony Ruiz as new senior advisor of Government Relations and Community Affairs for Nevada State College. A Las Vegas native, Ruiz will be responsible for working with state, local and federal government officials and their staffs to successfully execute the College’s mission and Board of Regent approved initiatives. This position is also responsible for helping build productive relationships within the business community and with other key local and state stakeholders to help ensure the strategic initiatives of the College are achieved.

Ruiz brings six years of public affairs and communications experience to his new role at Nevada State College. He joins the team from the Las Vegas Global Economic Alliance (LVGEA) where he held the role of senior director of communications and public affairs for two years. There he managed public affairs initiatives for the LVGEA and built strategic partnerships to further the organization’s mission.

“Ruiz has a strong track record in the Las Vegas community. We welcome his government and public affairs expertise, and strategic leadership at a time that Nevada State is rapidly growing,” said Nevada State College President Bart Patterson. “His passion for government relations will be instrumental.”

Before joining Nevada State College, Ruiz had a significant impact at the LVGEA. Before senior director of communications and public affairs, he was director of marketing and community partnerships for the LVGEA.

Following graduating from Lewis & Clark College in Portland, Oregon, Ruiz worked at Erickson Group Ltd where he was a business analyst and marketing specialist. In his role he managed relationships with city leaders, led the rebrand and marketing strategy for an aviation company with more than 60 employees, and developed four international websites generating 85,000 page views over a 12-month period.

Ruiz currently serves as founding board member and secretary of the Nevada Economic Development Association. He is a member of the board of alumni at his alma mater, Lewis & Clark College.

Ruiz received a Bachelor of Arts degree in rhetoric and media studies and political science from Lewis & Clark College in Portland, Oregon. He also attended the Economic Development Institute at the University of Oklahoma. Ruiz graduated from Desert Pines High School in Las Vegas before moving to Portland to pursue higher education studies.

Nevada State College, a four-year public institution, is a member of the Nevada System of Higher Education. Nevada State places a special emphasis on the advancement of a diverse and largely under-served student population. Located on a developing 500-acre campus in the foothills of Henderson, Nevada, the college was established in 2002 as a new tier in the state system between the research universities and the two-year colleges. In this role, the college emphasizes high-quality instruction, exemplary service, engaging learning experiences, and innovation as a means to more efficient, effective outcomes in all corners of the campus. Since 2002, Nevada State has grown to offer more than 45 majors and minors, has received independent accreditation, and has expanded its physical campus. Today, the college serves approximately 4,800 students and has over 3,400 alumni, each representing a broad array of cultural and economic backgrounds. For more information, visit http://nsc.edu.