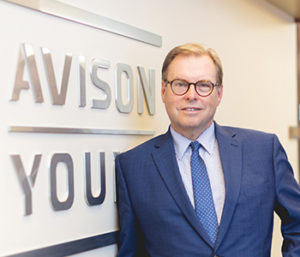 All three commercial real estate sectors – industrial, retail and office – are growing in Nevada, though at different speeds by sector and geography. Industrial is driving the growth, office is still lagging but beginning to grow and retail is returning as the economy continues to recover.

Commercial real estate sectors might be experiencing growth, but investors, businesses and lenders are moving more cautiously than they did before the economic downturn. Which means companies are repurposing existing buildings, lenders require some new properties to be pre-leased before coming onboard and, while property managers are busy and there’s a limited number working on the commercial property management side, there’s still competition for business.

“It’s highly competitive on the property management side,” said Jewkes. “It’s a service industry and a low margin business and it supports the higher margin transactions part of the commercial real estate business. But you must do it very, very well because you’re managing other people’s money, and it’s very competitive. If you don’t do a good job, there are five others that will step right up and make a pitch.”

“Good commercial management companies are consistently busy because the industry is quite small if you look at the number of property managers who do residential, apartments and multifamily properties,” said Lauren Vaniski, director, Logic Property Management.

There might be competition, but every commercial property needs a manger, said Vaniski; there’s plenty of work to go around and friendly competition with other property management companies.

One reason competition can remain friendly is that the percentage of the industry doing commercial property management is small. “Most managers who have a management permit in Nevada do residential management and that’s reflected within the number of commercial management companies here in Las Vegas,” said Vaniski. Commercial remains competitive because the fee charged for transactions is higher than in residential due to the nature of the product being managed.

. “That doesn’t mean there’s not a lot of property managers out there, but they can do the condominiums and HOA’s and apartments and single family dwellings. There’s a niche for everybody.”

Nevada’s commercial real estate (CRE) industry is still recovering from the economic downturn, aided by growth from businesses relocating from neighboring states and homegrown entrepreneurial startups. The demand for industrial space is driving the CRE market.

The last recession affected every CRE sector, especially retail in Nevada, which has recently seen an uptick in business. National brands are returning to Nevada and mom-and-pop stores opening. Lots that have been standing vacant are filling in.

As retail centers lease up again, previously self-managed centers seek property managers as owners realize it’s too much to handle for the time they have to invest, said Vaniski.

“They want to get their hands off of it and a professional’s hands on it, so it does help us to see an uptick in the business sector.”

Commercial property management divisions are often the most profitable in a CRE brokerage. NAI Alliance in Northern Nevada originally formed as Alliance Commercial and in 2006 joined up with NAI; the commercial property management division has been onboard all along. For Logic, the division is three years old, and Avison Young has had theirs for the life of the company. Everyone has seen the market pick up in the last couple years.

The recession changed the market. What’s going on in 2017 and 2018 in commercial real estate is nothing like what was going on in ‘05 to ‘07, said Jewkes. “The money is far more, and not nearly as leveraged, the fundamentals of the market are starting to be a little bit broader. We all know our major industry is still the same, and will be, but there’s a growing level of sophistication to regional and entrepreneurial growth we’re seeing going forward. There’s still a lot of the Southern California reasoning to open regional offices or move their companies into the market and the – for lack of a better word – sexier areas are still up in the curve and the Summerlin area and the Henderson area as well.”

“Certain [CRE] sectors are stronger than others,” said Jewkes. Of the Southern Nevada market, “The industrial side has come back about the strongest, with very low vacancy rates and new product coming online which appears to be leasing up rather quickly.”

In part that’s because the market has been a little more discovered by those tenants most apt to occupy the types of enormous industrial spaces Southern Nevada can supply. The spaces major occupiers, like Amazon, are taking are enormous, some as large as 800- and 900,000-square feet, and the product is being snapped up. It’s the high-end, enormous warehouse and distribution center spaces dominating the market.

“The industrial market is on fire in Northern Nevada,” said Clark. “It’s doing very well.” The volume might be new, but the reason isn’t – Reno is positioned perfectly for transportation of product from manufacturers or distribution centers.

“We’re close to population centers, a.k.a. Sacramento, San Francisco, Portland, but there’s no personal property taxes, no inventory taxes, it’s a sweet deal to be 11 miles from the California border but still have the tax rates and incentives Nevada has,” said Clark.

While Northern Nevada has long been a great location for warehousing and distribution, lately more light manufacturers that are exiting California are fueling the Northern Nevada industrial market. Vacancy rates are falling for industrial products. Smaller products like 20,000 square foot buildings are becoming scarce.

“For the most part, the industrial market has got a very low vacancy rate,” said Clark. “Not so much for office and retail. There are still some good deals to be had in the office market and also in retail – that’s had a harder time coming out of the recession.”

In Southern Nevada retail can be anything from an unanchored strip center of 40,000-square-feet in Henderson to a regional mall on a major parkway and everything in between.

The office market in Southern Nevada continues to have higher vacancy rates than other sectors, partly because it was overbuilt in the economic boom before the downturn.

“Part of the reason for that is available capital. Financial markets have not yet wanted to go much at risk like they did 10 years ago to allow developers to easily develop office product until we see vacancies go down market-wide,” said Jewkes.

That doesn’t mean there isn’t new product coming online. Hughes Corporation has built some new Class A office space which leased up. But it’s hard for other developers to access the capital for spec building without preleasing, which is holding up that part of the market. Class A can be anything from a new 80,000-square-foot skyscraper to a 20-year-old property that’s gone through rehabilitation and renovation.

Class A might be leasing, but classes B, B-minus and C properties in less desirable areas aren’t. That’s a fairly normal market condition, said Jewkes, one that will generate reuse, redeployment and redevelopment of some of those buildings in the future. “Something will have to be done if people aren’t looking to locate businesses in those areas and are focused on higher end demographic areas.”

Class B properties are generally under 80,000 square feet, and class C have less desirable locations, can be of any size, but likely haven’t been renovated. But when it comes to new versus existing, possibly less desirable buildings for rent, decisions are made business by business, Vaniski said, and if somebody is driven by the economics of leasing an office building, they may go to an older building in a certain area of town.

“We have a lot of businesses coming into town and repurposing large previously vacant spaces like a Circuit City that’s been vacant for 10 years or another very large big box property. We’ve seen companies come in and make that into an open office concept or a call center and take it from retail use to an office use, so people are being creative when opening businesses here and repurposing some of the larger vacancies we’ve had,” said Vaniski.

Space available in those less desirable locations contributes to vacancy rates. “We remain confident it’s just a matter of time because the interest in the market continues to generate expansion or relocation from entrepreneurial efforts or other markets or big companies needing regional offices, “ said Jewkes.

Do businesses follow geographic boundaries or is it more that industries built one after another in those particular areas?

“It’s a bit of both,” said Jewkes. “We have sectors in our market that decision makers coming into the market or relocating from other parts of the Valley see as more desirable.” Those areas are performing well.

At the curve, for example, the draw is visibility – thousands of commuters pass the location on their way to work along the 215 Beltway. That’s important for finding customers. For recruiting and retaining employees, workday amenities become important. When commercial buildings have been vacant for a while, those amenities move out too, which is why areas that were fine for a commercial building 20 years ago might be struggling today.

Businesses also like to locate near rooftops, close to where their workforce lives.

“We’re a very mobile society and a lot of people like to drive themselves to work and back,” said Clark. That’s one of the reasons Tahoe-Reno Industrial Center located between Sparks and Fernley on I-80 might not be the first choice for employers moving to or expanding within the Northern Nevada market. Commuter buses are now running that route, which will help, but for new industrial buildings, Sparks is becoming desirable because there’s affordable land available and new residential building nearby.

Commercial property management spans the gamut from soup to nuts full-service packages to the day-to-day boots on the ground oversight of the physical building through facilities management.

“In full-service property management, we basically stand in for the owners,” said Clark. “Most of the time the owners are out of state, and they may not visit their properties more than once or twice a year. So we are the total interface for tenants, all the contractors, the vendors, that work the property.”

The full service package may include monthly financial reports, collection of rents from existing tenants, physical maintenance of the buildings and hiring of contractors and landscapers. It can include offering clients management, leasing, lending and receivership services, said Vaniski.

Facilities management is focused only on taking care of the physical property, without the additional collection of rents or the creation of financial statements.

Property management clients can be individual or group investors, banks, property owners or people looking for properties to own.

“Everyone has certain priorities when coming in to look for management for their properties,” said Vaniski. Logic’s­ clients aren’t only property owners; they’re also tenants who need to be satisfied with the property they’re renting. “We essentially talk to everybody and make sure we understand where they’re going with [our services] before we move forward with a management plan.”

Because one size doesn’t fit all, and the competition is fierce.