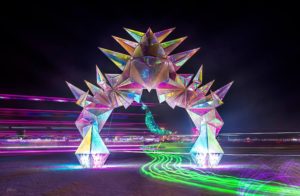 Large scale, festival-inspired art will be for sale and integrated throughout AREA15

AREA15, the experiential retail and entertainment complex opening in late 2019 in Las Vegas, announced the project will include an indoor and outdoor art gallery with large-scale works of art for sale to the public. Curated by Joshua Levine of Fired Up Management, unique and dynamic pieces of art will be sourced from around the globe, taking AREA15 visitors on an artistic journey like no other. Davis McCarty’s Pulse Portal and Ivan McLean’s Trogdor, a fire breathing dragon, will be the first of many pieces to debut in the gallery. AREA15 is a development project led by a joint venture between real estate development firm Fisher Brothers and creative agency Beneville Studios, both of New York.

“When conceiving of AREA15, we always considered art to be central to the visitors’ experience,” said Winston Fisher, CEO of AREA15 and Partner of Fisher Brothers. “We are thrilled to be working with Fired Up Management to bring these incredible artists and their work together in one place.”

AREA15’s immersive bazaar concept of blending together music, events, commerce, food, drink, technology and design, led seamlessly to the idea of an art gallery. Projected to be one of the most eclectic and compelling galleries of its kind, the featured works of art will evoke the feeling of being at popular outdoor desert art festivals and trending interactive pop-up installations. While some of the art will be on display inside AREA15, a majority will reside outside on the expansive parking grounds of the complex, appealing to visitors of all ages and levels of art appreciation.

“Art is in the DNA of AREA15,” said Michael Beneville, chief creative officer of AREA15 and founder/CEO of Beneville Studios. “We want our visitors to feel a sense of discovery and playfulness from the moment they arrive in the parking lot. These spectacular pieces of art are rarely seen in urban settings. They’re a unique backdrop to the Las Vegas cityscape and the AREA15 experience.”

AREA15’s first two installations will be by artists Davis McCarty with his piece Pulse Portal and Ivan McLean’s project entitled Trogdor. McCarty is known for his use of geometric patterning and space age materials to create experiences that transport his audience to another dimension. McLean is a sculptor in Portland, Oregon, working with a variety of materials and styles. He creates commissioned installation pieces of any size for both public and private spaces.

The gallery will include a variety of artistic mediums, large sculptures, industrial art, custom builds, fabrications, extreme performance, new media projection mapping, LED and video. A range of 15 to 20 pieces will be on display and offered for sale at any given time.

The gallery space will be open to the public, complementing AREA15’s own collection of art by local and international artists Henry Chang, Bart Kresa, Matt Elson and Ibuku.