You are here: Home / Press Release Wire / The Space Gets Hotter this Fall with Broadway and Hollywood Recording Stars — The Space just west of the Las Vegas Strip announces Fall Concert Schedule 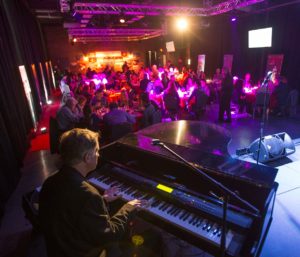 With a venue reminiscent of San Francisco’s underground music scene in the 1960s, The Space has quickly earned a reputation for hip and intimate experiences unparalleled in the city built on exceptional entertainment. Located just behind Aria and The Cosmopolitan, The Space is announcing an eclectic fall concert and event lineup that includes Tony winner John Lloyd Young from Jersey Boys, Wicked star and recording artist Shoshana Bean, brilliant Native American performance artist Alexandro Querevalú, and Michael Winslow of Police Academy.

Initially created as the home of Mondays Dark, a twice-monthly celebrity-driven variety show that has raised more than $800,000 for local charities in southern Nevada, The Space also has emerged as the haven for the arts and artists in Las Vegas, presenting a wide variety of avant-garde concerts, performances, comedy shows, and other events in an intimate setting.

“In a short period, The Space has captured the attention of the entertainment scene here in Las Vegas and beyond,” said Mark Shunock, the venue’s owner and creator. “I knew we would host some amazing shows in between Mondays Dark, but I never thought that our funky theatre off the Strip would attract the national and international talent it has. In The Space, audiences appreciate the up-close and personal vibe they get with the performers.”

This fall, The Space also will premier ComedySportz, the internationally-acclaimed and hilarious improvisational comedy group featuring two teams of professionals who compete for laughs, points and audience support. Shows are scheduled for Friday, Sept. 21 and Saturday, Oct. 6 and 20. Monday’s Dark will return on Sept.10 and 17 and Oct. 8 and 22, with proceeds benefitting the following nonprofit organizations:

The Space is located at 3460 Cavaretta Court, off of Polaris Ave. just north of Harmon Ave. Ticket and concert information can be found at www.thespacelv.com.

The Space is the brainchild of Las Vegas entertainer and philanthropist Mark Shunock, also known as the Host for the Vegas Golden Knights and MC for Magic Mike Live. The performance and event venue is a haven for all arts and artists in Las Vegas and designed to accommodate a wide variety of events including the award-winning Mondays Dark. The arts complex features a 3,000-square-foot raw performance space, black box theater, two rehearsal studios, podcast/recording studio, and a vintage piano bar and lounge. For more information on The Space, please visit www.thespacelv.com, like on Facebook at www.facebook.com/TheSpaceLV, or follow on Instagram and Twitter @TheSpaceLV.
# # #