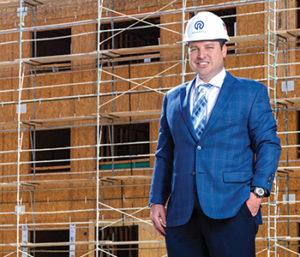 Nevada commercial developers and builders reported that their workloads are full, but not without challenges.

Much like R&O, Penta Building Group is swamped and has been this entire year. To manage growth, the firm is not pursuing additional clients, but will take on new projects if they’re a good fit. The general contractor’s current Southern Nevada jobs include the Las Vegas Ballpark in Summerlin for the 51s, in a joint venture with Hunt Construction Group, the Caesars Forum conference center and phase four of the Showcase Mall.

“We have to pinch ourselves sometimes because we spent the last eight years in a whole other market, and it almost feels like we turned on a dime,” said John Cannito, chief operating officer.

“The commercial real estate market is on the upswing and continuing to rebound with a backlog of projects to be completed that had been put on hold during the Great Recession,” said Sam Nicholson, president and founder, Grand Canyon Development Partners in Las Vegas. This commercial developer of primarily large projects is the owners’ constructive representative for the Las Vegas Stadium for the Raiders, the development manager for completion of The Drew Las Vegas hotel and casino (formerly the Fontainebleu) and just finished building Noah’s Animal House in Reno.

“Whereas the industrial and retail sectors have come back fairly strongly, office hasn’t,” Opheikens said. Vacancies remain high, and the occupancy rate is lagging although, “new product is going up and new plans are being drawn. Retail centers are being repositioned,” he added.

Southern Nevada is seeing growth in construction of new facility types—arenas, stadiums and other sports complexes.

One market positive is that there’s ample work for everyone. Construction jobs in the Silver State have increased steadily over five-plus years, reaching a total of about 85,200 as of March 2018, according to RCG Economics, a Las Vegas-based market trend analysis and economic research firm. As of that same time, the Las Vegas MSA had about 60,650 construction jobs, a 55 percent increase from 39,000 in March 2013. The Reno-Sparks MSA had about 16,940 jobs, a 76 percent rise from the 9,600 in March 2012.

The market is active with investors and businesses searching for space or looking to purchase property. Unlike two to three years ago, capital now is being reinvested in the state.

“That has played a big factor in the recovery of the construction and development industry,” Nicholson said.

The development that’s taking place is “pretty mature and sustainable,” Cannito said. “For the most part, the main clients on the Strip and in markets are putting on capital improvement programs. [They’re] being thoughtful about how it is done and how they want to do it over the next few years.”

According to Larry Monkarsh, managing member and founder of LM Construction Co. LLC, headquartered in Las Vegas, today’s industrial market consists of build-to-suit, end user-driven projects. This is compared to the primarily speculative projects characteristic of the market between 1996 and 2006.

“It’s a little bit more cautious,” he explained. “I believe there’s a purpose for, I would say, 90 percent of the projects going on out there in the industrial world.”

LM Construction concentrates on industrial but also takes on retail and office builds. Having just finished the design-build of the Founders Academy of Las Vegas, it now is erecting six buildings totaling 146,000 square foot at the Southwest Sunset Corporate Center and constructing a 78,000-square-foot, concrete tilt-up, dock-high industrial building in the Cimarron Corporate Center—all in Las Vegas.

As for Nevada’s commercial real estate industry, Monkarsh suggested, “It has some issues. If you’re going to do an analogy with a human being, [the industry has] maybe a little bit of high blood pressure, a little bit of this and that. But, for the most part, I think it would get a clean bill of health.”

A major ongoing challenge is the labor shortage and a lack of skilled individuals. Added to that is an aging workforce with all positions, from craftspeople to general contractors, and their talent retiring when they do.

“It’s a big deal for everybody,” said Lance Semenko, president of Sparks-based Q&D Construction LLC. The company is comprised of building, civil and aviation divisions. The building group recently completed a chocolate factory in Sparks and the E.L. Wiegand Fitness Center at the University of Nevada, Reno. Now, it’s constructing the Northern Nevada State Veterans Home in Reno.

Despite there being as much work today as during the most recent, pre-recession construction peak, Southern Nevada only has about 60 percent of the total number of people employed in construction as it did. Data from the Associated General Contractors of America showed there were 70,000 people in the industry as of December 2017 versus 112,000 people in mid-2006.

“We simply do not have the people to put on every project that is waiting to start,” Opheikens said.

“Everything is costing more,” Semenko said. “The pricing is not hitting the developers’ budget per se. Some projects aren’t penciling for owners.”

Labor prices are being driven up by the lack of qualified tradespeople, general laborers and other building/development professionals. Developers may be forced to hire less skilled and efficient workers, leading to lower productivity.

The cost of materials, particularly lumber, steel and aluminum, have risen since before the federal tariffs on the import of these commodities from Canada, Mexico and the European Union went into effect. Oil prices are creeping up, too.

With fluid costs, “it’s difficult to plan a project today that may not start construction for six to nine months,” Monkarsh said. The future unknowns concerning these tariffs have builders and developers concerned.

“We don’t know where these tariffs are going to go and what that’s going to do,” Opheikens said. “It has us sitting on the [edge of our] seat. We don’t know how the current administration’s tariffs will impact the whole of Southern Nevada. I, for one, am concerned it will negatively affect commercial development.”

As for land, it’s more expensive now because the market is strong and development is taking place. In Northern Nevada, land “is getting scarce,” Semenko said. In Southern Nevada, it’s “in shortage,” said Monkarsh, adding the cost is “pricing some people and some product types out of the market.” There are instances where, businesses or individuals are forced to compromise on location.

“It certainly makes it more challenging for developers and owners to maintain a healthy pro forma when they’re paying for the cost of their work,” Nicholson said.

The current supply of available land for purchase can’t meet the demand, Opheikens said. It’s an “artificial supply shortage that could be remedied” if the U.S. Bureau of Land Management were to release meaningful quantities of the acreage it owns.

“This [avoidable land shortage] stymies growth and development and creates cost inflation that needs not exist,” Opheikens added. “This will continue to weigh down the market and challenge us moving forward.”

A battle is taking place between commercial and residential developers and builders for affordable, available land. “Buyers and sellers out there know that,” said Monkarsh.

As seen in the early 2000s, residential developers are dealing with the shortage by rezoning commercial properties for homes, condos and apartments, Opheikens explained.

“[It’s] creating the same unfortunate pressure, as well,” he added. “It becomes a cycle that will continue to hold up growth and hurt the market.”

In an environment of increasing all-around costs, developers and builders may resort to dollar-saving measures. For example, while they generally may prefer to build all steel roofs, they might opt to use wood instead if it is more affordable.

In Northern Nevada, national companies primarily build the large projects whereas local firms take on the small to medium jobs, said Semenko, noting that Q&D targets all sizes. The number of local businesses is about the same as it was in the mid-2000s.

Southern Nevada competition is “fairly stiff,” Monkarsh said, as “there’s only a limited amount of contractors that can do it all.” It has become fiercer over the past three to five years as available work has increased and contractors have expanded to take on more projects, Cannito said. In the larger, hospitality/gaming sector, competition is heavy,” Nicholson said, as only a select group of developers tackles these projects.

There is less competition among the smaller companies handling the under-$500,000 contracts, such as tenant improvements. However, these businesses likely will grow, too, and subsequently compete at higher levels.

“This is good. It opens the marketplace up to competition and helps to create jobs,” Opheikens said. “It will also hopefully draw more people into the trades where we’re short on skilled labor.”

One notable focus of developers and builders is on efficiency, or lean construction. This approach encompasses more pre-construction work than in traditional construction, incorporating environment-friendly and other features early in the design phases and use of virtual design software programs to model projects. The latter, for instance, lets developers coordinate the various trades on a job prior to being in the field. It allows developers to explain to their clients, through a visual demonstration, the logistics of how a project will be built.

In the industrial space, the trend is toward bigger buildings with larger clear heights for higher vertical stacking and greater use of automation, Monkarsh said. Today’s clear heights range from 32 to 36 feet compared to the 28 and 30 feet heights common a decade ago.

Builders and developers anticipate remaining busy with work for the next one to two years, at least. They expect the commercial real estate market, at a minimum, to remain strong.

“I think it’s going to continue to grow,” Cannito said. “I don’t see any reason why it wouldn’t. For the most part, we’re very positive about where things are headed and how the market seems to be responding.”

However, Nicholson warned, “The market always cycles, and we’re absolutely bound to see another cycle come at some point. But, I don’t think it’s going to be as harsh or as devastating as it was.”