You are here: Home / Press Release Wire / Last Friday Celebrates Its One Year Anniversary and Continues to Support the Community with a Back-To-School Fundraiser 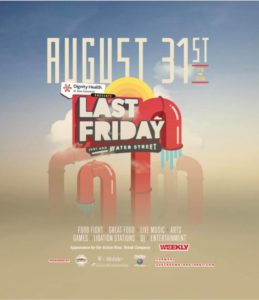 This month, not only will there be one dunk tank, but two. Bring any school donation – backpacks, pencils, pens and more – to try your luck at dunking a member of the Henderson Fire Department or the Henderson Police Department, and win a complimentary donut from Donut Mania.

Join us for this LIVE chef challenge at 6:30 p.m.! Chef Scott Commings and Chef Antonio Nunez, Executive Chefs of The Stove, will help oversee this event and special guests Lorin Bond of 97.1 The Point and TC Martin of the Fox Sports TC Martin Show as our co-emcees!

Local foodies and media notables will be the judges of this tasty battle. Among them, Lindsay Stewart, local Las Vegas foodie and influencer, and Elaine and Scott Harris of Cuisineist and TheDailyMeal NYC.

The live fun alongside art, games, and fantastic foods is sure to make for an unforgettable evening for locals.

As always, general admission to the Last Friday, JAWS Festival is complimentary. Last Friday was founded to resurrect and celebrate the community’s emerging arts and culture and sponsored by The City of Henderson and a few other deep seeded Henderson community driven partners such as the Las Vegas Weekly, Findlay Las Vegas Volkswagen, Lotus Broadcasting, Rod’s Produce Market, Mikuni Harvest, T-Mobile and our newest Presenting Sponsor, Dignity Health Las Vegas.

Incorporated in 1953, Henderson is Nevada’s second largest city with more than 302,000 residents. Henderson is a premier city, nationally recognized for its stunning parks, trails, master-planned communities, outstanding quality of life and patriotic past. Recognized as one of America’s Best Places to Live (MONEY and Liveability.com), one of America’s Best Cities (Business Week), one of the top six safest cities in America (Forbes, InsuranceProviders.com, Law Street Media, Movato.com), and a Bicycle Friendly Community (League of American Bicyclists), Henderson is a progressive and vibrant city committed to maintaining premier amenities and services for all who choose to live, learn, work and play in Henderson… a place to call home.

Last Friday is a community-centric initiative to inspire an ongoing effort between all sectors of Henderson both private and public with the historic Water Street District in the City of Henderson for the betterment of sustainable community growth while giving back. We look to cultivate and create a community driven, family-friendly event that inspires meaningful relationships and opportunities for all. Visit www.justaddwaterstreet.com, www.facebook.com/justaddwaterstreet, Instagram @ LastFridayHenderson, and Twitter @_justaddwaterst #JAWSNV