You are here: Home / Press Release Wire / City of Henderson Looking for Entrepreneurs 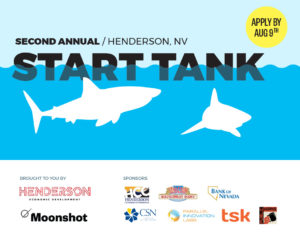 Henderson – The City of Henderson in partnership with Moonshot at the Northern Arizona Center for Entrepreneurship and Technology (NACET) is looking for entrepreneurs with the next great business idea to take the jump into the City’s Shark Tank-style pitch competition. Along with receiving expert advice, contestants will have the chance to win cash and prizes.

Businesses or business concepts proposed by entrepreneurs in the “Start Tank” competition are reviewed by experts who have helped launch dozens of successful ventures. The first phase of the competition will be held in the College of Southern Nevada, Henderson Campus auditorium on Aug. 18 and the event is open to the public. All entrepreneurs participating in the competition will receive counseling and coaching from Moonshot at NACET throughout the event.

Applications must be submitted by Aug. 9 for review where semifinalists will be selected to participate in the initial pitch phase.

“Henderson is filled with innovative thinkers and we’re sure someone out there has the next great idea,” said Barbra Coffee, the City of Henderson’s Director of Economic Development and Tourism. “We want to give these new businesses a stage to perfect their pitch, along with access to experts who can evaluate their businesses and help them grow.”

Applicants for “Start Tank” must create a two-minute video posted to YouTube and complete the online application at hendersonmeansbusiness.com/start-tank. The submissions chosen for the pitch competition and workshop will be announced Aug. 10.

Contestants who pass the first phase will move on to compete for a share of $6,000 in cash and prizes, plus increased exposure for their business or concept during the final pitch competition event Aug. 23.

This year’s finalists in the second annual contest will compete for the top prizes at 4 p.m. Aug. 23 as part of the Henderson Chamber of Commerce Business Expo at Green Valley Ranch Resort. Special guest and keynote presenter for this event is Kiersten Hathcock, CEO/Founder of Mod Mom Furniture and ABC’s Shark Tank winner, season two.

In addition to Moonshot at NACET, the City of Henderson is partnering with the Henderson Chamber of Commerce, Henderson Redevelopment Agency, Bank of Nevada, Parallel Innovation Labs, TSK Architects, Public Works Coffee Bar and the College of Southern Nevada for the competition.

For more information about the competition or Henderson Economic Development, visit HendersonMeansBusiness.com.
###

About City of Henderson: Incorporated in 1953, Henderson is Nevada’s second largest city with more than 310,000 residents. Henderson is a premier city, nationally recognized for its stunning parks, trails, master-planned communities, outstanding quality of life and patriotic past. Recognized as one of America’s Best Places to Live (MONEY: 2012, 2008, 2006 and Liveability.com: 2013), one of America’s Best Cities (Business Week), and being a safe community (Forbes: 2nd safest in 2011, InsuranceProviders.com: 6th in 2012, Law Street Media: 6th in 2013,) and a Bicycle Friendly Community (League of American Bicyclists), Henderson is a progressive and vibrant city committed to maintaining premier amenities and services.

Moonshot at NACET solicits pitches from those ambitious, disruptive innovators whose plans hold commercial possibilities. If accepted, these entrepreneurs and their ideas are put through a rigorous, four-track process that will develop a minimum viable product or an investment-ready business by the program’s end. The program is in the Northern Arizona Center for Entrepreneurship and Technology, which houses a business incubator and accelerator in its state-of-the-art facility with 38,000 square feet with wet labs, suites, offices and manufacturing space.