You are here: Home / Press Release Wire / Last Friday Continues to Build Strength Within the Henderson Community by Hosting Ultimate Arm Wrestling and Heating up Water Street with Our Chef Food Challenge While Giving Back 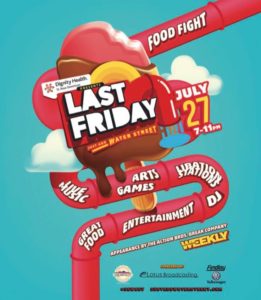 Due to the overwhelming support historic water street received for hosting professional arm wrestling, they’re bringing it back. The professionals are ready to meet local fans and battle it out to benefit Make-A-Wish (http://snv.wish.org/). As part of the American Arm Warriors “We Are Pulling For You” campaign, top-level arm-wrestlers will be on hand to compete, meet members of the community, give tips on training, technique, and grip up with aspiring “pullers” while benefiting the organization.

Starting at 7:30 p.m. and lasting until 9:00 p.m. the arm wrestling professionals will be meeting with members of the community and providing tips on how to succeed in their craft. Immediately following, celebrated and nationally recognized arm-wrestler, Peter Mills will take on Chef Lomeli in an epic arm wrestling battle beginning at 9:00 p.m. following our Chefs Food Challenge.

After 9:00 p.m., the Police will step in to the arena to take on the arm wrestling professionals. Ending the battle of strength and technique will be the King of the Table event in which the crowd chooses their champion and the participant must take on all the previous challenges.

Join us for this LIVE foodie challenge at 7:30pm! Chef Scott Commings (Hell’s Kitchen Winner and Executive Chef at The Stove) will help oversee this event and special guest, Lorin Bond of 97.1 The Point as our co-emcee!

The live fun alongside art, games, and fantastic foods is sure to make for an unforgettable evening for locals.

As always, general admission to the Last Friday, JAWS Festival is complimentary. Last Friday was founded to resurrect and celebrate the community’s emerging arts and culture and sponsored by The City of Henderson and a few other deep seeded Henderson community driven partners such as the Las Vegas Weekly, Findlay Las Vegas Volkswagen, Lotus Broadcasting, Rod’s Produce Market, Mikuni Harvest, T-Mobile and our newest Presenting Sponsor, Dignity Health Las Vegas.