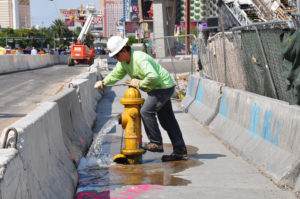 Every year, there are thousands of structure fires in Las Vegas. However, a relatively small percentage of fire-related losses involve commercial structures, in part because of efforts by the Las Vegas Valley Water District (LVVWD) and local property owners to protect their investment.

When most people think about urban fires, they conjure images of the Great Chicago Fire of 1871, which destroyed more than 17,000 buildings, or the San Francisco earthquake and fire of 1906, which razed nearly 500 city blocks. However, anyone who followed the blazes across Sonoma, Los Angeles and northern San Diego, Calif., last year realizes that large-scale structure fires are hardly a relic of the past.

Although non-residential fires have decreased by more than 60 percent during the past four decades, they still pose a risk anywhere fuel can be found. While restaurants represent a greater threat because of flammable equipment and materials used in cooking, electrical systems are always in danger of sparking a conflagration. Considering how many strip malls and multi-story business complexes dot the landscape in Southern Nevada, coupled with windy, dry conditions ready to fan the flames, our community is fortunate to have experienced few multi-structure fires in the past few years.

How much of that is proactive fire prevention rather than simply good fortune? A recent close call involved a November 2017 three-alarm fire near downtown that began as a brush fire but was quickly spread by winds to a towing lot, where it engulfed several vehicles and, further fueled by gasoline, threatened to expand to nearby buildings and fuel tanks. Despite the high density of structures in the immediate vicinity, no buildings were affected. 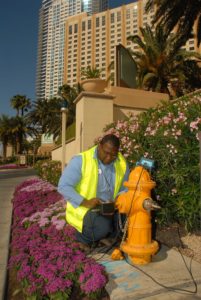 One of the reasons firefighters were able to contain the blaze so quickly was the presence of strategically placed fire hydrants. The LVVWD works with local fire departments to assist in the installation, inspection, repair and replacement of public fire hydrants. Engineered specifically to provide high flow for fire protection, the approximately 40,000 public hydrants—they’re the yellow ones; red hydrants are privately owned—distributed around its 300-plus-square-mile service area are fed by 6-inch water mains, allowing them to deliver up to 1,500 gallons of water a minute exactly where firefighters need it. To ensure they perform when it matters most, the hydrants must be tested annually and maintained. At the LVVWD’s 24/7 Operations Center, technicians can move water around the distribution system as needed to maintain sufficient pressure during fire-fighting events.

Although hydrants rarely need to be replaced—the service life of a well-maintained unit can be 50 years or more—valves can stick and gaskets can leak, wasting water and reducing hydrant performance. To proactively address issues like this, the LVVWD works with the Clark County and City of Las Vegas fire departments to help keep public hydrants working reliably and efficiently. When it is time to cycle a fire hydrant out, doing so is no easy feat. Although small in stature, the typical hydrant weighs more than 400 pounds, requiring heavy equipment to remove and replace.

The greatest threat to hydrants is not neighborhood dogs but rather the vehicularly challenged—five or six times a month, wayward motorists plow over curbside hydrants. Unlike in the movies, however, dislodging a hydrant doesn’t create a geyser—the valve controlling the flow of water through the hydrant is not located inside its housing but well beneath it for precisely that reason.

To avoid interrupting service to residents and businesses during maintenance, the LVVWD maintains isolation valves where each hydrant line joins the water main that feeds it, allowing crews to shut off the supply to the hydrant without inconveniencing adjacent water customers. These valves represent only a small percentage of the hundreds of thousands of valves the LVVWD uses to control the flow of water around the valley.

Effective hydrant maintenance, however, is only half of the equation. The other key to fire protection lies in the buildings themselves, and is the responsibility of the property managers and building owners. Modern building code requires that commercial structures have a built-in fire suppression system to help keep small fires from becoming large ones. Nationally, these systems have contributed to a 20 percent decrease in property losses during the past decade, according to the Insurance Information Institute, helping to save property owners approximately $5 billion. While the costs associated with installing and maintaining these systems are not insignificant, on-site fire suppression systems represent a relatively modest investment in the protection of property and, in many cases, life.

However, as with the fire hydrants for which the LVVWD is responsible, on-site fire suppression systems must be maintained and regularly tested by property owners to assure their effectiveness. Given the infrequency of their use—while one hopes never to use this form of insurance, it is absolutely essential to have it in place—system components can freeze up or fail, rendering it less efficient or, in severe cases, entirely ineffective if not properly managed.

Annual inspections and testing by certified fire safety professionals are intended to confirm that the system is free of corrosion, foreign materials or physical damage. Additionally, they may identify potential obstruction issues, such as when cabinets, shelves or other hardware is installed in a way that inhibits the sprinklers’ ability to function properly. There are also instances in which customers close an on-site valve, inadvertently reducing available fire flow. Property owners or—if allowed by local code—their designee (property management company, tenant, etc.) must maintain records both related to inspections and the systems themselves.

For more information about the LVVWD’s water system, visit lvvwd.com.