You are here: Home / Features / Building Nevada / Balancing the Boom: How Utilities Strive to Keep Up with Developers 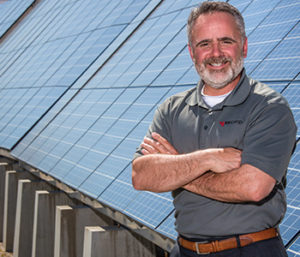 Nevada’s utility providers, facing a wave of requests from developers who need water, power and natural gas service for their projects, increasingly rely on digital solutions to help move applications along.

At the same time, utilities emphasize one of the oldest strategies in the book to reduce the possibilities of delay. They encourage development teams to meet face-to-face with utility engineering staffs as early in the process as possible. Problems often can be solved easily if they’re identified early, utility engineers say. Problems that crop up later may require expensive, lengthy solutions.

Utility providers say they’re busy these days with requests for service from developers in Las Vegas, Reno and outlying areas, and developers universally want to get their projects moving quickly.

“It’s busy on both ends of the state, and everyone is in a hurry nowadays,” said Jeff Brigger, director of business development in the economic development unit of NV Energy. NV Energy has added staff and, what Brigger called, “a significant amount of contractor resources” to handle the upsurge.

“Many times developers ask if we need to just hire more people to satisfy all the work. They are understanding when I explain that, in many areas, employees already work extended days and weekends in addition to the high volume of work that’s contracted out,” he said.

It’s not just new projects creating more work for employees of the state’s largest electric utility. Pressure also comes from shifts in the way power is generated and distributed.

In the next year, for instance, NV Energy will add three engineers, as well as new planning techniques, to strengthen its analysis of the growing use of distributed energy resources on its grid. Distributed energy resources — which range from energy-efficiency systems to solar generation — often are proposed by developers seeking to capture incentives as well as long-term savings in utility costs.

Despite the surge of applications that’s accompanying new development, Meade said the water district staff is able to meet those standards.

Technology helps. The district’s engineering submissions are digitized, allowing for multiple reviews which can be conducted simultaneously. No longer does one review await the completion of another.

A results-oriented management philosophy helps, too.

“Our staff is empowered to get things done,” explained Meade. “They stay in touch with the developers’ engineers in real time to resolve questions quickly.”

Among the ways developers and their engineers can move projects through the process quickly is investment of time early in the process.

“We strongly encourage a pre-submittal meeting,” said Meade. That meeting gets water district staff up to speed on a proposal and allows potential problems to be identified and resolved before the application itself is submitted.

Information about sanitary sewers and storm sewers on the site are particularly critical, the water district engineering chief says. That information will influence decisions about water service. Failure to provide that information up front might mean that a water service plan has to be reworked later on.

In some cases, Meade said, meetings with water district staff members even earlier can pay benefits.

In fact, a developer looking at a piece of land, no matter how small, might want to talk with district engineers about potential water service issues long before closing on the purchase. An urban redevelopment site, for instance, might provide limited space for the installation of water-related infrastructure, and those questions may need to be resolved before the purchase is completed.

Valley Electric Association (VEA), the Pahrump-based cooperative that serves more than 6,800 square miles in Southern Nevada and small parts of California, also seeks to meet as early as possible with developers, said Ramon Abueg, the cooperative’s chief operating officer. That way VEA staff can work with the developer to create conceptual plans to serve the development.

In that process, the architect for the developer defines the requirements for electric service and estimates the property’s consumption of electricity. From there, Abueg explained, VEA’s engineering staff can design the service infrastructure — the transformers, cables, electric panels — needed to get electric service to the property.

The costs vary, depending on the amount of infrastructure the cooperative needs to build and the distance of the property from existing power lines. One cost, however, is small. Applicants pay $10 to become a member of the cooperative.

“Common stumbling blocks could be incomplete applications or, in some instances, being unable to execute right-of-way easements from adjacent properties,” said Abueg.

By getting an early start, VEA can meet its goal of completing energy infrastructure before the developer’s go-live schedule, added Abueg.

Brigger added that early meetings with developers sometimes create opportunities to improve the marketability of new real estate projects. For instance, utility executives often provide information about financial incentives for energy efficiency and use of renewable energy sources to developers — information that developers can share with the companies that are the end users of new buildings.

“We can help developers close deals with their customers,” Brigger says. “We want to be a strong partner with the development community.”

In its initial discovery sessions, NV Energy works with developers to get an overview of the project and its energy requirements. The utility also provides materials that detail application and construction requirements.

“That initial conversation is vital for us to understand the scope of the project and the project’s timeline,” says Brigger.

For all of the good intentions of utility providers, the complexity of the approvals process sometimes leaves developers waiting.

“We are responsible only for a small part of this. There are a lot of utilities and agencies involved,” said Scott Estes, director of systems planning and engineering for Truckee Meadows Water Authority (TMWA), which serves the Reno-Sparks metropolitan area.

TMWA’s agreement to provide water is necessary before the Washoe Health District will give its approval to a building permit application. Estes explained that, because of this, savvy developers get water service in place before they file for a building permit. That doesn’t always happen and some building permits get hung up as a result.

TMWA’s goal is 30-day turnaround of at least three-quarters of the applications it receives, and 60-day turnaround on all applications. (“Turnaround” is the time between the receipt of a completed application for new construction and review of engineering documents.) Despite the upsurge in development, TMWA has managed to maintain an approximately 10-day turnaround, Estes said.

When developers begin working with TMWA, they pay a $300 application fee as well as fees to cover the costs of engineering and health department reviews, inspections and installation of meters. Developers also face a set of connection fees designed to ensure that the demands of growth pay their own way. Those fees, Estes said, help recoup the costs of the water treatment, storage and delivery infrastructure that’s needed to serve new development.

For developers in the Reno-Sparks area, however, the costs and paperwork involved with an application for TMWA service is only a small part of the process of getting water service to a project. The purchase of water rights is a bigger requirement.

A court decree in 1944 established the number of water rights available in the Truckee River system. No new water rights can be created.

That means a developer must purchase water rights for a project on the open market, often buying water rights that once served agricultural land and converting them for use in urban developments.

At last count, about 45,000 acre-feet of water — enough to serve roughly 90,000 homes — remain to be converted from agricultural to urban uses in the Truckee River area.

The price of water rights sold on the open market in Northern Nevada varies widely, depending on the type of rights and their limitations, explained Chris Facque, water rights manager at Farr West Engineering in Reno.

The cost of water rights themselves is only part of the equation, Facque notes. Developers need to factor in time — and the costs related to time — to ensure water rights are properly permitted.

The most important factor in speeding applications along, utility executives say, is careful attention to application details and the underlying rules. Even a few square feet of inappropriately placed grass can slow things down.

Las Vegas Water District engineers, for instance, encourage residential developers to pay close attention to their planned use of turf in common areas. While a limited amount of turf is allowed in community spaces where it can be used for recreation, the district’s engineers often encounter plans that include turf on medians in the middle of busy streets — hardly a place for children to play. If turf isn’t used appropriately, developers face delays to redraw plans — and new construction reaches the market more slowly.