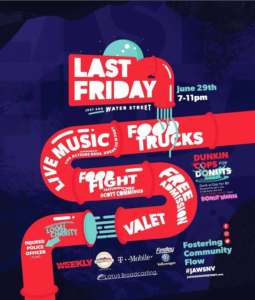 Mark your Community Calendar for Friday, June 29th, where Last Friday Continues to Foster Community Growth by Donating 100% of Proceeds to the Injured Police Officers Fund. Come Hungry, Thirsty, and Ready to Dunk an Officer!

Local artist, Juan Muniz, a fan favorite for creating a cast of wildly popular characters for the Vegas Golden Knights called the Golden Misfits. These creations are now being used on official merchandise such as hats, hockey pucks, t-shorts etc. Juan Muniz is a toy designer, muralist and fine artist with an art career spanning over 15 years. He has shown his unique style of art – a mixture of pop art, pop surrealism, animation and lowbrow – in galleries from prestigious locales such as Las Vegas, Los Angeles, New York, Japan, San Francisco, and Taipei. Juan Muniz has also successfully taken his talents and art career beyond the traditional art gallery using street art, apparel and toys. Universally known organizations such as the NBA, UFC, Hard Rock Hotel/Cafe, Cosmopolitan Hotel, Zappos, Don Julio Tequila, Pepsi, and The Sugar Factory to name a few, have enlisted his creative talents for branding and artistic imagery. Juan will be creating a live mural to auction benefitting the Injured Police Officers Fund.

Last Friday, JAWS Festival is complimentary and will take place on Friday, June 29th, 2018 from 7:00 p.m. until 11:00 p.m. at the historic Water Street District located in Downtown Henderson. Last Friday was founded to resurrect and celebrate the community’s emerging arts and culture (www.justaddwaterstreet.com).

Take your chance at dunking a police officer! For a $1 donation, you can dunk a cop and get a free Donut Mania doughnut. In honor of firefighters and police officers, we are raising money to support the IPOF (Inured Police Officer’s Fund.) A dunk tank will be brought to Water Street District for Last Friday, this Friday night. Every time an officer is dunked, the lights on the patrol car next to the dunk tank will go off as we salute raising money for the IPOF.

The celebrated Chef Foodie Challenge will continue to kick off at 8:15 p.m., hosted by celebrity Chef Scott Commings, winner of Fox’s Season 12, Hell’s Kitchen and proud Henderson resident. Co-emcee is Lorrin Bond, deejay for Lotus Broadcasting’s 97.1, The Point, #1 for Classic Rock from 2 p.m. to 7 p.m.

Get ready for the ultimate Foodie Challenge between Chef Nelson Berrios, Chef de Cuisine at Mercato Della Pescheria located at The Venetian and The Palazzo overlooking St Mark’s Square vs. Chef Harold Norris, Assistant Executive Chef at Café Americano located at Caesars Palace Hotel. This food challenge takes on a very personal meaning as both chefs fall under the culinary umbrella of V&E Restaurant Group, so the competition is fierce, yet friendly. The foodie challenge is a secret list of foods used to prepare one to three items which will then be judged by a mix of local media, food writers and influencers beginning at 8:15 p.m. The chefs will then have 45 minutes to create original dishes to be judged on taste, presentation and originality.

This month’s judges are media notables. Judges for Last Friday include Brock Radke, editor-at-large for the Las Vegas Sun, Las Vegas Weekly and Las Vegas Magazine also Podcast Host and Creator of All the Vegas.

The second judge is Samantha Thomas. Samantha Thomas is an Emmy Award Winning Journalist and Talk Show Host. She is the Creator, and Executive Producer of SmallTALK with Samantha, a Lifestyle Talk Show airing monthly on Vegas PBS (Channel 110). She received her degree in Journalism from Lincoln University of Missouri and has worked as a TV News producer in markets across the U.S. including, Missouri (CBS), Las Vegas (FOX & CBS), and her hometown of Chicago (CBS & WGN).
Samantha hopes her talk show will not only touch her demographic of Women, but others with a message of hope. She lives by the motto, “If you can Dream It, you can Achieve It.”

The third judge is Jolene Mannina, VP of Culinary Relationships and Chairman of the Advisory Board for Urban Seed. Jolene has been in the hospitality industry for 18+ years. From a captain at Commanders Palace in New Orleans to the creator of culinary events and TV show Late Night Chef Fight on A&E’s FYI Channel. With 18 years of experience under her belt Jolene’s event management company Relish LLC quickly became the go to resource for all things food and beverage in the budding festival world. As Head of Culinary for the inaugural Life is Beautiful Festival in downtown Las Vegas to a long list of other events and festivals like Further Future. Jolene has brought her unique tenacity and ability to foresee needs to create distinct experiences. Now as the VP of Culinary Partnerships and Chairman of the Advisory Board Jolene will be growing Urban Seeds relationships with the visionaries that drive the hospitality industry.

As always, general admission to the Last Friday, JAWS Festival is complimentary. Last Friday was founded to resurrect and celebrate the community’s emerging arts and culture and sponsored by The City of Henderson and a few other deep seeded Henderson community driven partners such as the Las Vegas Weekly, Findlay Las Vegas Volkswagen, Lotus Broadcasting, Rod’s Produce Market, Mikuni Harvest and T-Mobile.