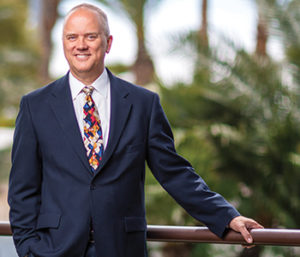 Both the Las Vegas and Reno commercial real estate markets are well balanced and healthy for the foreseeable future, but there may be trouble past the horizon.

Real estate professionals in both cities echoed similar statements in regard to the health of the markets, but Providence Commercial Managing Partner Mike Montandon said a land shortage could loom in Las Vegas. Montandon said, as of now, there are plenty of choices if a client comes looking for 20 acres, but as the Valley fills up, those plots will dry up.

“There’s still a fair amount of land available,” Montandon said. “But it’s fairly easy to see in three years there will be a shortage. Most homebuilders aren’t looking three years ahead, they’re just 18 to 24 months out, so it’s not causing a panic today.”

With the Las Vegas metro area’s sprawl nearing greater elevation gains, Montandon said the infrastructure costs to outfit the potential land coming online for development could prohibit further growth. Should Las Vegas continue to see the population growth of the past decades, the city will need to become more dense, Montandon said.

“Right now, we’re still a western city,” he said. “If you wanted to buy a home in Boston, it’d be a brownstone or a condo. Here, we’re flabbergasted if a home doesn’t have room for a swimming pool.”

Reno is experiencing a similar diversification of the economy and a growing population, which has led to an equally healthy market, said Tom Fennell, principal at Dickson Commercial.

In Reno, the highest performing segment of the real estate industry continues to be industrial, with plenty of new development and a vacancy of less than 4 percent. Fennell said there was a 90 percent increase in industrial transaction volume last year, resulting in $467 million in sales in 2017 as compared to $245 million the year before.

“There’s a lot of new companies moving to the area,” he said. “Then there’s the private equity and institutional investments. There’s a huge demand in Nevada for industrial.”

Fennell said multi-family is also doing well in Reno, with more than 3,700 units under construction and 6,800 units planned.

Industrial real estate continues to be the strongest segment in Las Vegas as well, said Michael Dunn, the Southern Nevada managing principal at Cushman & Wakefield. Depending which company’s set of statistics are believed, Dunn said industrial vacancy in Las Vegas is somewhere between 3.5 and 4.5 percent, with North Las Vegas gaining new developments due to the land shortage in the southwest and airport submarkets. The demand and supply remains in balance of large developers for big box projects and e-commerce distribution, Dunn added.

“It’s an interesting time and we’ll continue to see out-migration from California,” Dunn said. “They keep raising taxes and affordability for their employees is not an easy situation, so the neighboring states will all benefit from California’s cost structure. I anticipate that continues and in turn we’ll get our piece of the pie and continue to diversify.”

The weakest real estate segment in Las Vegas is office. However, it is extremely healthy compared to a decade ago. “At the very bottom [of the market], there was a 30 percent vacancy and now we’re down to 13 to 14 percent range in certain submarkets,” Dunn said. “What product is available isn’t in large chunks, so larger users have a challenge and we don’t have a lot of prominent office developers with large land holdings, so we’re not seeing a lot of products.”

There is a six-story office building under construction in Downtown Summerlin and a few other buildings in the area are in pre-leasing, but Dunn said construction is making rental prices higher than the ideal rate.

As companies continue to look at Nevada and other states as a landing spot as they leave California, a predicament could arise in the near future.

“With the industrial and office market moving forward, at some point the demand will outpace the supply and it’s how do we fill that void to continue to grow as an economy?” Dunn said. “If someone comes from out of state to find a facility and we don’t have one, that’s a problem. There are opportunities out there and now it’s wondering who will step to take the risk and fulfill them.”

Fennell said office, along with retail, in Reno is also performing well, but more modestly than industrial and multi-family. Construction on the city’s first speculative office building in more than a decade continues, a 40,000 square foot building by McKenzie Properties. Reno could also benefit from some of the industrial companies moving office jobs to the area, Fennell said.

Fennell said economic projections in 2015 suggested a lofty goal of 50,000 new jobs in five years. The past two years Reno has added 10,000 jobs annually, but now it’s time to further diversify the city’s economy, he said.

“We grew so rapidly with the advanced manufacturing, data centers and distribution, we’re trying to focus and balance that out and bring true software side jobs,” Fennell said. “That would help the office market.”

Through her work in investment sales, Sun Commercial CEO Cathy Jones talks to a lot of property owners and brokers, and they’re all saying the same thing.

Jones said lately there are a lot of buyers looking for stabilized properties in Las Vegas. Not too long ago, Jones said buyers were more interested in value-add properties.

“They’re still there,” she said of the value-add buyers. “But we also now have buyers comfortable coming in for more stabilized properties. That’s really refreshing.”

“There have been some nice assets sold for decent prices,” he said. “So things are positive and healthy from that standpoint.”

Jones said there’s bound to be some office product before too long that is rendered somewhat obsolete, but tenants are stable in the office market.

“We’ll see new spec product before some of the really old properties get filled,” she said.

Buyers continue to largely come from out-of-state, Jones said.“California is always the biggest pool,” she said. “But in the last 12 months we’ve seen a broader base of buyers. We’re dealing with more buyers from the East Coast and we’ve seen Canadian buyers.”

The increasing diversification of the Las Vegas economy and the nationwide market visibility with the National Hockey League’s Vegas Golden Knights and National Football League’s Raiders will continue to bring interested parties to town, Jones added.

“The general perception of buyers from outside the state looking at Nevada is so much more positive now,” she said. “It’s almost as though it’s thought of as a traditional community now.”

As retail continues to move to the internet and brick and mortar closings make headlines, Dunn remains optimistic for the future of physical retail spaces.

“I have two retail teams and they seem very busy,” he said. “There’s a lot of infilling and inline space in neighborhoods and power centers that seem to be active.”

Regional malls in Las Vegas haven’t been majorly impacted like some areas in the U.S. and there is still retail development where housing is continuing to pop up.

Montandon said he sees traditional retailing going away fairly soon, with future stores needing to fill specific niches as Amazon and other e-retailers fill the commodity needs. The major movers in the retail segment according to Montandon are “ultra convenience.”

“List the gas station convenience stores and each one is looking to buy 10 sites right now,” he said. “Those and things you can’t ship like liquor and firearms, they’ll always be in retail stores. More traditional properties such as power centers and things like Best Buy and sporting good stores, those will be things of the past.”

Rather than concerns moving forward, Fennell said there are challenges the region must address to continue to see a growing and healthy real estate industry.

Primarily, Fennell said housing affordability, like in many communities across the United States, will be an issue. To help curb costs, it will be important to address the education system, he said.

Dunn said Las Vegas also needs to focus on its education systems to ensure a growing workforce of qualified employees to continue to attract new companies.

Unlike before the Great Recession, Fennell said the Reno community isn’t ignoring the issues, but is instead attacking them head on before they have a disastrous effect.

“We want to make sure we don’t fumble what we’ve been fortunate to get as a region in terms of a recovery,” Fennell said. “We have so many positives and the perception of Reno has taken a 180 from what Reno was to what it is now.” The new economic diversification and reputation, along with the still fresh memories of the recession, makes Fennell confident the area will sustain growth, even through an eventual pullback.

A red hot market can be cause for concern and an overheated market can lead to a slow down, but Jones is optimistic the continued constraint from lenders will help curb enthusiasm and keep momentum stable. Along with spreading too thin and running out of land, Montandon is watching carefully for an imbalance in supply and demand in housing. He doesn’t see trouble now, but said reports suggest the Valley is short on used homes, which with a spike of new homes, could cause a slightly troubling imbalance.

Despite his long-term concerns, Montandon is happy with the healthy market. “The concerns are just to be watched for,” he said. “I don’t see anything immediate to cause any concern.”