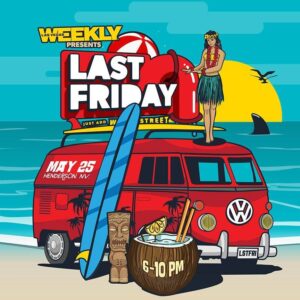 Last Friday is Pulling for the Troops with The Ultimate Arm-wrestling League! Six Super Matches featuring State Champions and Nationally Ranked Contestants Up Close and Personal.

HENDERSON – This month’s Last Friday, Just Add Water Street theme continues with activities for all ages and exciting activations from food, to music and competitive strength activations throughout the event. Last Friday, JAWS Festival is complimentary and will take place on Friday, May 25, 2018 from 6:00 p.m. until 10:00 p.m. at the historic Water Street District located in Downtown Henderson. Last Friday was founded to resurrect and celebrate the community’s emerging arts and culture (www.justaddwaterstreet.com).

The first time to ever descend on historic Water Street is professional arm-wrestling. The professionals are ready to meet local fans and battle it out to benefit the Gary Sinise Foundation (https://donate.garysinisefoundation.org/PullingfortheTROOPS). As part of the American Arm Warriors “We Are Pulling For You” campaign, top-level arm-wrestlers will be on hand to compete, meet members of the community, give tips on training, technique, and grip up with aspiring “pullers.”

“Everyone has arm-wrestled at least once in their lives, but to feel the power of a Professional Arm-wrestler is something completely different. You have to grip up with them to believe it, and I promise you, there is nothing like a handshake from an elite arm-wrestler in terms of a one-of-a-kind experience” says, Peter Mills, National Champion and main event feature contender.

The best in the Southwestern United States will be participating in meet-and-greet opportunities, strength displays and a workshop on the sport before competition begins. The Main event begins at 7:00 p.m. with two Title Belts to be awarded; The American Arm Warriors Super Heavy Weight Belt and Light Weight Belt. Each match is best out of six rounds. A special Ladies Match featuring two nationally ranked women is also taking place in addition to six other state and nationally ranked arm-wrestlers.

The celebrated Chef Foodie Challenge will continue to kick off at 6:45 p.m., hosted by celebrity chef Scott Commings, winner of Fox’s Season 12, Hell’s Kitchen and proud Henderson resident. Co-emcee is TC Martin of the TC Martin Show (https://www.tcmartinshow.com/) on FOX Sports 98.9FM and 1340AM.

Two reigning chefs from last year’s Foodie Challenges are competing, chef Stephen Hopcraft, Executive Chef at STK Las Vegas located at The Cosmopolitan of Las Vegas vs. chef Robert Lomeli, Executive Chef at Hecho en Vegas located at The MGM Grand. The foodie challenge is a secret list of foods used to prepare 1 to 3 items that will then be judged by a mix of local media, food writers and influencers. The confirmed foodie judges for this month are Spirt of Nevada’s, Samantha Chian, Nevada Governor Candidate, Stephanie Carlisle and Jamal Parker, Publisher of Las Vegas Magazine & Vegas2Go at Greenspun Media Group.

The live fun gets even more exciting with the Foodie Challenge kicking off at 6:30 p.m. with local celebrated Executive Chefs donating their time and talent to this community event.

Other activations include a live deejay, food trucks, adult libations, artists, crafts, retail pop-ups, kid’s activations, and much more! Live music will be performed by the band Rock n’ Blues beginning at 7:30 p.m.

As always, general admission to the Last Friday, JAWS Festival is complimentary. Last Friday was founded to resurrect and celebrate the community’s emerging arts and culture and sponsored by The City of Henderson and a few other deep seeded Henderson community driven partners such as the Las Vegas Weekly, Findlay Las Vegas Volkswagen, Lotus Broadcasting, Rod’s Produce Market, Mikuni Harvest and T-Mobile.