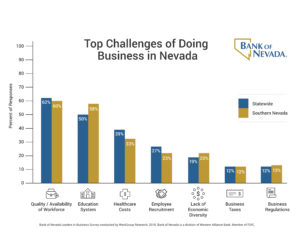 LAS VEGAS – Business leaders around the state believe there are many good reasons to do business in Nevada, but the state’s favorable tax structure was cited by most as the top business benefit, according to the Bank of Nevada Leaders in Business Survey. Business leaders continue to cite quality and availability of workforce as the No.1 challenge for Nevada businesses.

For the second year in a row, Bank of Nevada and First Independent Bank, both divisions of Western Alliance Bank, asked business leaders to identify the challenges, benefits and issues that are important to the state’s business community. The Nevada Leaders in Business Survey was conducted by WestGroup Research between February 6 and March 2, 2018. More than 120 business leaders provided their opinions, representing companies of all revenue and employee sizes.

“While Southern Nevada’s business climate is allowing many companies to thrive, it’s important we understand the issues that could be holding our state back from attaining even more success,” said John Guedry, CEO, Bank of Nevada. “In that regard, the Nevada Leaders in Business Survey is an extremely important tool to provide insight into the challenges faced by businesses operating in our state.”

The 2018 survey found stronger feelings about some of the challenges faced by Nevada businesses, when compared to last year’s results. The majority (62%) cited concerns about the quality and availability of workforce. That’s up from 51 percent in last year’s survey. The education system remained the second (50%) most often cited challenge—the same as last year. Healthcare costs came in third (39%) up slightly from last year’s 37 percent, followed by employee recruitment (27%) up from 21 percent in 2017. Business taxes and business regulations were each recognized by 12 percent of respondents, which is a significant decline- this may be due to passage of the Tax Cuts and Jobs Act of 2017, and the current administration’s regulatory pullback.

Statewide, respondents saw many benefits of doing business in Nevada, but the favorable tax structure was cited by most (65%) as the greatest benefit. This is a significant increase from last year’s survey when 51 percent chose it. Nevada’s climate/weather was second with 51 percent, followed by quality of life (42%), low cost of doing business (41%), proximity to customers (27%), entrepreneurial mindset (25%) and top convention destination (7%).

Among Southern Nevada respondents, favorable tax structure (68%) and climate/weather (56%) also topped the list (below). However, Southern Nevadans believe the area’s low cost of doing business (43%) is more of a benefit than quality of life (32%) compared to statewide results. Entrepreneurial mindset (29%), proximity to customers (26%), and top convention destination (10%) also rated slightly higher in Southern Nevada than statewide.

Business leaders around the state were asked which action or condition would have the most positive impact on Nevada. The majority (62%) said increasing the pool of STEM graduates, followed by enhancing Nevada’s image (59%) and increasing access to capital (33%). Statewide and Southern Nevada results mirrored one another, with Southern Nevada responses roughly five points higher in each category.

Southern Nevada respondents believe state government could improve the business climate by increasing K-12 education funding. This was the top response with 52 percent naming it.

Similar to last year’s survey results, Nevada’s business leaders give the state’s workforce high marks for a number of strengths, including willingness to learn (62%), adaptability/flexibility (43%), teamwork (40%) and multicultural sensitivity (34%).

There is agreement among those surveyed on the weaknesses within Nevada’s labor pool. Every category increased significantly over last year’s results, some by as much as 20 points. Problem solving (52%), math and science skills (52%), self-motivation (48%), leadership (48%) and communication skills (47%) were identified as the top weaknesses among the state’s labor pool.

Among Southern Nevada responses, some labor pool weaknesses were identified by a greater percentage than statewide, including problem solving (56%), math and science skills (58%), and leadership (55%)

The vast majority (87%) of business leaders are very/somewhat confident their company’s revenue will grow over the next year, with seven in 10 (69%) businesses agreeing there are more growth opportunities for their company today than there were three years ago.

To download a copy of all survey results, please go to: www.bankofnevada.com/survey2018

About Bank of Nevada

Bank of Nevada is a division of Western Alliance Bank, Member FDIC, the go-to bank for business in its growing markets. Founded in 1994, Bank of Nevada offers a full spectrum of deposit, lending, treasury management, international banking and online banking products and services, plus superior service to meet the needs of local businesses. With 10 offices in Las Vegas, Henderson, North Las Vegas and Mesquite, along with Western Alliance Bank’s robust national platform of specialized financial services, the banking division is a valued partner for Southern Nevada’s business, real estate, professional, municipal and nonprofit communities. Western Alliance Bank is the primary subsidiary of Phoenix-based Western Alliance Bancorporation. One of the country’s top-performing banking companies, Western Alliance ranks #2 on the Forbes 2018 “Best Banks in America” list. For more information, visit bankofnevada.com.