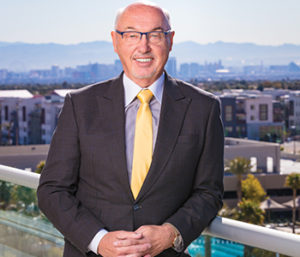 It’s a simple law of Nevada economics: When folks are working, they buy houses. And when they’re making good money, they buy better houses. Those economics are driving stronger residential sales and construction across the state, and executives see little reason for worry about the continued health of the residential sector.

Employers added 37,700 positions statewide during the 12 months beginning in January 2017, and the strong job growth powers residential sales across Nevada. In Clark County, home brokers sold 2,261 single-family homes during the often-slow month of January. That’s a 5.5 percent increase in sales from a year earlier.

Observers who dug a little deeper into the Greater Las Vegas Association of Realtors (GLVAR) statistics noted a more telling figure about the market. The inventory of existing homes on the market at the end of January was more than 25 percent lower than the inventory at the same time a year earlier, and average sale prices had risen by nearly 19 percent.

Orrock noted that six major projects totaling some $10 billion will reshape the face of the Strip during the next few years — and create thousands of jobs at the same time. The development of Las Vegas as a sports designation with the arrival of the NFL’s Raiders, the success of hockey’s Vegas Golden Knights and the construction of a $150 million stadium at Summerlin for the baseball’s AAA Las Vegas 51s provides further support for the housing market.

Ivan Sher, owner of The Sher Group at Berkshire Hathaway HomeServices Nevada Properties, said no one should underestimate the effects of the sports teams. The development of a sports segment, he said, is drawing all sorts of well-paid sports industry professionals to Las Vegas.

The job growth and migration figures send a clear signal to builders and developers, and they’re responding.

“We’re still off from a normalized market, but we’re headed in the right direction,” explained Orrock.

Summerlin saw more than 1,000 residential sales in 2017 — the first time that the benchmark has been crossed since 2006.

While demand is strong across all price points in both Las Vegas and Reno, sales of luxury homes have rebounded noticeably.

In the Reno area, the Northern Nevada Multiple Listing Service (MLS) reported that 144 homes priced at $1 million or more were sold in the market during 2017 — a 52 percent increase from a year earlier. The average sales price in the luxury segment rose by nearly 9 percent during 2017, the MLS reported.

Among the factors strengthening the luxury home market statewide is the new federal tax law with its limitation on the deductibility of state and local income taxes. California residents calculate the true cost of the state and local taxes they pay now that deductibility is limited. Many are beginning to realize it’s time to move to tax-friendly Nevada, said Monica Gore, a broker with Dickson Realty who specializes in the luxury Montreux neighborhood at the edge of the Sierra Foothills. Gore said the inventory of existing homes for sale in the neighborhood recently stood at nine — less than half the usual inventory of 20 or 25 homes.

“We’ve seen a dramatic increase in activity with the new tax law,” Gore said. “The phone has been ringing off the hook.”

Demand is driven further by the strong economy of Northern Nevada, which creates a strong market of move-up buyers. And, Gore notes that a booming stock market always injects a shot of confidence into the market for luxury homes.

In the Las Vegas area, a combination of factors drives the market for custom-designed, custom-built luxury homes. Dan Coletti, owner of Sun West Custom Homes in Las Vegas, said potential buyers are well aware that interest rates remain at historic lows and they realize they are able to get financing at attractive rates.

Another factor driving the market, business owners and executives who buy luxury homes feel strongly optimistic about the direction of the economy, both nationally and in Nevada. Sher said many potential buyers who were hard hit during the recession now have rebuilt their fortunes and are looking for new luxury homes.

Finally, the influx of Californians — including many who represent a level of extreme wealth seldom seen in Las Vegas in the past — provides a steady stream of potential buyers. Those buyers have done their homework online, Sher said, they arrive with a list of the properties they want to see, and they’re ready to move quickly.

The stronger activity brings new problems for residential builders that were starved for work a few years ago. Among their biggest headache is finding skilled workers.

Hundreds of baby boomers are retiring from the construction trades, and the industry lost a generation of potential workers during the recession. Limited numbers of foreign workers — especially from Mexico — are allowed under the H2B temporary visa program for non-agriculture workers.

The labor shortage is so severe that SNHBA assigned one full-time staff member to spread the word among high school students, returning veterans, even recently released prison inmates, that home construction is a good job.

“We could use a couple thousand workers right now,” said Hodgson. “We need people to build homes.”

However, effects of the labor shortage are uneven. Coletti, for instance, said tight supplies of labor haven’t yet pinched Sun West Custom Homes because of the relationships with subcontractors the company developed during its 30-year history. Because Sun West still was building during the recession, subcontractors today give Sun West projects priority.

“We have a deep pool of subcontractors who have been loyal to us,” Coletti said.

While labor costs are a big worry, home builders feel other price pressures as well. Reconstruction of the Gulf Coast after last autumn’s hurricanes pushes up prices for drywall. Forest fires in Canada and hefty duties on imports of Canadian softwood into the United States pressure lumber prices.

Those impacts are felt particularly sharply in the entry-level residential market, where every couple of hundred dollars in selling price means a few more families won’t qualify for a loan. But, on the upper end of the market, labor and materials costs — costs that might add something like $50,000 to the cost of a $1.4 million home — are far less of an issue, Gore said.

Sharply rising land costs also put upward pressure on residential prices in Las Vegas, where the federal government owns most of the land surrounding the city. Land that was selling for $100,000 a couple of years ago now sells for as much $500,000 an acre, said Hodgson.

“We’re at the table a lot, but usually we’re there to play defense,” said Hodgson.

For all the attention paid by Wall Street to recent upticks in interest rates, builders and developers see little impact.

“A lot of our luxury buyers are not affected by a change in interest rates of a quarter or half a percentage point,” said Coletti.

Besides, Orrock adds, rates aren’t an issue at all for the growing number of cash buyers in the residential market. Whether luxury home buyers are paying cash or getting a mortgage, they’re looking for homes that are different today than the homes built 20 years ago.

Coletti, whose company is unusual in its combination of architecture, interior design and construction under one roof, said many clients today are looking for larger, more elaborate master bath suites and master closets in luxury custom homes.

Another trend is buyers wanting a contemporary look, but one that won’t grow dated with passing years. Coletti’s firm showcases a contemporary show home, Waters Edge at MacDonald Highland, that draws a steady stream of potential buyers to the Henderson property six days a week.

“Everyone loves to see a lovely $7 million home,” said Coletti.

Sher noted, meanwhile, that buyers of new luxury homes are more architecturally sophisticated today, and many buyers are looking for exceptionally fine finishes and high-quality touches rather than large rooms in big houses. “We now have the most interesting architecture I’ve seen in this city,” he said.

Montreux, which surrounds a Jack Nicklaus Signature Championship golf course at the southwest edge of Reno, has seen construction of about 350 homes on its 540 available sites since work began 20 years ago.

While much of the recent construction has been driven by lack of available homes for luxury buyers — including a number of Silicon Valley families who are buying a luxury home in Reno at the same time that they purchase a vacation place at nearby Lake Tahoe — Gore said new construction also meets the needs of buyers with changing lifestyles. For instance, she said that single-story floor plans are increasingly popular with empty-nesters who want ease of access as they grow older and their knees stiffen.

Even as they deliver homes for today’s buyers, builders pay close attention to the market they’ll face a couple of years from now.

“In this business, you have to anticipate. You can’t turn on a dime if the market accelerates or decelerates. Builders need to be looking two years out,” said Orrock.

Fortunately, most builders’ forecasts are rosy.

“The future is very bright on both ends of the state,” Orrock said. “It’s unbelievable what is happening with all the job growth, the diversification and the new industries that are coming to Nevada.”