You are here: Home / Features / Feature Story / The Communications Landscape: Connectivity in Nevada 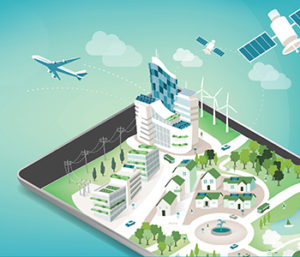 Nevada companies want to be more efficient, expedient and cost effective, and so, they’re demanding more and more out of the available technologies for communicating. Firms providing those continue to develop and offer related products and services that enhance businesses’ connectivity to not only people but, also, objects.

“It’s a brave new world,” said Jace Barbin, the vice president of national business-west at AT&T Business. “Business is morphing as we get better at the technology. Customer adoption of technology is probably at an all-time high. People are realizing if they don’t adopt and make sure their businesses are nimble and fast, they’re not going to be around.” AT&T is a telecommunications company providing mobile and fixed phone, entertainment, television, wireless, Internet and other services.

Companies want to be connected at all times. They want service to be available always; they want to be able to communicate via calls, texts, e-mails, file transfer, video and more at any time anywhere.

They want the technology to work seamlessly and constantly both indoors and outdoors and while moving in between and while on the go. That means no dropped calls, no degradation of service due to, say, numerous people on a network and no interrupted service due to, for instance, a natural disaster. They want communication in both directions between those at home base and those moving around in the field.

“There’s a huge demand for being constantly connected. Businesses need to stay connected wherever they go. If I miss a call or e-mail, I could miss out on revenue or the ability to create a good customer experience—that’s what businesses are thinking,” said Janson Dupre, the director of business sales for Nevada and Central and Northern California at Verizon Wireless, a telecommunications company that offers wireless services and products.

Companies want immediacy and, therefore, fast data speeds. They don’t want their videoconference to buffer or their file uploads and downloads to take time, for example.

Today, the smartphone is “the most common” communications device for companies, Dupre said. And 4G LTE is the current wireless technology. 4G means it’s the fourth generation of broadband cellular network technology, and LTE is a type of 4G delivering the fastest connection for the Internet.

A growing business trend is communicating with objects via the Internet of Things (IoT). The IoT is a network of Internet-connected objects—cars, thermostats, lights, sprinklers and more—able to collect and exchange data using embedded sensors, software and other electronics and technology. Companies increasingly are utilizing this connective technology to maximize efficiency, save money and time, and enhance their brand, Dupre said.

Business owners can program these smart devices to do various tasks. For example, they can have remote cameras, say at a construction site or a satellite location, notify them in real time of any activity. They can have lights and the heat or air conditioning in an office engage or turn off at a certain time or on detection of motion or the lack of it. They can have exterior lights in a parking lot or other spot turn on or off or dim at certain times.

However, IoT capabilities extend beyond on/off controls. An increasingly popular one is tracking company vehicles and their drivers. Verizon and AT&T offer products for this, Telematics and Fleet Complete, respectively. With the requisite technology installed in a vehicle, someone in a remote location, the office for instance, can monitor where it is at all times. They could also monitor how much gas the vehicle uses, the number of hours the driver is driving, how fast the driver is going, how many times the driver brakes hard, how long the windshield wipers have been used and the like. The vehicle can alert, in real-time, if the temperature has changed or if the driver is speeding or if certain parts are about to break or die, such as a condenser or battery, allowing the business owner to proactively remedy the problem.

“This prevents loss in terms of cost and time and repairs and reputation,” Dupre said.

These systems, via the data generated, also allow truck drivers to accurately report their driving logs and stay in compliance with the federal Electronic Logging Device mandate whose first deadline to meet the requirements was in December 2017, he added.

One capability from newer technology allows users have calls to their desk phone also ring to their cellphone so they won’t miss calls. This is available through Verizon’s One Talk and AT&T’s Collaborate—Enhanced Mobile.

Collaborate also expands on the traditional conference call, allows for interactive video conferencing with mobile workforces. Along with video, the technology incorporates capabilities for messaging, and passing and manipulating documents.

This product accommodates a current trend of companies moving to video and mobile training in short spurts versus all day in a classroom. Short sound-bite training videos that people can consume on the go are popular.

“Companies are looking at different ways to communicate and get information to employees or customers in a more concise manner,” Barbin said.

For business continuity in the case of a disaster or unexpected event, for instance a power outage or loss of landline service, Verizon Wireless offers cellular routers for backup Internet. In such events, they will turn on and power the network, so businesses can continue to, say, accept credit card payments.

AT&T is a wireless provider for all of the state and a fiber and local landline provider in Northern Nevada but not in Southern Nevada.

“However, in many cases, we use products and services that will ride on anyone’s fiber. So if a company has a fiber provider locally and wants to use AT&T services, we can enable their businesses with the services using fiber from their other provider,” Barbin said.

As download speeds increase with network connectivity, more and more companies are capturing and storing customer data for analysis. This also brings concerns about security of the information. Both AT&T and Verizon assist companies with protecting customer data that’s being transferred over a cellular network via a wireless device.

For instance, AT&T teams will conduct vulnerability and penetration scans to evaluate the security of a business’ network and offer tools and recommendations for augmenting it.

“It’s one the biggest concerns of chief information officers and CEOs, that this can put them out of business,” said Barbin, referring to a network breach.

While businesses in Nevada’s metropolises are demanding smart capabilities from their wireless communications devices, their counterparts in the state’s rural parts simply want and need broadband, or high-speed, Internet.

A lot of cities in the Silver State don’t have it, explained Tom Husted, the CEO of the non-profit electric utility Valley Electric Association Inc. (VEA). VEA provides electricity to more than 45,000 people within a 6,800-square-mile service area between Fish Lake Valley and Sandy Valley, primarily along the border with California. “We aim to help facilitate high-speed communications wherever we can within the state of Nevada,” he said.

VEA has been doing just that. Its wholly owned subsidiary, Valley Communications Association (VCA), has installed the infrastructure for wireless Internet in VEA’s entire service area except for Sandy Valley, Mountain Springs and Trout Canyon as of mid-February. Regulatory approval has been obtained to begin work on Sandy Valley but remains pending for the other two spots. Buildout in all, however, is expected to be completed by year-end at the latest. As for the fiberoptic infrastructure, VCA currently is installing it in Beatty and Pahrump, the first two cities in VEA’s service area to get it. Beatty will be the first such community to be fully fiberoptic equipped.

VCA also is installing either wireless or fiberoptic, depending on need, in cities outside of VEA’s service area, such as Tonopah and Goldfield.

“As the wireless gets replaced with fiberoptic, the former equipment will then be taken and redeployed in communities outside of VEA’s service area,” Husted said.

The high-speed Internet VCA is making available is 10 times faster than what these communities had before, Husted said. The wireless speed is 25 megabits per second up and down. With fiberoptic, the maximum service available today for businesses is 10 gigabits per second, but the capability is limitless. As commercial consumers need increased capacity with their fiberoptic, it can be accommodated with the infrastructure that VCA has been installing.

“The service is absolutely phenomenal,” Husted said. “The system is designed so that as more consumers come on, it doesn’t have degradation in quality.”

Broadband Internet is “a game changer” for businesses in rural Nevada, Husted said. “High-speed communications is critical infrastructure in this day and age. Demand for that is only going to increase in the future.”

That technology allowed Raj Singh and Sam Dhillon, owners of the Best Western Pahrump Oasis, to meet customer demand for fast, reliable Internet. It enabled Pahrump attorney Jonathan K. Nelson to open an office in Las Vegas. It lets Tyrus Tom, the owner/operator of six Horizon Market gas station and convenience stores in Nye County, to better manage his locations as he can remotely stream video from them in real time. It provides Andrea Little, owner of Liberty Tax in Pahrump, the ability to download tax program updates and upload clients’ tax returns rapidly, much faster than the 30 to 45 minutes it took for one file in the past.

And it kept open the Beatty Medical Clinic, the only one in town. Staffing the family practice full-time became unviable, economically. However, now with broadband, the operator Dr. Michael Reiner said he can have a virtual provider there 9 a.m. to 5 p.m. Monday to Friday and have another one physically present on a limited, as-needed basis.

The next major technology on the horizon is 5G, the fifth generation of mobile networks and wireless systems technology.

“5G will be five to 10 times faster, is what we’re seeing in tests right now, than 4G is,” Dupre said. “With 5G we’re seeing speeds over 1 gigabit per second download speeds, which is crazy, crazy fast.”

Verizon Wireless plans to launch 5G, initially as an addition to 4G LTE, later this year, first in small businesses and homes, in a number of markets, which haven’t been announced yet, Dupre said.

AT&T, by year-end, aims to have 5G in 12 major markets that also haven’t been released publicly, Barbin said.

This should help get fiber-like speeds to areas of the Silver State to which it’s difficult to get fiber.

“We can give small businesses in rural parts of Nevada [the opportunity] to get fiber-like speeds through a fixed wireless network,” Barbin said.

The speeds that are possible with 5G, for example, will allow for augmented reality experiences in a wireless environment.

“Maybe you have Google glasses on that are sharing data with you, for example that this restaurant has a special going on,” Barbin said.

For its business clients, AT&T will continue customizing communications packages that are based on their specific needs.

“Instead of one size fits all products, almost all of our deployments are unique to every customer,” Barbin said.

Similarly, customers can keep on presenting their IoT problems to AT&T. It will tackle and find solutions for them, added Barbin.

As for Verizon, its network team will continue optimizing the company’s network, like filling in gaps, in places it needs it, Dupre said. Also, the company will keep on collaborating with partners to offer new products that work on its network.

“It’s super exciting to see what continues to come out,” Dupre said. “The sky is the limit.”