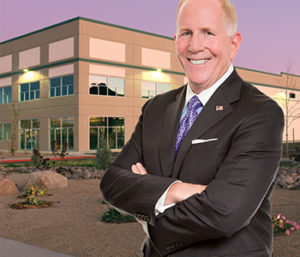 Industrial real estate isn’t static. Buildings are constructed, leased up and absorbed, vacancy rates fall and climb again, buildings constructed for one purpose end up serving another. Everything varies with the cycle of the economy.

Industrial real estate itself is a microcosm view of the industries using it.

In Nevada, indicators point to continued growth of the local economy, said John Ramous, senior vice president, regional manager, Harsch Investment Properties. Harsch has a presence in six western states and its industrial real estate projects in Southern Nevada make up the largest part of its portfolio, with just over 9 million square feet of space.

“There’s some projects being built on the retail side, there are some being built in the office sector, primarily up in Summerlin and parts of Henderson and sporadically around the Beltway,” said Ramous.

But, it’s industrial product that’s been consistently developed since construction restarted after the recession. “Right now, depending on who you listen to, there’s probably somewhere between 3 and 3.5 million square feet currently under construction, and that’s after 6 million square feet of industrial product were delivered last year,” said Ramous.

That may sound like a lot, but most of it has already been absorbed, meaning supply and demand are fairly balanced and inventory doesn’t sit for long.

“The Las Vegas industrial real estate market has transitioned from a market that was over-supplied just a few years ago to one that is expanding at a rapid pace to keep up with demand in the market. That’s a sign of continued economic activity in Southern Nevada, and should bode well for the industrial market as a whole,” said Brian Gordon, principal, Applied Analysis.

In Northern Nevada, the overall vacancy rate in Reno-Sparks is 4.83 percent. “That’s an indication of a pretty healthy market,” said Doug Roberts, partner, Panattoni Development, a statewide firm with 24 offices around the world specializing in industrial, office and build-to-suit development.

The market would be considered healthy even at a higher vacancy rate; 4.83 percent means most existing product has been absorbed. Everything has been snapped up, from land to finished product.

That’s one of the differences between today’s market and the market pre-recession: There’s an unwillingness by developers or land owners to sit on anything.

Before the recession, people might hold on to an investment. Today there’s a need to produce or redevelop or reposition an asset sooner rather than later, especially while the economy is strong.

“It can cost quite a bit to carry land or property that’s not ready to produce cash for us,” said Ramous. And besides, “You just don’t know in two or three years what may happen.”

Most projects, once completed, don’t sit vacant. The majority are preleased or leased very shortly upon completion and delivery of the building.

When a company comes in and leases a building, whether it’s under construction or finished, that eliminates the delivery risk the developer has until the building is leased up or purchased, said Michael Dermody, CEO, Dermody Properties, a national firm with a strong local presence in both Northern and Southern Nevada. The company specializes in spec development, build-to-suits and logistics. For Dermody, deciding to find land and have a building constructed increases their risk, due to time, cost of the investment, the changeable nature of the industry and the economy. A lot of companies can’t tolerate that and choose to lease existing or nearly finished buildings.

Statewide, the majority of new construction is being built on a speculative (spec) basis, aside from a few projects constructed for specific clients.

Some of the construction is determined by the speed at which today’s companies move. They may want a specific geographic location but, if the building they’re looking at is not up, they’ll bypass it and go somewhere else. “So we’re doing all spec building at this point,” said Roberts.

In Southern Nevada, probably more than 90 percent of industrial buildings over the past several years have fallen into the warehousing and distribution sector, big box spaces generally absorbed by one user. On both ends of the state, Amazon has taken big box distribution center spaces that were existing spec structures.

What’s driving the market, though, and determining the use of many spec buildings under construction, is a change in the industrial market. The Nevada market used to be dominated by warehousing and distribution, with manufacturing in the north. Today the drivers are data and e-commerce centers which come with their own design requirements.

“The e-commerce angle is a major part of our market and nationally one of the better industrial markets we’ve seen in decades,” said Roberts. “It keeps getting bigger and more sophisticated.”

E-commerce compliant buildings have larger clear height, which is space available to industrial users between floor and the lowest hanging truss or beam overhead. With clear height at 36 feet, floor slabs at least seven inches thick, and the need to be located near freeways and a strong labor force, they’re expensive to build.

Availability of land may dictate those builds as well. Internet fulfillment centers require more land and bigger buildings, where infill properties lend themselves to warehousing and distribution projects. With the changing needs of industry, developers must be flexible, producing everything from big box facilities to manufacturing space, fulfillment centers and data centers.

According to Dermody, one interesting trend in industrial real estate is to create warehouse/distribution buildings that have enough flexibility to become assembly or manufacturing buildings. A California construction materials supply company is moving into Dermody’s 225,000 square foot north Reno build-to-suit that has that kind of flexibility.

In Southern Nevada, small e-commerce companies are moving in. “It’s not always the big fulfillment centers, the 400,000, 500,000 square foot plus. We’re seeing small ones too, and that’s a positive side of that industry,” said Ramous.

There’s not a lot of smaller sized industrial product to go around. When the recession hit, most smaller properties didn’t get developed.

“There’s a lack of smaller bay sized projects being built in Southern Nevada, and the reason is, it’s much more costly,” said Ramous. It can cost double to build smaller spaces. In a market that’s not fully recovered where rates are concerned in some submarkets, buildings need to be pre-leased to justify building smaller.

“They’re businesses that are growing in the smaller size range but you know they’re going to continue to expand and that’s exactly what we are seeing throughout our portfolio. I think that’s a healthy part of the growth of the economy,” said Ramous.

“It’s important to make sure local businesses can be accommodated for the future,” said Ramous. “It’s important we don’t overlook the strength of the small and medium sized businesses that continue to grow. That’s critical for the state, the local economy, the future, and for diversification.”

There isn’t any more standing inventory in Southern Nevada than there is in Northern Nevada. The vacancy rate is between 4.5 and 5 percent overall, with no particular submarket much higher or lower.

Land for new construction is scarce. Where North Las Vegas had attractive pricing and available land a few years ago, prices have gone up and parcel sizes have gone down.

“There’s a lack of good quality developable commercial land and a lot of land we’re seeing has been picked over quite a bit,” said Ramous. “There’s challenges with standing inventory right now and, unfortunately, it gets to be more costly to build a building because there might be existing issues. Where three years ago you had five choices in an immediate area, now you have one and there’s a reason it’s still vacant.”

Very often that issue is lack of infrastructure, one of the reasons rural areas aren’t building up despite the land crunch in the metro areas.

“The bottom line is, you need the infrastructure, and expanding outside the metropolitan area here sometimes infrastructure is an issue,” said Ramous. Having utilities a half mile away from the property creates challenges that add to the time and cost to projects.

“We’re out of land,” said Roberts. “There’s only one industrial site in the entire Truckee Meadows that I’m aware of that’s ready to be developed, and [Panattoni] should close on that next month.” The North Valleys have too many hills and everything else is filled up. “That’s going to force developers, like myself, to find land outside the Reno area at some point in the next couple years.”

That may not sit well with companies moving to Nevada that want to locate in specific submarkets, though some take what they can get, said Roberts. As e-commerce expands into the Nevada market, many of the companies relocating here are coming from California for the climate, easy transportation and distribution, and lower costs. Panattoni’s North Valleys Commerce Center is home to distributors, manufacturers and an upcoming e-commerce business, all from California.

Geographic submarkets matter because companies want the best submarket for ease of working with their markets. Tenants who work with Port of Oakland, for example, want to locate in west Reno, closer to the Bay Area, to cut time and transportation costs. It’s a time saver for companies with markets in Northern California to locate in west Reno, and those with markets to the east to consider Fernley or the Tahoe-Reno Industrial Center in between Reno and Fernley. “That whole logistics study about how goods move is kind of the underpinning of our development,” said Dermody.

Dermody Properties has four buildings under construction on I-80 near the California border that will total 800,000 square feet finished in 2018.

“The project is near Boomtown, on the western side of the community and very close to San Francisco. [It is well situated for] companies that do business with San Francisco and Northern California, which are big suppliers for us,” said Dermody.

“Las Vegas is a very tight land market,” said Dermody. “Especially since the recession, Las Vegas has gotten very, very active and attracted a lot of positive attention. Part of the Governor’s initiative is for the whole state to attract industry. Nevada has a sign that says we’re open and ready for business. Cite the success of a Tesla, a Switch, an Amazon and other companies that have come in, and other companies follow. That’s what you’re seeing: quality companies.”

Now we just need to build space for them.