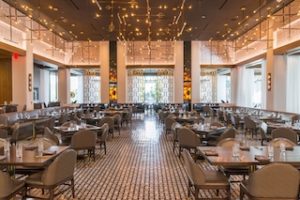 The new location was designed as an experiential destination where guests will feel like they are on the studio set, as if they are participating in the TV show. The design is a nod to both the red and blue teams featured on the show with the busy kitchen as the centerpiece.

“For the lighting, our concept was to create an environment that was reminiscent of the Hell’s Kitchen television show, where guests feel they are a part of the production,” said Brad Nelson, director of Light Theory Studios. “They can experience the drama of the kitchen and taste some of the show’s iconic dishes, including some from Chef Ramsay himself. It is the ultimate show kitchen.”

Light Theory Studio’s work on the new space began in the spring of 2017 and the restaurant opened this month. The design incorporated many floor-to-ceiling windows to capture the excitement of the Las Vegas Strip on which it is located. “One of the fun challenges with the lighting design was balancing the environment from night and day with views of the Strip on one side and the show kitchen on the other,” said Nelson. “We wanted to highlight it all without being a distraction. To accomplish this, we used lighting that can subtly change color from the warm amber glow of a candle at night to a much more cooler warm highlight during the daytime. The change is almost imperceptible but gives a unifying feeling throughout the entire space.”