You are here: Home / Features / Cover Story / Game On: The Business of Hockey in Nevada 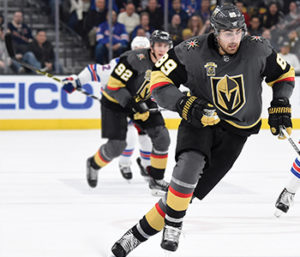 Bill Foley manages to get home from a Vegas Golden Knights game at 11:30 p.m., but his head doesn’t hit the pillow until at least 1:30 a.m.

“I’ve been in a lot of different businesses in my career and this has been the most enjoyable, entertaining and fun time that I’ve ever had in business.”

“It’s not about the public aspects and being involved in various media events and so on, because that’s not what I’m about. It’s just the fun of building the organization from the business side and the hockey side and hiring these great people that we’re now associated with.”

The newest NHL organization has had a historic first season, setting records for an expansion team, blowing by the previous record of 33 wins, winning its 34th game on February 1. The team is 36-14-4 through Feb. 9. The Golden Knights are likely en route to a playoff run, barring an equally historic stumble, as the team is leading the Western Conference and continue to turn heads with career-best statistical seasons by young and journeymen players collected during the Expansion Draft in June 2017. Now many of the Golden Knights players are missed by their former teams and fans, but were largely overlooked and underappreciated as the teams left them exposed during the Expansion Draft.

William Karlsson, who leads the team — and is third in the league — with 29 goals, scored 15 in the previous two seasons with the Columbus Blue Jackets. Multiple other players have already surpassed their career highs in goals and points, while General Manager George McPhee and Head Coach Gerard Gallant are having award-worthy seasons in their own right after being fired by the teams in Washington, D.C., and Florida, respectively. Foley has already been named ESPN’s Top Hockey Person of 2017.

The Ties that Bind

While the early success is a surprise for all parties involved, the community-focused efforts of the team were always in the plans. The Golden Knights had to become an integral piece of Las Vegas to succeed as the town’s first professional sports franchise. A hockey team, a sport played on ice, located in the desert didn’t seem to be an automatic success to some, but Foley felt differently. Before he was awarded a Vegas-based hockey team, Foley knew two things he wanted.

Those two truths led Foley to Las Vegas, a place he wanted to live; another major factor he needed to check off when he was looking for his ownership stake.

“I always thought Las Vegas was a great community,” he said. “I enjoyed my time here various times in the past. It’s been a lot of fun.”

Before making the investment into the Golden Knights — including a $500 million franchise fee to the NHL — Foley looked at other professional sports franchises. He knew he wanted a controlling interest.

“If I was going to make that level of investment I would control my own destiny,” Foley said. “They (other franchises) would all have involved me living somewhere that I might not have been as attracted to as Las Vegas, so I passed on them.”

As T-Mobile Arena was being built on the strip, talk of a new expansion team began to surface in 2014. Foley, and the Maloof family, were putting together the plans to make it a reality. Part of the planning led to a market study, which revealed at least 140,000 avid hockey fans in the Valley, largely from the Midwest and Canada.

“We knew at that point that we would have an active fan base,” Foley said.

In December 2014, the NHL granted Foley the ability to hold a ticket drive. Between February and April 2015, the ticket drive reached nearly 10,000 deposits.

“We had about 11,000 deposits for a team that didn’t exist, for an arena that hadn’t been built,” Foley said. “That shows you the dedication and the excitement that Las Vegas had for the team.”

Following the drive and through an official expansion bidding process, Las Vegas was awarded the franchise on June 22, 2016, the first new team since the NHL added the Minnesota Wild and Columbus Blue Jackets in 2000. The name was announced on November 22, 2016 and on March 6, 2017, the team’s McPhee, signed Reid Duke to be the team’s first player.

McPhee then put together the majority of the team’s roster during the June 21, 2017, NHL Expansion Draft, selecting players left available from all of the league’s other 30 teams. Despite the most favorable expansion draft rules in history and grabbing a future Hall of Fame goalie in Marc-Andre Fleury, most predicted the Golden Knights would struggle in their first year. Prior to the start of the season, the team was a betting long shot to even make the playoffs, now the Golden Knights are among the favorites to win the Stanley Cup, the league’s championship.

Following the draft, Foley and McPhee stated the team’s goals were to make the playoffs in three years and win the Stanley Cup in six.

The early success has led to a rabid local fan base ahead of leadership’s expected schedule. For home games at T-Mobile Arena, the Golden Knights fill the arena to more than 103 percent, good for fourth in the league. As a major tourist destination, there were expectations visiting teams would have large fan turnouts and, while this has proven true, the home fans have provided an electric atmosphere visiting players have commented on multiple times.

The team had the unenviable task of playing its first home game in history less than two weeks following the October 1 Route 91 shooting. The regular season started with two wins on the road, before an emotional ceremony honoring the victims and first responders of the event, capped by a speech by Golden Knight defenseman and long-time Las Vegas resident Deryk Engelland.

The game, a 5-2 win against the Arizona Coyotes, served, in at least a small way, to bring the city together during a hard time and further entrench the team as a community pillar.

The team’s success on the ice has continued to build a fan base, which now likely won’t crumble if the winning ever sputters. At the team’s Fan Fest in January, more than 10,000 people lined Fremont Street to see the players and receive autographs. The large gathering was evidence a professional sports team was long overdue in Las Vegas and the Golden Knights’ tagline “Vegas Born” is a nod to the team’s desert origins. The born in Vegas process allows residents to feel ownership with the team, a sentiment Russell Goldsmith felt early on.

The chairman and CEO of Los Angeles-based City National Bank pushed to be the team’s first major sponsor and official banking partner following a meeting with Golden Knights leadership set up by Paul Stowell, SVP and chief market strategist for City National.

A major draw for Goldsmith: the team’s practice facility and offices in Summerlin, just down the road from City National’s Nevada headquarters. Goldsmith saw a long-term partnership as a way to help build City National’s brand awareness in Nevada, since the $50 billion bank has a “branch-light structure” in the Silver State. It was a “significant step up” in marketing budget for City National in Nevada, he said.

“It was going to be a world-class facility for the team and community,” Goldsmith said. “We wanted to see that get built and support that and make sure more people in Southern Nevada understood City National is a significant company in Nevada.”

Goldsmith said, as the partnership evolved and he understood more of what Foley wanted the franchise to become in Las Vegas, he wanted to further the partnership.

While he sees big promise for professional sports in Las Vegas, Goldsmith said it is highly unlikely City National sponsors another sports organization in city.

“With the first-rate organization he was putting together, we’re a relationship bank and there was a broad range we could provide them, and it’s a two-way street,” he said. “We’re not just slapping our name on a building, we’re building the relationship with them.”

A City of Hockey

City National Arena is now packed every practice, as fans pile into the only consistently open-to-the-public practice facility in the NHL. The Golden Knights also host watch parties for many of the team’s away games at City National Arena.

Building a city of hockey is at the forefront of the minds of both Foley and Goldsmith. The team has a long-term goal of growing the amount of hockey players in Las Vegas.

The team hired a director of youth hockey and has held youth hockey clinics. The team is developing programs from learn-to-skate to youth and teenage programs to adult leagues.

“We’re going to be part of the fabric of this community for many, many years to come,” Foley said. “It’s very important to us.”

The partnership with the Golden Knights isn’t the first professional sports sponsorship for City National, which is also the official bank of the National Basketball Association’s Los Angeles Clippers. For the previous four seasons, the bank was the bank of the NBA’s Golden State Warriors, a period in which the team won two NBA Championships.

“I like to say, after we signed up, they went on to win two championships,” Goldsmith said of the company’s sponsorship “luck.”

“We’re thrilled with how well they’re performing and more thrilled with how the community has embraced them,” Goldsmith said. “Part of why we partnered with them was it would be important the first franchise in Vegas was a success, and that wasn’t clear to everybody, but we thought it would get embraced and we made the bet by stepping up.

“The challenge will be to build on the tremendous success and keep them at that high level and keep the fan support at that level and hopefully they keep winning and we can be part of a few championships.”

A Stanley Cup in a franchise’s first year would be unprecedented, but that’s not the stated goal, no matter how realistic it could look as the season nears a close. Both on the ice and in the offices, Foley said the goal is to be sustainable in the long term. The team is ahead of schedule, especially on the ice.