You are here: Home / Features / Building Nevada / Working for Workplaces: The Office Market in Nevada 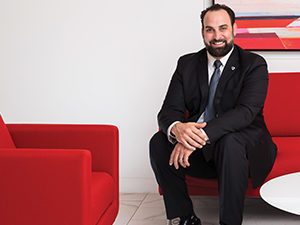 The Nevada office real estate market is set to be the most active it’s been since before the Great Recession, but one major factor could stymie the growth.

Multiple real estate professionals in Nevada said 2017 was a great year for the office market and 2018 is looking even better, but the consistent absorption has led to a lack of available inventory. Unless more office space is built, especially in the Las Vegas area, activity could dry up, said Dan Palmeri, a senior director at Cushman & Wakefield in Las Vegas.

“2018 will be the biggest year since the Great Recession and the market will continue to grow,” Palmeri said. “The biggest difficulty will be the cost of land, as many of the quality parcels are gobbled up. The land prices, especially in geographies where people want to be situated, are so high it only justifies building Class A space, which can only attract those types of clients.”

With developers on the edge whether to commit to high project costs, vacancy rates continue to shrink. At 15.7 percent, office vacancy rate in Las Vegas is at its lowest point since 2008 The 278,955 square feet, in the third quarter of 2017, of space under construction is well below historical averages, all according to the CBRE 2017 third quarter market report, the most recent available report at time of printing.

The lack of space could lead to potential tenants turning their attention way from Las Vegas. Already this year there have been instances of needing to be creative for tenants looking for space, said Brad Peterson, senior vice president at CBRE.

“The lone obstacle is inventory, there’s a few buildings being built, but beyond that there’s not much in terms of new builds,” Peterson said. “There are a few buildings planned, too, but not enough to carry and cover the demand we project. The problem already has begun, but I think it’ll be more of a problem in 2019 than 2018.”

The pinch on space was seen a bit in 2017 already and Newmark Knight Frank Managing Director Michael Tabeek said he expects 2018 to be a great year, but challenging when trying to find space for tenants looking for more than 10,000 square feet.

“It’s going to be a good year, but a tough year; tough to find locations for clients,” Tabeek said. “It will cause people to reevaluate the space they’re in. Will it make sense to try to get more efficient with the space they have?”

Despite this, the consensus is 2018 will still be an extremely active and prosperous year in office real estate.

The same sentiment goes for The Reno-Sparks region, where Colliers’ managing director Melissa Molyneaux said 2017 activity was consistently hitting above positive benchmarks and expects to experience much the same this year.

She did add the caveat of Reno being a small enough market that one deal could sway data to seem more positive than a larger market, like Las Vegas.

Still, according to the Colliers third quarter market report, office vacancy in Reno is 11.8 percent, down from more than 15 percent as recently as late 2015.

In 2018, Molyneaux expects more of the same and, perhaps, a ripple effect from major industrial investments in the area from companies such as Switch, Google and Tesla.

Molyneaux said the traditionally satellite office rich Sparks will begin to see a surge in service-type businesses looking to benefit from the swell of employees attached to the corporate investments. She cited a doctor who opened an office in Sparks, where he lives and watched the increase in traffic, predicting a need for a doctor in the area.

“I definitely think we can bank on that,” she said of new service type businesses taking up office space in Sparks.

The location of the three major corporations also led to many speculative investors buying properties in Reno, with a height of activity in 2016. By last year, Molyneaux said buyers either felt they missed the opportunity or prices were too high.

Still, potential for development in Reno is far from fizzling. Led by Switch’s investment in the former U.S. Postal Service office in downtown Reno, Molyneaux said Google and Tesla could follow, or attract other large office users to the downtown district.

Unlike many mid-sized markets across the country, both Reno and Las Vegas are not currently experiencing a drastic renaissance in downtown development for office space.

In Reno, no new office buildings have been built in the downtown business district since 1986, but with a bit of a pinch in available space, Molyneaux said office owners are taking initiative to become more attractive to potential tenants. The Class A demand and resulting success is trickling down to Class B, especially as new construction isn’t yet justifiable.

“Since they can’t justify building Class A space or have enough parking, just about every landlord downtown is doing major remodels,” she said. “People have money again and if their buildings aren’t performing like they’d like, they need to stay competitive. If they can’t build, they have to keep the building up to snuff.”

Rather than completely stymie the office real estate activity expected in the Las Vegas’ future and should a lack of new inventory persist, brokers expect activity to be pushed to downtown.

The hurdles to develop office space in the desirable outer markets in Las Vegas could push tenants back downtown, Palmeri said. The issue stems from the initial recovery of the recession, which was led by residential and industrial developers buying up desirable land at bargain prices.

The costs of land near “desirable geographies” are now prohibitive for affordable office developments.

“We have a great demand for quality Class B product, but the cost to do that deal just doesn’t make sense,” he said. “What that leads to is development won’t pace demand and it will cause rates to go up and vacancy to go down, so downtown will actually see more activity because the suburban markets will be full,” said Palmeri.

The office absorption is a result of a growing perception of Las Vegas as a big city, and a community favorable for business.

For most of its existence, Las Vegas has been defined as a tourist destination and centered around gaming and hospitality, said Palmeri. Since the recession, he said the city has diversified its economy and continues to grow its appeal to outside companies. Even the existence of the Vegas Golden Knights as well as the relocation of NFL and WNBA franchises to the city help raise Las Vegas’ national profile, both Palmeri and Peterson agreed.

“Coming from an outside point of view, no one knows Las Vegas through anything else, so you try to diversify,” Peterson said. “That’s what those teams do. It’s not direct, but direct in terms of perception. It puts us on the map and we’re seen as a bigger city.”

That perception is in part why Peterson believes there’s an added interest in the market from companies, along with the always-favorable tax laws. He expects the interest for local companies to expand and others to locate to Las Vegas will be even greater this year.

“Nevada has always been very favorable when it comes to taxes, and now you’ve got states like California that are being affected on a personal basis,” he said. “We’ve also always been locationally advantaged, being between SoCal, Northern California, Salt Lake City and Phoenix. A lot of those things that have always been in our favor continue to be so.”

The challenge now, Palmeri said, with a lack of new development, will be finding space for large office users — those with a need of more than 70,000 square feet. The lack of available inventory is a detractor when going up against larger cities competing for a major corporate location, like several Texas cities and Phoenix, Palmeri said.

A lack of space or not, Palmeri said the auxiliary amenities, like the professional sports, growing population and the planned $1.5 billion Las Vegas Convention Center expansion will continue to attract attention from companies.

“At the same time, the growth of Vegas, the hockey team, more conventions and conferences, the Raiders, WNBA, soccer team, it’s becoming less of a visitor city and more of a place to be,” he said. “A lot of what it is now is getting people educated on the actual Las Vegas community and then get them dialed in for a location that works for them.”

Like Las Vegas, Reno too has made great strides in diversification in the past decade, according to Molyneaux. Should another economic slowdown hit the nation, or Nevada, in the near future, she expects Reno to weather it better.

“The market is a little bit different than a decade ago,” she said. “We’re not just reliant on homebuilding and gaming. We still have those, but we now have Switch, Tesla.

“It’s not a slow down we’re worried about it’s, are we missing out on opportunities because we don’t have Class A space? We still have a long way to go, so it’ll be interesting to see how we bridge that gap.”

Following a decade of recovering from a deep recession, Palmeri said Las Vegas is now back to the traditional development cycle and the activity will continue to be at its highest point of the past decade.

While there is a worry there’s not enough development to match demand, there is some spec development, including the 150,000-square-foot office tower near Downtown Summerlin, which is nearly 30 percent full, according to Palmeri.

“All the local decision makers are in the suburbs and they’re gravitating there because those markets are getting the newer buildings in town,” he said. “The new stuff is providing great amenities, like Downtown Summerlin. As the younger generation is demanding more from a company in terms of amenities and services, the companies organically follow that lead.”

The consensus among brokers is, 2018 will continue to be hot in office activity, but will tighten increasingly into 2019, with no obvious relief in sight. The tight market, however, could be a boost of confidence for developers unsure of whether or not to proceed with a project, Tabeek said.