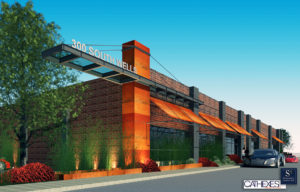 Reno – S3 Development with assistance from Dickson Commercial Group (DCG) is pleased to announce its most recent acquisition of Reno’s newest mixed-used redevelopment project at the southeast corner of Wells and Ryland. The 39,816 square-foot office building was purchased by S3 Development for $4,400,000. The building has visibility along both Wells and Ryland, and provides quick access to both major freeways, Downtown Reno and Renown Hospital.

Dominic Brunetti, CCIM and Scott Shanks, SIOR represented the buyer, S3 Development, a visionary frontrunner in the pursuit of bringing leading-edge, modern housing and commercial developments to the Reno/Sparks area, and a key player in the revitalization of downtown and midtown. Tom Fennell, CCIM; Travis Hansen, CCIM; and Chris Shanks, CCIM of DCG represented the seller, Scharff Family Trust, in the disposition of the building. This sale marks another large acquisition completed by DCG in Downtown Reno for a new mixed-use project.

S3 Development’s plans are to build out the vacancies to accommodate a mix of office, retail and medical office suites. Other work will include a new facade and exterior look, new landscaping, remodeled outdoor courtyard (swings, BBQ, dog park and other fun amenities) and a new parking lot. Dominic Brunetti, CCIM and Travis Hansen, CCIM have been retained as the leasing agents by S3 Development.

“We are very excited on this acquisition and rehabilitation of this project,” said Blake Smith, president of S3 Development. “It was really a ‘sleeper’ of a building. The 34 feet high interiors are amazing with contemporary and hip tenant improvements.”

About S3 Development:
S3 Development is 25 years in the making and is spearheaded by the founder, Blake Smith, pioneer and developer of the award winning Somersett Master Planned Golf Community. The company is a visionary frontrunner in the pursuit of bringing leading-edge, modern housing and commercial developments to northern Nevada as well as being a key player in the revitalization of the Downtown and Midtown districts in Reno.