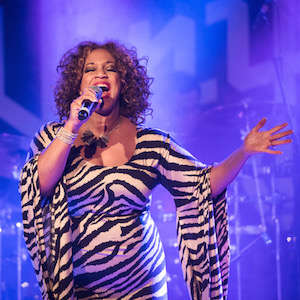 Michelle Johnson’s soaring vocals and ability to engage an audience in a dynamic, personal and intimate way have made her a favorite in cabarets and performing arts centers nationwide. She has performed on Broadway and has appeared in and executive produced several sold-out shows at Myron’s Cabaret Jazz at Las Vegas’ Smith Center for the Performing Arts, including “Tapestry Unraveled” (a tribute to Carole King), Forever Purple (an all-star tribute to Prince) and “Strictly Taboo” (celebrating the great women of jazz). She also appeared there with popular artists including Clint Holmes, David Perrico (Pop Strings Orchestra) and Lon Bronson.

The show’s musical director/conductor and arranger, Joe Escriba, has worked with some of the entertainment industry’s biggest stars including Celine Dion, David Foster, Diana Ross, Don Henley and the O’jays.

Tickets start at $22 plus taxes and fees. To purchase tickets, call The Smith Center’s box office at 702-749-2000 or visit https://www.thesmithcenter.com/event/michelle-johnson-spotlight/.

Michelle Johnson’s unique voice, versatility, affinity for languages and impressive range have made her a rare find in the music business. She grew up primarily in Cairo, Egypt, and later graduated from Yale University. Her career path, originally bound for Harvard Law School, rerouted when her passion for the entertainment industry won out. She is collaborating with Grammy Award-winning producer Kamau Kenyatta, who is known for his producing credits for Grammy winner Gregory Porter.