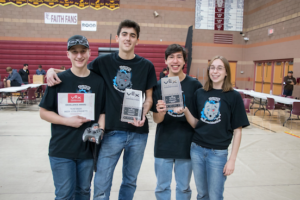 Tronox, a manufacturing plant in Henderson recently donated $5,000 to benefit students in the robotics club at Basic Academy of International Studies.

The donation assisted the program by providing students with an extracurricular activity that will brighten their futures. Due to the generous donation, Basic Robotics Club hosted six competition teams this year alone, which is two more than the previous year. The club now has 22 members, which is the strongest group to date.

Last weekend, Basic’s X Team dominated Faith Lutheran with a 12-1 record. The VEX Tournament hosted 58 teams from Nevada and California, and was the largest tournament ever held in the state. The X Team received the Excellence Award, which is the highest honor in VEX Robotics.

Basic Robotics Club has won two of the last three tournaments, which qualifies three teams to compete in the National Robotics Championship in April.

“It is wonderful to see that our donation has allowed the students to thrive and make great strides in their robotics program,” said Rick Stater, Tronox’s Henderson plant manager. “We are proud of the work that the students and advisors continually accomplish together, and are happy to assist in any way to further their learning opportunities.”