You are here: Home / Press Release Wire / Top professionals re-elected to board of NCET 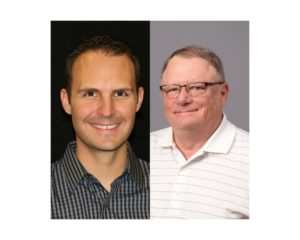 Matt Brown and Jock Ochiltree have been re-elected to the board of directors of NCET, a member-supported non-profit that produces educational and networking events to help people explore businesses and technology.

Brown, re-elected as NCET’s vice president of blog content for a fourth consecutive year, works as communications program manager for the City of Reno. An award-winning journalist, he previously worked as editor and associate editor of Nevada Magazine, as a reporter and copy editor at the Reno Gazette-Journal and as sports and outdoors editor at The Sierra Sun in Truckee.

He is a graduate of California State University, Chico.

Ochiltree has been elected as NCET’s vice president of events services.

Ochiltree is a Realtor with eXp Realty in Reno. He also has worked 11 years as a real estate agent in Jacksonville, Fla. During a 34-year career in the technology industry, Ochiltree held positions as chief executive officer, president and other management positions with numerous companies. He also has worked with a Sacramento business incubator.

“Matt and Jock are consummate professionals whose skills and experience benefit all whom they serve,” said Dave Archer, president and CEO of the nonprofit. “We are fortunate that they continue to serve NCET, further strengthening its board and its mission.”

NCET, Northern Nevada’s largest networking organization, is a member-supported nonprofit organization that produces educational and networking events to help people explore business and technology. NCET’s award-winning programs include the annual NCET Small Business Expo and NCET Tech Awards, and the monthly Biz Bite, Biz Café and Tech Wednesday events. NCET is funded by memberships, sponsorships and program revenues, and receives no state or Federal funding. NCET is not affiliated with the State of Nevada or the University of Nevada. For more information, visit www.NCET.org.