You are here: Home / Press Release Wire / The Last-Last Friday of the Year Rings in a Pre-New Years Bash Perfect for the Whole Family in Downtown Henderson as Donut Mania Dunks into Water Street 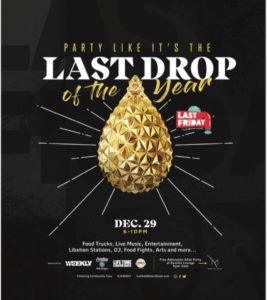 Last Friday presents larger than life personality, Brett Raymer, and his Donut Mania foodie pop up featuring the city’s best elevated donut menu with gourmet flavors such as Oreo Cookies N Cream, I Dream of Reese’s, Key Lime Pie, Maple Bacon Bar, Boston Cream and more! Meet Brett and get served the tastiest, biggest and freshest donuts in the valley!
This month’s event will also continue to feature the much-celebrated Friday Night Food Challenge, hosted by Season 12 Hell’s Kitchen Winner, Chef Scott Commings, at the main stage with ample seating and lighting to the enjoyment of food enthusiasts everywhere. The foodie challenge consists of a series of secret ingredients and items preselected to prepare 1-2 menu items in 45 minutes or less, judged by three local judges. The judges are food writers, critics, members of media or industry related professionals.

Last month featured Chef Robert Lomeli and Chef Edward Tallman battled for the salami and this month Chef Jainine Jaffer battles Chef Lloyd Bansil. Chef Jainine Jaffer, is well-seasoned in many world cultures and cuisines, with special concentration in South Asian (Pakistani, Indian), Middle Eastern, Mediterranean, Greek, Italian, Moroccan and Latin flavor profiles. Chef Jainine is one of the city’s most sought after private chef and caterer in world cuisine. Chef Lloyd Bansil has over 20 years of experience as an Executive Chef at various locations on and off the Las Vegas Strip. He has been a chef in many of Las Vegas top restaurants and resorts including Hakkasan at MGM Grand, Caesars Palace, Red Rock Hotel and Momofuku at The Cosmopolitan of Las Vegas, only to name a few.

The live music line up for this event includes performances by Toxsin, Haylie Furse, Khrystina Chapman and Dana Trueman sponsored by Sam Ash Music & Ecolife Development.
In addition, Last Friday is sponsoring the nonprofit, Fraternity of the Desert Bighorn (http://www.desertbighorn.com/) to participate and support as our non-profit partner for the month. Founded in 1964 by a handful of concerned advocates when the Desert Bighorn Sheep population in Nevada was at a historic low of less than 2,000 animal to recover Bighorn Sheep populations in Southern Nevada – now more than 11,000 animals. The FDB is the oldest wild sheep conservation group in the world – founded right here in Las Vegas in 1964. It has been recorded that 68 different wildlife species utilize these water resources. It is estimated that at one point, more than 50,000 bighorn sheep once roamed the mountains of Nevada.
General admission to the Last Friday, JAWS Festival is complimentary. Last Friday was founded to resurrect and celebrate the community’s emerging arts and culture. The City of Henderson and other deep seeded Henderson community driven partners such as the Las Vegas Weekly, Findlay Las Vegas Volkswagen, M Resort, Lotus Broadcasting and Lifetime Athletic – Green Valley sponsor our Last Friday event this month. Other sponsors include Verizon and Helix Vodka. Join Last Friday and bring the whole family! www.justaddwaterstreet.com

About City of Henderson
Incorporated in 1953, Henderson is Nevada’s second largest city with more than 302,000 residents. Henderson is a premier city, nationally recognized for its stunning parks, trails, master-planned communities, outstanding quality of life and patriotic past. Recognized as one of America’s Best Places to Live (MONEY and Liveability.com), one of America’s Best Cities (Business Week), one of the top six safest cities in America (Forbes, InsuranceProviders.com, Law Street Media, Movato.com), and a Bicycle Friendly Community (League of American Bicyclists), Henderson is a progressive and vibrant city committed to maintaining premier amenities and services for all who choose to live, learn, work and play in Henderson…a place to call home.

About Last Friday, Just Add Water Street
Last Friday is a community-centric initiative to inspire an ongoing effort between all sectors of Henderson both private and public with the historic Water Street District in the City of Henderson for the betterment of sustainable community growth while giving back. We look to cultivate and create a community driven, family-friendly event that inspires meaningful relationships and opportunities for all. Last Friday, Just Add Water Street aligns with those organizations, groups, and individuals who are engaged across all Southern Nevada for the betterment of creating a diverse yet meaningful experience for Henderson, one of the top six safest cities in America (www.insuranceproviders.com/the-10-safest-cities-in-the-united-states/). Visit www.justaddwaterstreet.com. Follow Last Friday on Facebook at www.facebook.com/justaddwaterstreet, Instagram @LastFridayHenderson, and Twitter @_justaddwaterst #JAWSNV