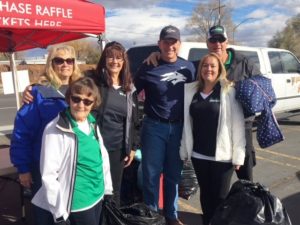 Reno, Nev. – Thanks to the generosity of the general public, as well as employees and clients of First Independent Bank, hundreds of children in Northern Nevada received warm coats for the winter.

Every year, The Hot August Nights Foundation collects new and gently used winter coats for children in need. For the third year in a row, First Independent Bank has joined the foundation in this effort to benefit the Boys and Girls Club of Truckee Meadows.

A total of 250 coats were collected during the month of October at First Independent Bank locations in Reno, Sparks, Carson City and Fallon.

“The public’s support of this coat drive is a great illustration of the caring community in which we live,” said Bob Francl, Executive Vice President, Regional President at First Independent Bank. “Because of this drive, we know that hundreds of children who need a warm winter coat will have one.”

In addition to the coat drive in October, the Hot August Nights Foundation’s coat drive on Saturday, November 4, 2017, and subsequent donations thereafter, have pushed the number of coats collected by the foundation to 343. This year, colleagues from Harrah’s and Harvey’s at Lake Tahoe also participated in collecting 107 coats.

The 700 coats from the combined coat drives were delivered to the Boys the Girls Club of Truckee Meadows and presented to families during the organization’s Thanksgiving dinner event.