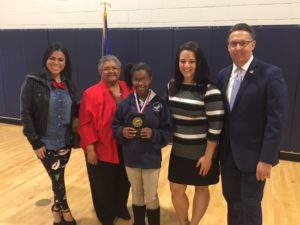 Jamerson, an 8th grade student, correctly spelled “ricochet” in the 26th round of the Legacy Traditional School – North Valley Spelling Bee, held on Friday, December 15, 2017. Jamerson beat 16 other students in grades 5-8, who had each won their classroom competitions, to prevail as champion.

“We’re so proud of Ivoryonna and are so happy she’s Legacy Traditional School – North Valley’s very first Spelling Bee Champion,” said Tom Ellis, the school’s principal. “She has worked incredibly hard to study and prepare for this competition, and her dedication to the pursuit of academic excellence sets a great example for her fellow students.”

The spelling bee, which was held in accordance with the rules and regulations of the Scripps Spelling Bee, is an extension of Legacy’s commitment to quality education delivered through an accelerated, back-to-basics curriculum.

With this win, Jamerson advances to the regional spelling bee which is expected to be held at Bishop Gorman High School in February.